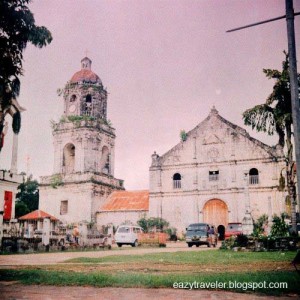 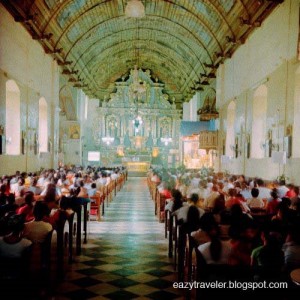 Argao, my mother’s hometown, is one of the most charming towns in southern Cebu. Known for its baroque-rococo Church of St. Michael the Archangel that boasts of detailed ceiling frescoes and a grand retablo, all within the well-preserved colonial town plaza, we’ve frequented this place for years for quick vacations and to visit relatives, both living and dead. 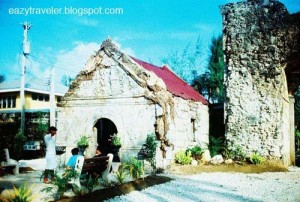 The town, established in 1608, is one of the oldest in Cebu. Along the eastern coast of the island, it is approximately a two-hour drive south of Cebu City. One of the surprising finds in this quaint town is the recent rediscovery of an 18th-century chapel for unbaptized dead children, across the Church. Said to be as old as, or maybe even older than, the Church (built in 1734), the chapel was revealed when they tore down a concrete wall along the perimeter of a hospital. Thought to have been destroyed, the limestone structure was forgotten by the old townsfolk and, since it was barricaded by a high wall, the neglected sanctum was soon enveloped with thick roots and foliage. 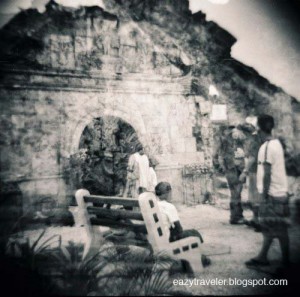 Similar to the Church, the facade’s pediment is decorated with unique symbolic stone reliefs, including a young St. Michael rescuing a baby from the gaping mouth of a demonic head. Also, a human skull with an hourglass, flanked by a sword and laurel, sits above the arched entrance. Other details are large vases with floral motifs along the sides of the facade, as well as on the inner altar. This old chapel of lime mortar and coral stone, concealed by the walls of the out-patient department (OPD) for 40 years, was used as a mortuary, where folks from the highlands would have their wakes for the dead, before burying them at the nearby cemetery. Wakes for dead criminals were also said to be held here. But, according to an on-line forum discussion more than a mere mortuary, this was most likely a rare Capilla de Sacrificios, a special chapel where the 3 A.M. prayer or tercento was sung for stillborn infants, as indicated by the facade reliefs. Moreover, the altar is tinged with indigo, a symbol of innocence. This was probably where mothers poured their grief for their children and where townsfolk lamented the loss of their loved ones to calamities and epidemics. Now in plain sight, the once abandoned chapel has regained its rightful place in the town plaza, escorting the Puerta Marina stone arch that leads to the sea.

It is a nice drive along the southeastern coast of Cebu, with mangrove coastlines, rugged mountains and some colonial houses on the way. To get to Argao from Cebu City, take a Ceres bus (P55)–one of the safer bus lines– from the South Bus Terminal near Elizabeth Mall. Just watch out for crazy buses. For places to stay and other information, visit Argao Tourism.