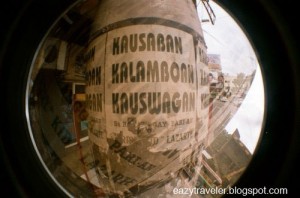 When I was younger, I remember accompanying my mother to downtown Cebu to shop for cloth and other supplies for our small tailoring family business. At the heart of this locality is the pari-an, a term used to denote the old Chinese district in established Philippine cities. Pari-an and Colon Street–the oldest in the Philippines–used to be the center of cultural, business and social activity in the country’s first Spanish settlement. Named after Cristobal Colon or Christopher Columbus, Colon Street was constructed in 1565 by Spanish conquistador Miguel Lopez de Legazpi. 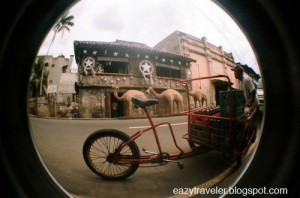 Now crowded and run-down, it was lined by fashionable stores, office buildings and movie houses. Many universities were built along or near this lane, like the oldest school in the country, the University of San Carlos. This was the glittering heart of downtown Cebu. Through the 20th century, the tartanillas (public utility horse-drawn carriages) were soon replaced by jeepneys and taxis; and commerce and trade eventually moved uptown as large malls and shopping centers sprouted inland.
However, the old street remains to be a paradise for shoppers seeking for the best bargains in the Metro. Most of what remained of Colon’s glorious days are long destroyed, abandoned or reduced to historical markers along its sidewalks. Only a handful of colonial homes still stand hidden amidst the district’s changing urban landscape: the oldest dated house in the country, The Jesuit House of 1730; the 18th-century Yap-Sandiego ancestral house; and the well-preserved 19th-century residence of the city’s first Filipino bishop, Casa Gorordo (landline: +6332 2555645; international tourist: P70). 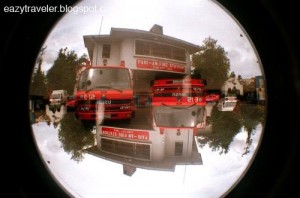 At the center of the district, the Heritage of Cebu Monument, a magnificent sculpture illustrating Cebu’s rich history, now rises over the plaza across the Pari-an Fire Station where the St. John the Baptist Church used to stand.
The best time to visit Cebu City is during the Sinulog Festival held every third Sunday of January. Celebrated in honor of the Santo Niño or Holy Child Jesus, it is the grandest festival in the Philippines. Pari-an is an hour’s drive from the Mactan International Airport, and very accessible by public transportation from all points in the Metro.
For more information on Metro Cebu, visit http://www.cebucitytourism.com

2 Replies to “Pari-an of Cebu”