Laid-back Baguio locals may wax nostalgic about their home city’s cooler temperatures and easy traffic along Session Road back in the 1980s and decades before, but Burnham Park–the heart of how I remember this century-old mountain city located 250 kilometers north of Manila–still retains much of its rusticity and charisma. 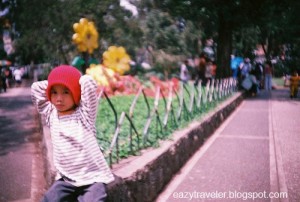 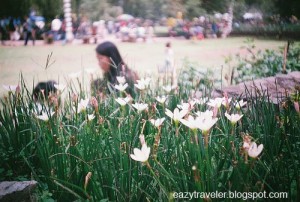 Named after American architect and urban planner, Daniel Hudson Burnham, who laid down the city plan, this sprawl of pine trees and weeping willows has a rectangular man-made lagoon of an interesting green hue where one can take relaxing rides on a rented boat (paddle boat: P60, pedal boat: P100, 30 min.) Streetfood, knitwear, silver-craft jewelry, marionettes and other knickknacks are peddled along its pebbled concrete pathways as lovers snug into each other arms, dreamily watching families gleefully steer their swan and dragon-like boats over mossy waters. On the side gardens, you can find a bicycle that fits your taste with the buffet of colors, shapes and sizes available for rent as well. 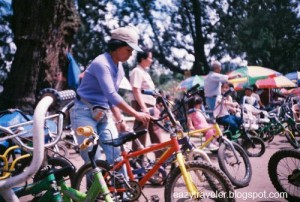 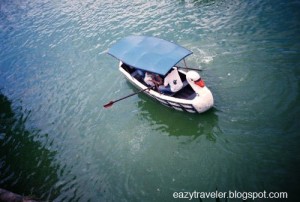 Celebrating its centennial next year (1909-2009), Baguio City was founded by the Americans in the early 1900s on the site of a local Ibaloi village called Kafagway. It has proven its resilience for decades even after a horrible war and the great earthquake of 1990. Coming from the Ibaloi word bagiw meaning “moss”, the city perched 1500 meters above sea level has a cool climate all year round, becoming the quintessential “Summer Capital of the Philippines”, since 1903. 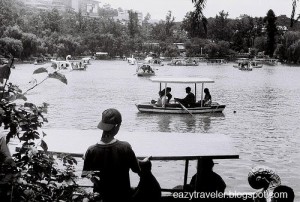 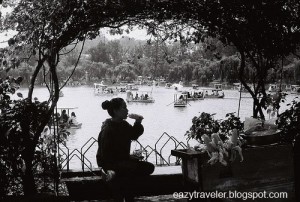 Victory Liner buses (P380, six hours) shuttle passengers 24/7 between Metro Manila and Baguio City, with one bus leaving almost every hour. One can depart from their Pasay or Cubao station, the latter a bit of a walk along EDSA from the Araneta Center-Cubao MRT station (P15). For the jetsetter, Asian Spirit has one-hour flights as well.

In this busy capital, the efficient way to get around is by taxi, which surprisingly has low rates at P25 flag-down and P1.50 increments. These spacious taxis are usually not air-conditioned, but you won’t mind rolling down the windows to enjoy the breeze with a whiff of pine. Having city map like this one will help you navigate around the winding and circuitous roads. Baguio City, the seat of the Cordillera Administrative Region, is a popular jump-off point to other tourist hotspots in the region such as Sagada, Mountain Province and Banaue, Ifugao Province.