Built in honor of Cebu’s “Grand Old Man”, Sergio Osmeña–the fourth president of the Commonwealth of the Philippines– and to commemorate the city’s first waterworks system, Fuente Osmeña is a fountain rotunda where major thoroughfares converge: Gen. Maxilom Avenue (aka Mango Avenue), Osmeña Boulevard (aka Jones Avenue, towards downtown) and B. Rodriguez Street. The oval was built in 1912. 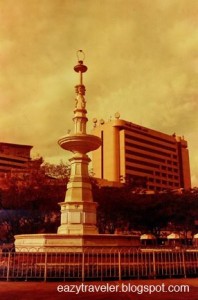 Since the 1980s, this was where anti-Marcos and other political demonstrations were held. Before malls became popular in the mid-1990s, many Cebuanos also spent their leisure time here sitting at the concrete benches under the mottled shade of narra and mahogany. The white, slender fountain is the centerpiece, around which a roller-skating rink once encircled. Today, the park is still a popular place for concerts and other socio-cultural activities especially during Christmas and the Sinulog Festival. 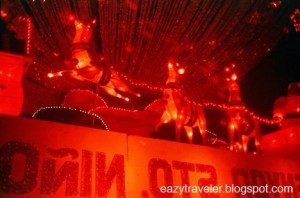 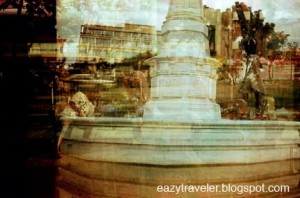 During the holidays, a giant brightly-lit Christmas tree stands at the park. And during the Sinulog Festival, a decorated altar in honor of Sto. Niño or Holy Child Jesus stands at the Osmeña Boulevard intersection, sponsored annually by Penshoppe, a local fashion label. Moreover, the wide roundabout makes this area a perfect place to witness the culminating mardigras parade in, one of the largest in the country. 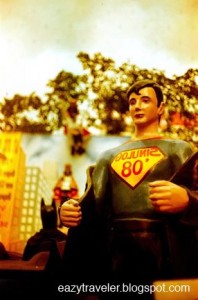 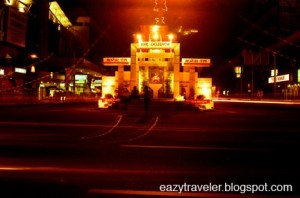 Uptown Cebu is an hour’s drive from the Mactan International Airport, and very accessible by jeepney or taxi from all points in the Metro. Jeepneys (minimum fare: PHP 8.00) plying between downtown (like Magallanes and Colon) and uptown (like Labangon and Guadalupe) pass through Fuente Osmeña.
Other points of interest surrounding rotunda are Robinson’s Mall, Cebu Midtown Hotel and Crown Regency Hotel, the tallest hotel tower in the Philippines. Be careful when crossing the roundabout and watch out for speedy vehicles who don’t easily yield to pedestrians.