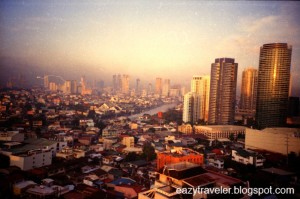 This article was first published in the premiere issue of ROAM, a Manila-based magazine for alternative travel and outdoor enthusiasts.

While the mere thought of skipping leisurely through Old Manila’s thoroughfares might seem daunting or perhaps even frightening to the uninitiated, such an experience provides an invaluable insight into the history, culture and culinary landscape of one of the most vibrant capitals in the world. (Well, the 69th in Lonely Planet’s The Cities Book. Still not bad, out of 200).

The grind of time may have worn away the elegant sheen of the Pearl of the Orient, but every urban nomad with a little perseverance will be able to glean its inherent flair and pulchritude behind its gritty montage and mad cacophony of street life. Let’s scoot off to Bautista, Benavidez and Escolta to absorb all the sights, sounds and savors of Manila today. 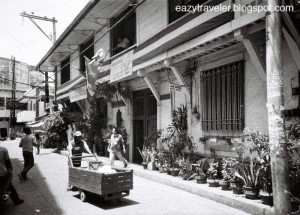 On the tamer side of Quezon Boulevard, the echoes of colonial domesticity and fortune still linger within the old homes of Quiapo. While many have suffered the slow death of neglect and the doom of uncaring government-sanctioned demolitions, some domiciles prove to be heritage conservation successes amidst the raucous of jeepneys, fruit vendors, political rhetoric and hawkers of bootlegged videos that clog the narrow streets that were once the most beautiful in all of Manila.

One such domicile sits off Hidalgo Street: The Bahay Nakpil-Bautista at Bautista Street (formerly Barbosa). Built in 1914 by Dr. Ariston Bautista and Petrona Nakpil and designed by Arcadio Arellano, the house is a Spanish-Filipino bahay na bato (house of stone) in Viennese Secession style, an architectural approach that reinterprets floral forms in a linear, more abstract manner. This streamlined design was considered ahead of its time, differentiating itself with the more representational, curvaceous Baroque preference of most Filipino houses during this period.

The well-kept facade of the Nakpils stands in contrast to its worn-out neighbor: the Boix House. The elegant structure with Neo-Renaissance floral motifs was built in the 1890s by Spanish-French aristocrats and was eventually inherited by the Jesuits. Today, it has become a crowded apartment-cum-boarding-house. The interior, presumably renovated in the 1950s, is still intact with balusters, kamagong staircase and wide narra floorboards. 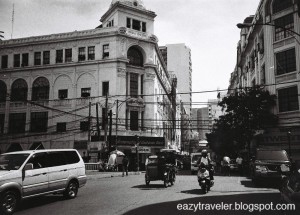 Another pride of Old Manila is good ol’ Escolta. Upon entering this thoroughfare from Sta. Cruz, one will notice two old sentinels guarding its gates, a pair of unpretentious pre-World War II structures standing by its entrance near Plaza Lacson, along the concrete banks of Estero de la Reina: the Regina Building and Perez-Samanillo Building.

Built in 1934, the former is a neo-classical piece that housed some of the financial institutions that powered the commerce of business that prospered along Escolta during its heydays. The latter, an Art Deco work adorned with Meso-American and Indochinese motifs, was built in 1930. It was designed by Andres Luna de San Pedro, son of patriot-painter Juan Luna.

Strolling through the run-down buildings, one can only imagine the posh establishments, bright-light cinemas like Lyric and Capitol theaters and attractive trams that once pulsed through this main artery. If all this imagining gets you hungry, grab a merienda at Polland Hopia Café or Savory Restaurant near the Pasig River Ferry station.

If you’re hungry for what the streets of Manila have to offer, you can chomp your way through the hole-in-the-wall food joints of the quintessential district of Manila Chinatown to rediscover one of the Chinese legacies in the Philippines.

After browsing through the jewelry stores, medicine shops and vegetable carts along Ongpin Street up to the Basilica de San Lorenzo Ruiz and Plaza Calderon dela Barca, tired travelers can refuel at the sumptuous food selections at one of the many side streets. Most of these gastronomic delights are tucked away along Benavidez and Salazar Streets.

At Benavidez, start off with Masuki Mami Restaurant. Since 1930, their famous original chicken mami has been a popular do-it-yourself favorite (Tip: Split a bowl with a friend, if you’re planning to food hop. Learn to pace yourself). Further down the street is Waiying Fastfood, where a generous serving of yummily moist shrimp chong fan will surely delight your palate in this two-level dimsum restaurant. Noodle lovers will revel at Lan Zhou Lamien. They have good boiled dumplings here, but, of course, this place is famous for its noodle soups made from hand-pulled “lamien”, which is a treat in itself to watch as you wait for your order. Much like a magic show, the cook expertly pounds, powders and flips the dough into strands of noodles readily tossed into pots of boiling water.

How about dessert? For sweet teeth, there’s Xinyilong Bakery. Amaze your inner child with the kaleidoscope of glossy cakes, pastries and baked products this Bread Talk of Chinatown has to offer. Try some spring onion cake rolls and a bottle of imported kiwi fruit drink that interestingly doubles as a snow globe with kiwi seeds in colloidal suspension.

A preview of sorts, this amalgam of insights and tips will hopefully whet your appetite to explore more of Old Manila, or perhaps rediscover firsthand its inconspicuous qualities that make it a one-a-kind fusion of old and new, of East and West, of the strange and commonplace. 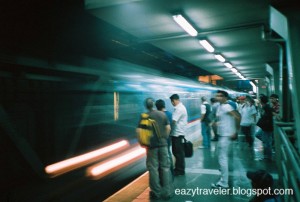 HOW TO GET THERE?

Let’s get ready to ramble! It’s easy to get around Manila aboard public transportation. One can find his way to these streets via jeepney, bus, taxi or even the river ferry. Bautista, Escolta and Benavidez Streets are accessible from the Carriedo LRT station. Alighting at the station, traverse Plaza Lacson to get to Escolta. Turning right at Plaza Lacson will take you to the Carriedo Fountain in front of the Sta. Cruz Church, where the arched entrance to Chinatown can be found.

Residential Quiapo is on the eastern side of Quezon Boulevard, across Quiapo Church. To get to Bautista, one can get off a jeepney across the church, or coming from the LRT station, cross the underpass, then walk down Hidalgo Street and turn left at Bautista, the first intersection. When exploring the labyrinthine streets of the city, remember to dress down and carry only the bare necessities like your camera, city map and water bottle. Also, always be alert!

A more interesting way to get to and away from Old Manila is by air-conditioned Pasig River Ferry, which unhurriedly carries passengers from as far away as Pasig City to the mouth of the river at Intramuros. Get down at Quiapo or Escolta station. On route, you will get unique views of the Makati Central Business District, Malacañan Palace and the Post Office Building.

Need a walking guide? Or like-minded company? Carlos Celdran and Ivan ManDy can surely walk the talk with eye-opening and vastly entertaining walking tours of Manila.

4 Replies to “The Labyrinth Called Manila”