Every first to third week of September, the Peñafrancia Festival takes place in Naga City, the pilgrimage center in southeast Luzon’s Bicol region, where millions flock to venerate the grand patroness Our Lady of Peñafrancia for the past three centuries. This year’s Peñafrancia marks the tercentenary anniversary (1710-2010) of Bicol’s devotion to the Virgin fondly called Ina or Mother. 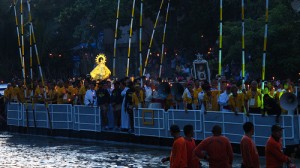 Fluvial procession along the Naga River 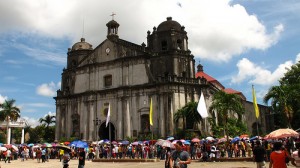 Pilgrims queue to venerate Our Lady at the Naga Metropolitan Cathedral 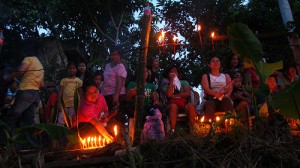 Devotees flock the riverbanks for the fluvial procession

The highlights of the festival are the Translacion and fluvial procession. In the Translacion, which occurs on the second Friday of the month, the image is transferred from the Basilica to the Metropolitan Cathedral by barefooted male devotees called voyadores. After the nine-day novena (on the third Saturday), the image is returned to the Basilica on a barge pulled by baroto (rowboats) along the Naga River, whilst crowds watch along the city bridges and riverbanks lighting candles and crying, “Viva la Virgen!”

HOW TO GET HERE: Several airlines fly to Naga from Manila. Peñafrancia Tours (Tel. +63 2 4803050) have daily bus trips to Naga (single-seater bus: PHP 800, 8 hours) from the bus terminal beside Ali Mall in Cubao, Quezon City. Other bus companies are Isarog, Cagsawa and RSL. Their ticketing offices are all at the Cubao terminal. When booking bus rides to and from Naga for the Peñafrancia festivities, book as early as July or August.