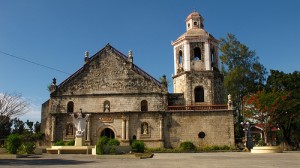 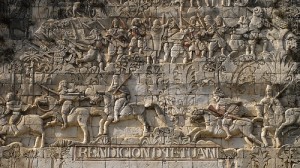 Detail of facade bas relief depicting the Battle of Tétouan 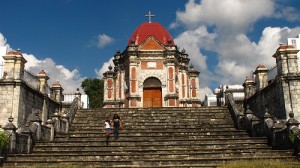 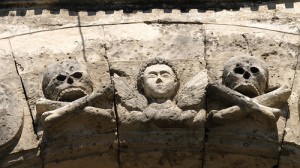 The southwestern towns of Iloilo boasts of exquisite colonial architecture. While Miag-ao Church gets all the limelight as a UNESCO World Heritage Site, the religious edifices of neighboring San Joaquin deserves equal admiration, and are one of best examples of Spanish colonial architecture in the Philippines.

Built in 1869, San Joaquin Church is the only military-themed church in the Philippines. Its facade portrays an impressive bas relief of the Battle of Tétouan in 1860, when the Spanish army defeated Moroccan forces. Another imposing structure is the San Joaquin Cemetery built 1892. A fusion of European Baroque and Oriental architecture, this cemetery is the grandest and best preserved in Iloilo.
HOW TO GET HERE: From the transport terminal in Molo district, Iloilo City, take a bus or van (45 minutes) bound for San Jose, Antique. There are also Iloilo-San Joaquin jeepneys. Along the way, you can stop by the Spanish churches at the towns of Tigbauan, Guimbal & Miag-ao.