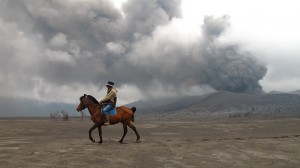 A Tenggerese horseman rides across the Lautan Pasir (Sea of Sand)

Since January, Gunung Bromo has been continuously belching lava and ash. During our visit to the park last week, the volcano periodically explodes, sending shock waves that ripple throughout the Tengger Caldera. At Cemoro Lawang – a village on the caldera rim where tourists stay, windows and ceilings would rattle with every thunderous explosion day and night. 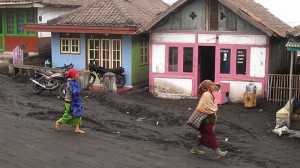 The powerful eruption last January 22 significantly affected the tourism and agriculture in the area. Twelve hotels were damaged and crops were devastated.

The Bromo-Tengger-Semeru National Park is a top tourist attraction in Indonesia, and one of the most dramatic natural landscapes in Asia. The park features an enormous 16-km wide caldera of volcanic sand, cinder cones and two active volcanoes, Gunung Bromo and Gunung Semeru. 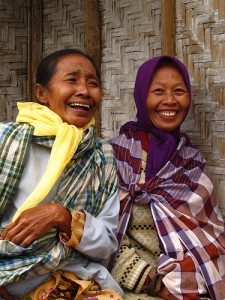 Tenggerese women brighten the atmosphere with their friendly smiles

The caldera is also the stronghold of the resilient Tenggerese, descendants of the Hindu empire of Majapahit, which reigned throughout archipelagic Southeast Asia from the 13th to 16th centuries. The Tenggerese practice Hinduism with Buddhist and animist influences. Named after Brahma, the Hindu god of creation, Gunung Bromo is a sacred mountain, which the Tenggerese believe erupts when the gods are angry. 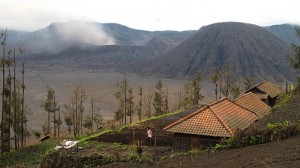 How to get here: The most convenient way to get to Cemoro Lawang, the base for exploring the park, is via Surabaya (10 hrs by railway from Jakarta) then Probolinggo. The southern approach (as explained by Lonely Planet Indonesia) via Malang (8 hrs by railway from Yogyakarta) and Ngadas village then across the Sea of Sand is a more difficult but rewarding route.

Where to stay: Hotels overlooking the caldera are expensive. You can always enjoy the view at their restaurants like the Mountain View Lodge. We rented a small Tenggerese house with two-bedrooms, which can easily fit 4-6 people for only IDR 150,000 (PHP 750) a night (Contact Triana, +62 85749684353).

What to wear: Temperatures at Cemoro Lawang can drop to as low as a few degrees Celsius over zero at night! Layer up with thermals, sweaters and a parka. 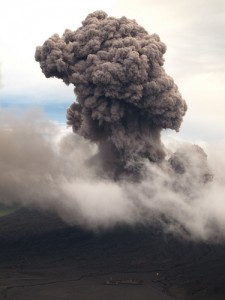 How to get around: One can explore the Lautan Pasir, Poten Hindu Temple and other sights on foot, on horse or on ojek (motorcycle). For the sunrise viewing over the caldera, one has to ascend to the viewpoints of Gunung Penanjakan. The second viewpoint is the more accessible one. It can be reached on foot in less than two hours (Bring a flashlight/headlamp at night). We hired Tenggerese ojek drivers to fetch us at our homestay at 3:30 AM and drive us up to the second viewpoint to watch the sunrise (IDR 50,000 or PHP 250, prices negotiable; Contact Jono, +62 85257317541). Weather can be unpredictably cloudy outside the summer season (June to September), but don’t fret if the view clouds over. You can either wait it out, or return to Cemoro Lawang and when the view of the volcano from the village clears, quickly hire an ojek to return the viewpoint like I did.

Volcano eruption warnings: Before visiting the park, check the current status of Gunung Bromo by visiting http://www.indonesia.travel/ or http://http://wikitravel.org/en/Mount_Bromo Better yet, try to get in touch with hotel staff or local residents.