The following article is a commissioned article I wrote for this month’s issue (February-March 2011) of SMILE, the in-flight magazine of Cebu Pacific Air. You may browse the magazine online at http://www.cebusmile.com

ALONG WITH being the habitat of bankers and shopaholics, Hong Kong has now become the playground for all sorts of artists. Fueled by a bullish world economy, the former British colony has established itself in recent years as a top destination for dealers and collectors from around the world.

The bustling metropolis not only hosts the most prestigious and renowned international fairs, it also boosts artistic and cultural opportunities for artists and art afficionados alike, investing billions of dollars on a brand new utopia for the arts: The West Kowloon Cultural District (www. wkcdauthority.hk). This is is a city sector built on reclaimed land that will be devoted to art museums, concert halls, theaters and other performance venues by as early as 2015.

Without a doubt, Hong Kong has set its heart and financial might to become Asia’s biggest art capital. After New York and London, the financial hub is now the third largest market for art auctions in the world. And the great thing is you don’t have to bid millions to enjoy arts and culture here. From galleries to alleyways, here are just eight accessible hotspots that art lovers can enjoy without breaking the bank.

Art beat on the streets

Surprisingly, the most exciting place to find art in Hong Kong is on the streets. Besides the plein air artists recreating vistas in watercolor and acrylic with Zen-like concentration at parks and promenades, coming across street masterpieces in alleyways and inconspicuous corners is one of the rewards of getting lost in a big city. An “illegal” art form, graffiti art naturally comes and goes. Many of them are sooner or later painted over, like the notable ones at the Oil St waterfront. Nonetheless, keep your eyes peeled for more graffiti art at Time Square in Causeway Bay, Graham St at Central, Granville Rd in Tsim Sha Tsui and the Broadway Cinematheque in Yau Ma Tei, among others. 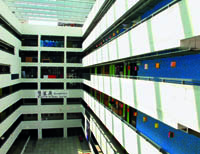 In 2008, a decommissioned factory was transformed into the Jockey Club Creative Arts Centre (JCCAC), an arts and culture hub offering 124 studios for artists and art groups engaged in visual, performing, applied and new media arts. This is the perfect place to preview Hong Kong’s next wave of artists and musicians. While wandering the nine-storey building, Liu Ka Yee’s Miss FAT Studio caught my eye with her bright, whimsical, surrealist work. Like other artists at JCCAC, the 23-year- old fine arts graduate offers regular art workshops open to the public. MTR Shek Kip Mei, www.jccac.org.hk 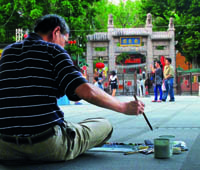 For starters, there are beautiful temples that don’t charge a cent for admission (although small donations are most welcome). For traditional Taoist architecture, take a peaceful respite at Wong Tai Sin Temple, a popular place of worship in northern Kowloon dedicated to the eponymous deity revered for his healing powers.

A painting of Wong Tai Sin housed at the main altar was first brought from Guangdong province in 1915. Amid the brightly painted pagodas and thick pillars sculpted with dragons, you can observe worshippers, divine the future using kau cim (bamboo fortune sticks) and offer up prayers with burning joss sticks. Through a veil of incense smoke, the ornately designed complex interestingly stands in contrast to the surrounding austerity of housing estates. MTR Wong Tai Sin

Learn how to make “lotus fingers” and discover the intricacies of traditional Chinese theater. An age-old fusion of acting, music, martial arts and production design, Cantonese opera delivers visually engaging theatrics rich in symbolism. Every Saturday afternoon, the Hong Kong Tourism Board (HKTB) conducts appreciation classes for tourists free of charge! The hour-long sessions, which include an interesting lecture and a preview of a live performance, are held at the Hong Kong Heritage Museum’s Cantonese Opera Heritage Hall (admission is HK$10/PHP57). MTR Che Kung Temple, discoverhongkong.com

Don’t be deceived by its sterile exterior. The Hong Kong Museum of Art in Kowloon is a treasure trove of over 15,500 items. The museum’s collection highlights antique and contemporary Chinese art, including paintings, calligraphy, sculpture and other antiquities. What’s more, it’s free admission on Wednesdays. After browsing the galleries, take a break at the Museum Café on the harbor view terrace guarded by curious bronze sculptures. On weekends, one can browse art vendors and portrait artists who set up shop outside the museum along the promenade. MTR Tsim Sha Tsui, hk.art.museum 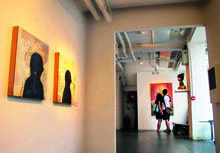 Bisected by the Central Mid-levels Escalators — the longest outdoor covered escalator system in the world — SoHo is Hong Kong Island’s epicenter for shopping and entertainment dotted with numerous art and antiques galleries that rival most museums. An accommodating gallery that exhibits contemporary Asian art is Osage Soho (www.osagegallery.com) along Caine Road. During my visit, the curator showed me around a modest group exhibition of somber, colorful and nightmarish artworks by Filipino artists like Alfredo Aquilizan, Mike Arcega and Louie Cordero. For a comprehensive directory and location map of art galleries, grab a copy of ArtMap (www.artmap.com.hk), a free arts and culture guide available in HKTB Visitor Centres and various establishments. MTR Central.

A manicured landscape in the middle of manic Tsim Sha Tsui, Kowloon Park offers accessible tranquility for visitors and residents alike. Once the site of 19th century military barracks overlooking the harbor, the 13-hectare urban park was redeveloped in 1989 to provide an oasis of recreational facilities, gardens, fountains and walkways to the public. On weekend mornings, take a stroll to Sculpture Walk where the fluid movements of tai chi practitioners wielding fans and swords juxtapose the poetic stillness of bronze sculptures. And every Sunday from 2.30–4.30pm, there’s a Kung Fu Corner where park-goers are entertained with free cultural performances such as martial arts demonstrations, ceremonial drumming and dragon dances. MTR Tsim Sha Tsui, discoverhongkong.com 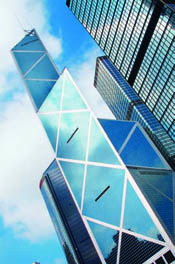 While the Two International Finance Centre dominates the signature skyline of Hong Kong Island like an architectural bully, the Bank of China Tower steals the scene with its origami- like elegance. Completed in 1990, the 72-storey building owes its geometrical beauty to Chinese-American master architect Ieoh Ming Pei, who designed the Louvre Pyramid in Paris. Access to the small observation gallery (Monday–Friday, 8am–6pm) on the 43rd floor is free of charge.

In recent years, street art has emerged. Art galleries like No Borders (www.nobordersart.com) and Forest Bird (www.forestbird.com.hk) provide street artists more permanent (and profitable) venues. Even the government is recognizing their value. The notorious calligraphy of Tsang Tsou Choi (1921–2007), a barely literate worker, is on a pillar of the Tsim Sha Tsui Star Ferry Terminal. And in 2004, Sotheby’s auctioned a board by Tsang for US$7,050! Indeed, art can come from the least likely places.