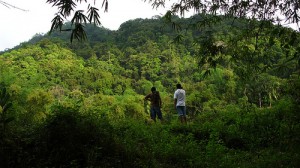 Like a kitchen sponge, Mt. Porras drank up the passing rain as we ascended its flanks to find southern Antique’s famous but uncanny inhabitant. Declared a protected area in 2000, Sibalom Natural Park in Panay Island is a lush watershed that harbors unique species of plants and animals. Despite being rather immobile, our target proved to be highly elusive. Having negotiated rivers and steep forest slopes, we finally found one of the most fascinating plants in the world, Rafflesia speciosa.

Belonging to the genus of the world’s largest single flowers, Rafflesia speciosa was the first of eight species discovered in the past decade by Filipino scientists, a testament to the country’s staggering biodiversity. While only identified by conservationists in 2002, the curious flower has long been familiar to generations of Antiqueños as uroy in the Kinaray-a tongue.

Everything about the Rafflesia is otherworldly. To begin with, they have no leaves, stems or true roots. Being parasites, they attach themselves with absorptive fibers to particular species of Tetrastigma jungle vines, which only thrive in undisturbed, primary forests across Southeast Asia, explaining the rarity of this strange family of fungus-like plants.

Their lengthy and unpredictable blooming cycle makes catching a Rafflesia in all its glory only rarer. Their fleshy, odorous flowers take almost a year to become a spectacle. Slowly breaking through the host vine’s bark as dull cabbage-like buds, most often on the forest floor, they finally erupt into mature blossoms one by one for only a few days. The fiery five-petaled flowers, which can grow to as big as car tires, emit a foul odor to attract flies, beetles and other pollinators. At this point, this “Queen of Parasites” becomes more enigmatic. How Rafflesia seeds disperse themselves and eventually attach to their hosts still remains a mystery to science. 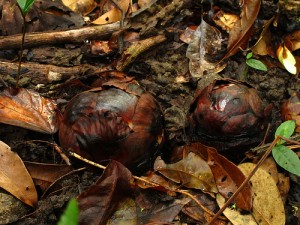 Sadly, like most forests in the country, Sibalom Natural Park is under serious threat. The Philippines has lost more than 80% of its forest cover, and continues to lose more at the rate of two percent every year to logging, mining and agriculture. Park officials however are pushing concrete plans for environmental protection and responsible eco-tourism. “We are drawing up a comprehensive sustainable tourism plan, supporting the volunteer forest guard program and providing alternative livelihoods for local communities,” says municipal environment and natural resources officer Rodel Esler.

Protected areas like the Sibalom Natural Park play a crucial – even desperate – role in saving what’s left of the Philippine rainforest. Aside from the Rafflesia, other endangered species have been recorded. Endemic mammals and birds also call the park their home, such as the Visayan Warty Pig, Visayan Spotted Deer, Panay Bushy-tailed Cloud Rat, Tarictic Hornbill and Walden’s Hornbill. And while alien as they may be, finding these resplendent flowers alive and ablaze are a telltale sign that the fate of Philippine forests and their wild residents can truly still turn for the better. 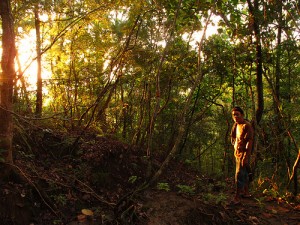 Hiking down Mt. Porras as the sun retires

HOW TO GET THERE: PAL flies to Iloilo from Manila. San Jose, Antique is a 2 ½ hour bus ride (Php90) from Iloilo. A 15-minute jeepney ride (Php13) will take you from San Jose to Sibalom town, where one has to cover the final 30-minute stretch to Brgy. Imparayan – the jump-off point to Sibalom Natural Park – on rental motorbike (Php 300). The Rafflesia site open to tourists is 1-2 hours hike up Mt. Porras from the village.

Entrance fee to the park is Php10 per head. Fees must be paid for cameras brought in the park: Php 25 for still cameras and Php150 for video cameras. Park visitors must be accompanied by accredited tour guides, who can be hired at Php150 a day.

WHEN TO GO: Although Rafflesias flower throughout the year, summer is the best time to visit because the drier weather offers the best conditions for hiking. Rafflesia flowers take 9 to 10 months to mature, with open blossoms lasting only three to five days. Contact the municipal office in advance to check on their blooming: Rodel Esler, municipal environment and natural resources officer – mobile: +63 9063402755; email: lgusibalom@gmail.com

· The Rafflesia was named after British statesman, adventurer and founder of Singapore, Sir Thomas Stamford Raffles.

· In the Philippines, Rafflesias can be found in the islands of Luzon, Panay, Negros, Samar and Mindanao.

· First identified during an expedition up Mt. Apo in 1882, Rafflesia schadenbergiana – the second largest rafflesia species – was later on assumed to be extinct, until it was rediscovered over a century later in the mountains of South Cotabato and Bukidnon.

· Rafflesias have long been familiar to Filipino communities for generations, who have local names for them: uroy to the Antiqueños, bó-o to the Bagobo and kolon busaw to the Higaonon.