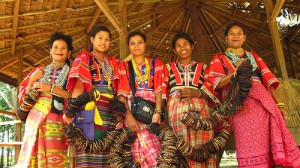 When typhoons lash out across Luzon and Visayas during the rainy season, sunnier weather favors the greater part of Mindanao. Thanks to its geographical location, the massive island offers a great escape not only from antagonistic weather but also, for the intrepid backpacker, from tourist crowds.

Vast and verdant, Davao City – one of the largest cities in the world by land area – offers fascinating spots of its own like the Philippine Eagle Center and Davao Crocodile Park. But the more adventurous nature-lover can choose to go down roads less travelled to experience the region’s hidden bounty of wonders.

While most people troop to the neighboring island city of Samal in Davao del Norte – a mere 10 minutes away by ferry – to indulge in world-class resorts like Pearl Farm, there is another reason to visit that’s worthy of the same global distinction. Check out the Monfort Bat Cave, a large cavern in Brgy. Tambo recently recognized by the Guinness World Records as hosting the largest colony of fruit bats on the planet. A sight to behold, the rather foul-smelling cave is overflowing with at least 1.8 million Geoffroy’s roussette fruit bats – that’s an average of 60 bats per square foot! 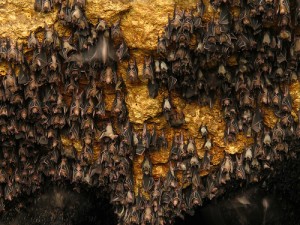 Back on the mainland, there’s more to discover. Heading northeast, buses will shuttle you to the little known province of Compostela Valley, a great place to take it easy amidst natural scenery. Toyozu Hot Springs at Nabunturan is a hot spring resort with Japanese-style baths fed upriver by “the world’s smallest volcano”, which is actually a growing volcanic vent. After a soothing stopover, one can catch a dusty bus ride inland to Maragusan – the ‘Summer Capital of Davao’ – a scenic mountain town with Baguio-like weather amidst banana plantations and waterfalls in the middle of a foggy bowl-shaped forest valley where rare species like rafflesia, the world’s largest flower, can be found. Take in the refreshing countryside views from Haven’s Peak, a mountainside resort overlooking the sleepy village.

Through the cloud forests of Compostela Valley, a jeepney ride can take you directly back down to the coast along Mati, Davao Oriental for a change of scenery. The Pacific Ocean crashes against the golden sands of Dahican Beach to make it a happening surf-and-skim hotspot. From Mati, the ride back to Davao City along the gulf rewards one with dramatic features along the coastline, like the Sleeping Dinosaur peninsula resting on Pujada Bay.

Take a detour south of Davao City for more unique wildlife watching. At Malita, Davao del Sur – three hours from the metro by bus – one can try their luck spotting dugongs in the wild. These shy marine mammals frequently come close to shore to feed on sea grass. While some researchers spend days staking out at a watchtower to see these creatures, I was able to spot three animals, including a cow and her calf, surface a dozen times in a couple of hours despite the rainy weather! Sadly, some locals continue to butcher these meek creatures for meat. Education and law enforcement need to be in place to prevent them from disappearing from Davao’s seas.

The road to discovery may not be always smooth, but the tenacious traveler is always rewarded. Whether its breathtaking mountains, exciting seascapes or fascinating wildlife you’re after, getting off the beaten track in Davao definitely delivers.