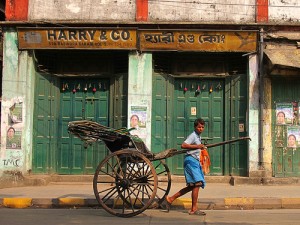 “DISTRESSED? DEPRESSED? SUICIDAL?” a helpline ad at Rabindra Sadan metro station called out to me as I was helplessly swept out by a deluge of commuters onto the steamy streets of central Kolkata. It was well over 35 degrees, and the humidity instantly turned my sweat to soup. None of my senses were spared from the urban onslaught. In a maddening Morse code of blowing horns, the intersection coughed up a dizzying parade of cheddar-hued, vintage Ambassador taxis and shabby rickshaws hand-pulled by scrawny wallahs. “CALL LIFELINE. FREE & CONFIDENTIAL”, the ad assured me.

It was 10:30, and Kolkata, a late riser, had just jolted wide-awake from its stupor. I’d had barely spent a morning wandering around West Bengal’s state capital – the second largest city in India, throbbing with nearly 16 million people – and to say that I was overwhelmed was an utter understatement.

Nonetheless, while stereotypical Kolkata conjures nothing but harrowing images of disorder and destitution, the intrepid traveler will otherwise be rewarded with colorful insights into Bengali culture and heritage that will stand true to its moniker, “The City of Joy”. Even a day’s ramble through traditional enclaves of this former capital of British India will surely astound culture vultures and keen-eyed shutterbugs. 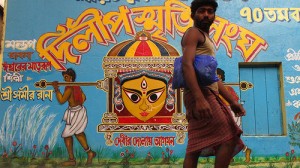 The fascinating starting point of my photo walk was the southern riverside neighborhood of Kalighat, which many believe gave the city its name. According to Hindu legend, the grisly demise of Sati, wife of Shiva, the supreme god of destruction and transformation, created holy places of cosmic power across India, such as the Kali Temple, the centerpiece of Kalighat lodged within its labyrinthine streets. Enraged by Sati’s death brought about by her father’s disapproval of their marriage, Shiva carried her body and began the dance of destruction across the Universe. The other deities intervened and, in the process, severed Sati’s corpse in numerous pieces. Her body parts rained all over the Indian subcontinent forming sacred sites of Hindu worship. Kali Temple marks the site where the toes of her right foot fell.

The temple exteriors are modest but surrounding it were market stalls ablaze with brightly painted icons, garlands of marigold and hibiscus, and other items for puja offerings. Women wrapped in glittering purple, pink and green saris browsed for bargains. Quick-witted vendors lit up with enthusiasm at the sight of my camera. An old vendor, his face smeared red from the kumkum powder he was selling, asked for a portrait, which he scrutinized grinning with a nodding approval. “Handsome man. Best photo!” Another man cajoled the vendor next to him, an elderly woman with a meek smile. “This is Mother Teresa – take photo please!“ Everybody brightened up, laughing. 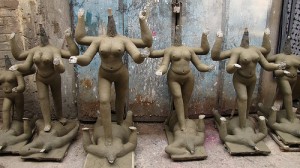 Clay effigies of Kali at Kumartuli

At the northern side of Kolkata is Kumartuli, a quarter renowned for sculptors of giant effigies of Hindu gods. Like Sati’s macabre legend come to life, one can find heads, torsos and limbs of gods and goddesses sculpted from clay and straw lying about the place. As I peered into the dusty workshops, bare-breasted bodies with half-painted faces glared back at me, awaiting their watery fate. Interestingly, the local artisans demonstrate their skills through less traditional, Western-style creations as well. In one corner, Romanesque sculptures of whitewashed figures in delicate drapery were displayed, some of them embellishing Corinthian columns. This district is busiest in October during the annual Hindu festival of Durga Puja – a five-day holiday in West Bengal – where Mother Durga, goddess of victory of good over evil, is worshipped among other deities. The festivities culminate with the ritual immersion of the clay effigies in the Hooghly River, which cut through the twin cities of Kolkata and Howrah. 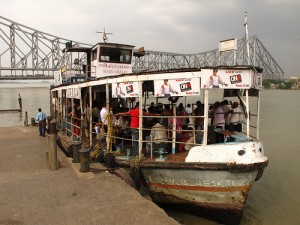 From the Bagbazar jetty at Kumartuli, weathered ferries take passengers down the Hooghly River to Howrah train station. The ferry ride offers leisurely, almost pastoral, views of boatmen fishing from slender, wooden vessels, and wide-eyed children giggling and leaping into the muddy water from the crumbling bathing ghats along the riverbanks. Downriver, the scenery is soon dominated by the majestic feat of engineering that is the Howrah Bridge, completed in 1943. The cantilever bridge, which carries the weight of 80,000 vehicles and over a million pedestrians everyday, is one of the finest of its kind in the world. From the ferry, I observed the constant stream of people marching across its steel webbing, many of them balancing large cloth bundles and bamboo baskets of vegetables and flowers on their heads.

Beneath the bridge, a flurry of crowds and produce sketched a lively scene near the train station. On the sidewalk were piles of fruits and vegetables, a palette bursting with mangoes, cucumbers, eggplants, tomatoes, onions and bitter gourds sold by chatty vendors who weighed them on rusty balance scales. And like their Kalighat counterparts, most of the Howrah vendors were not camera shy at all! 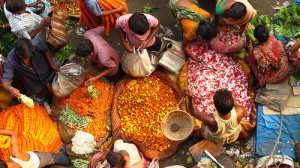 An explosion of color at Mullik Ghat flower market

On the other side, by the eastern bank, is another epicenter of commercial activity, perhaps the most photographed market in all of Kolkata. Best viewed from the Howrah Bridge, the Mullik Ghat flower market is truly a shutterbug’s delight where nearly 2,000 flower growers sell their produce: mostly heaping piles of red and white rose petals, and mounds upon mounds of marigold garlands in the most vivid of yellows and oranges. Selling 6,500 tons of flowers each year, West Bengal is the third largest producer of flowers in India, after Karnataka and Tamil Nadu.

Indeed, Kolkata is a relentless force to be reckoned with even for the most audacious of travelers, an assault to your senses and sensibilities, a hyperbolic juxtaposition of chaos and contemplation, the destitute versus the divine. Like most of India, Kolkata doesn’t always lend its beauty to visitors on a silver platter, because one has to somehow earn it, with open-mindedness, tenacity and a dose of good humor. As a backpacker friend once simply put it, “India takes before it gives.” Rather than absorbing the city as a distant observer, I realized that connecting with the warm, friendly and helpful Kolkatans colored most of my day, resulting to photographs that turned out to be some of the best from my entire trip across North India. 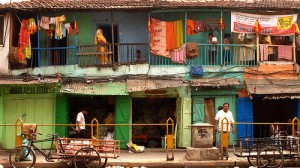 Houses at Kumartuli come in a paintbox of colors

Parting ways with the city was a challenge in its own. Having failed to book a train ticket amidst the pandemonium at Sealdah station, Philip, my travel companion, and I decided to take a bus from the Esplanade terminal instead. We thought we found the best deal after having bought the cheapest tickets available for a non-AC sleeper. Our hearts sank when we finally boarded the bus to find ourselves squeezed into a filthy upper bunk, which was designed for one person, but apparently was meant for two. Looking rather like the handiwork of vandals, the seat numbers were illegibly scribbled on the sides of the berths. We shifted sleeping positions endlessly to find the least uncomfortable configuration, like a hapless pair of Tetris bricks. I stared blankly out the window, dreading the 15-hour journey ahead of us to Siliguri where we had to catch another ride up to our next destination, the former British hill station of Darjeeling perched on the foothills of the Himalaya.

As soon as we left the terminal, the sardine can was stuck in the weeknight traffic jam. And the rain began to pour. I suddenly remembered the metro station ad I saw earlier that day, and the offer regained its appeal. Fortunately, a cheeky bumper sign on a stealthy blue bus swerving through traffic cheered me up, banishing my woes far better, I suppose, than a helpline would. Hand-painted in white all-caps, beneath an artistic flourish of tangerine dolphins, it reminded everyone else to “OBAY THE TRAFICK RULLS.”