George Town & Melaka: Historic Cities of the Straits of Malacca 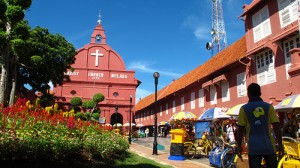 Stadthuys (Red Square), Melaka
If the Philippines has Vigan, Malaysia has the World Heritage cities of George Town and Melaka. Having the opportunity to visit Singapore frequently for business trips has afforded me leisurely side trips to Peninsular Malaysia from time to time. My favorite getaway is Melaka, a former settlement of the British East India Company which still retains much of its colonial, small town charm. It is a city that wakes up the senses: the architectural textures of brick roofing and wooden shutters; the hot and humid sea breeze; the kitschy trishaws blaring American pop music; the aroma of incense and durian; and the sweet and tangy flavors of local fare. My favorites are the Dutch Red Square, Bukit St. Paul, A’ Famosa Gate and, of course, Jonker Walk Night Market. 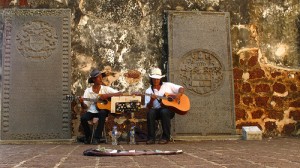 St. Paul’s Church Ruins, Melaka
In 2008, Melaka was declared a UNESCO World Heritage Site together with George Town in Penang Island (further north of the Peninsula) as the Historic Cities of the Straits of Malacca. Last month, I finally got to spend a couple of days in Penang before catching my flight to Kolkata, India from Kuala Lumpur. Like Melaka, George Town is peppered with historical structures but spread out over a much larger area, most notable of which were Fort Cornwallis, Old City Hall, Cheong Fatt Tze Mansion, Kuan Yin Teng Temple and – my personal favorite – the Pinang Peranakan Mansion. 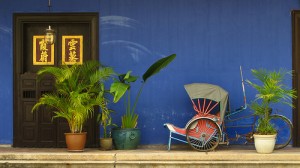 Both cities not only satisfy history buffs, but foodie travelers too. Food stalls and hawker centers whip up eclectic cuisine that’s sure to excite your palate at affordable prices. Don’t miss out digging into Melaka’s chicken rice balls and durian cendol; and Penang’s asam laksa and char kway teow, just to name a few!

Kuan Yin Teng Temple, George Town
HOW TO GET HERE: Georgetown (Penang Island) and Melaka are serviced by frequent buses from Singapore and Kuala Lumpur.
For George Town, it is more convenient to take a bus to Butterworth (on Peninsular Malaysia), then hop on a ferry to the heart of the city, rather than a direct bus which takes you across Penang Bridge to terminals away from the city center.
For Singapore to Butterworth/Penang, it’s much cheaper to cross the border to Johor Bahru then catch a bus from Larkin bus terminal, rather than taking a direct service from Singapore.

One Reply to “George Town & Melaka: Historic Cities of the Straits of Malacca”