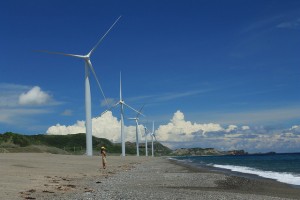 The giant windmills of Bangui

Known for their impressive coastal tourist spots, the neighboring municipalities of Bangui and Burgos were my next stops after Pagudpud.

First up: Bangui Windmills. To my surprise, these much-photographed structures were far larger than I imagined! Out of place amidst bucolic surroundings, the white sentinels – all 19 of them in a single row – loomed 23 stories high above a sandy beach and verdant pastures along Ilocos Norte’s northern end. Since their inauguration in 2005, the handsome behemoths have been the poster boys of the region’s sustainable development and robust tourism.

The NorthWind Bangui Bay Project, as its officially called, is the first “wind farm” in the Philippines, providing 40% of Ilocos Norte’s power requirements. North Luzon falls along the Asia-Pacific monsoon belt, making it an ideal location for turbines to harvest wind energy. 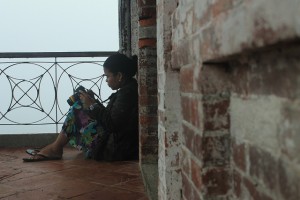 Taking shelter from a storm at Cape Bojeador Lighthouse in Burgos

Another man-made but much older structure in Burgos attracts tourists like moths to a flame: the Cape Bojeador Lighthouse. Standing upon a hill, the Spanish-period edifice established in 1892 is an ideal centerpiece to a picturesque landscape. Unfortunately, by the time travel blogger Gael of The Pinay Solo Backpacker and I reached this beautiful place, an incoming tropical storm launched strong winds and heavy rain that drove away the sun. Nonetheless, the rundown octagonal tower suitably became a rustic but somewhat spooky temporary shelter from the bad weather. 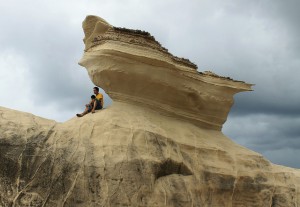 The otherworldly rock formations of Kapurpurawan in Burgos

A short ride from the lighthouse, Nature herself has built a unique landscape worthy of the same admiration for these man-made attractions. Sculpted by wind and sea into otherworldly shapes and textures, the Kapurpurawan Rock Formation is a topographical wonder to explore on foot. Herds of tourists clamber up its jagged and undulating surfaces for creative poses against the striated head that precariously tops the formation. Its Ilocano name means “white” referring to the soft sandstone, which makes the seascape look like a desert. A tricycle driver compared Kapurpurawan to Dubai, while an Indonesian friend who saw my photographs likened it to the deserts of Utah.

If there’s one thing that draws people to Ilocos Norte’s coastal wonders, it’s that intriguing quality that transports them to another time and place. 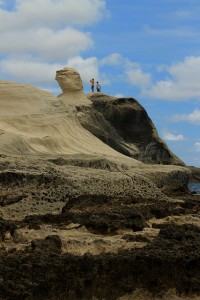 HOW TO GET THERE: The coastal resort town of Pagudpud is the ideal base to explore Ilocos Norte’s northern coast. From here, tricycles offer southbound tours (PHP 600, 2 to 3 pax), which includes all the spots mentioned in this post. They also offer northbound tours which includes Blue Lagoon and the Patapat Viaduct. See my previous post for more details.