The five-storey belfry of coral stone afforded a pastoral panorama beyond the town plaza occasionally punctuated by jeepneys and tricycles whirring along the highway that stretched back to Roxas City.

I was in the town of Pan-ay in Capiz to behold a superlative antique. Considered the largest Christian church bell in Asia, Dakong Lingganay (or Big Bell) was smelted from 70 sacks of coins donated by the townspeople in 1878. True to its humbling inscription, the “Voice of God” can be heard up to eight kilometers away when it rings for Sunday mass and special occasions. (And, yes, you wouldn’t want to be sitting underneath it when it does.) 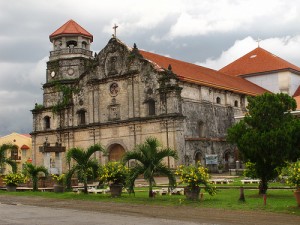 Established in 1698, the baroque Church of St. Monica itself and the adjacent parish convent are equally impressive as its renowned bell. Blended with neo-classical elements, the façade is defined by Corinthian piers and adorned with well-preserved statues of saints. And the entire structure is supported by stonewalls three-meter thick and beautifully roofed over with terracotta tiles. A grandiose survivor of the 19th century Philippine Revolution when the town was razed to the ground, the church proudly stands today as an imposing centerpiece to Pan-ay’s historical significance. 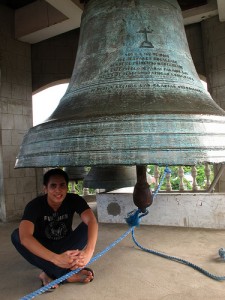 Dakong Lingganay (Big Bell) – the largest of its kind in Asia

Christened the “Heritage Capital of Capiz”, Pan-ay lays claim to being one the country’s oldest Spanish settlements, and the site of Panay Island’s first evangelization. In 1566, Augustinian missionary Fr. Martin de Rada preached on the riverbanks of Bamban (the old name of Pan-ay). Three years later, conquistador Miguel Lopez de Legaspi left Cebu for lack of food and set camp in the area, making the town his temporary administrative capital. 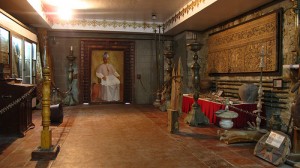 While no other colonial edifices have survived through time in Pan-ay, one can appreciate historical and religious vestiges from the Spanish period at the Museo de Santa Monica within the beautifully restored convent. Golden vestments, silver retablos, brass fixtures and santos of ivory and wood are some of the precious artifacts found in the modest but well-kept museum curated by the friendly parish priest. Outside, a less precarious replica of the Big Bell sits on the lawn for less adventurous visitors to admire.

HOW TO GET THERE: Located 8 km southeast of Roxas City, Pan-ay is 15 minutes away by jeepney or tricycle.

4 Replies to “Pan-ay, Capiz – Where the Big Bell Tolls”