“A tourist sees a place, while on the other hand a traveler seeks,” a friend of mine recently posted on Facebook. True enough, more than visiting popular spots, what excites me more about travel is discovering off-the-beaten track sort of places. 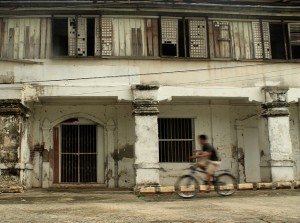 Colonial edifices, like this one in Tayum, are some of the architectural heritage of Abra

During a trip along Ilocos region’s northern coast, fellow travel blogger Gael of The Pinay Solo Backpacker and I detoured southward to avoid an imminent tropical storm and spontaneously discovered a province off the tourist maps – Abra. Largely ignored by North Luzon’s tourist circuit, this landlocked province in the Cordillera Administrative Region (CAR) makes a perfect destination for travelers who want to blaze the trail for new travel discoveries.

After having a quick breakfast at a local bakery in the provincial capital of Bangued, we started our exploration by walking up to Victoria Park. Perched on Cassamata Hill, the park offered a refreshing environment for morning joggers and commanding views of the town embraced by mountains. Back down at the town’s center, the Bangued Cathedral has been restored. And the town church in the neighboring municipality of Tayum is also well preserved. 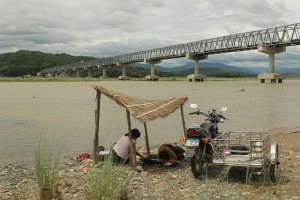 However, only a few ancestral homes have enjoyed a similar fate. Most have been reduced to dilapidated walls, or at worst mere mounds of reddish rubble. Fortunately, a few of them have been converted to carinderias (eateries) serving the town’s specialty, miki noodle soup. In contrast to the common bahay na bato (stone house), the Spanish –period ancestral homes in Bangued were built primarily with red bricks instead of chalky-white coral stone. Sadly, most of these structures were badly damaged during WW-II, and whatever has survived the war are now abandoned and left to disintegrate with the elements. 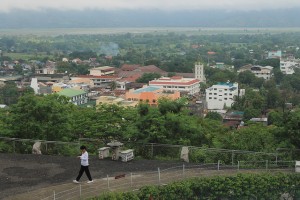 More than its architectural heritage, Abra takes pride in its traditional handicrafts. “Most of the souvenirs and products sold to tourists in Vigan are made in Abra,” local entrepreneur Yvonne Casia proudly revealed. A doctor by profession, Ms. Casia has now invested all her time on her bamboo craft business. We discovered her workshop, which showcased creative bamboo furniture and other home accessories while walking around the town. 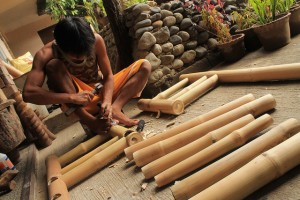 A popular cottage industry in Abra is bamboo craft.

The accommodating businesswoman also referred us to another local venture that preserves one of the province’s fading traditions. Located in a rural village outside the poblacion, Leila’s Loomweaving in Brgy. Bulbulala, La Paz produces traditional textiles and textile products such as blankets, polo shirts, scarfs, pillowcases, table runners and placemats, all painstakingly manufactured with century-old handlooms. “Even Tingguian tribes people who have lost the art of weaving come down from the mountains to buy cloth from us,” said business owner Ms. Natividad Quiday, whose family has been in the handloom weaving business for at least four generations.

Both heritage and tradition contribute significantly to Abra’s tourism potential. As an adventurous side trip from the perennial favorites of Laoag or Vigan, it offers an unexpected array of sights and experiences: baroque churches, ancestral brick houses, traditional handicrafts like bamboo crafts and loom weaving, set amidst expansive mountain valley sceneries. Beyond the sights, what piqued my interest more were the hospitality, industriousness and perseverance of the locals we serendipitously met during our day visit, which will definitely not be our last as there’s definitely much more to discover in the province. 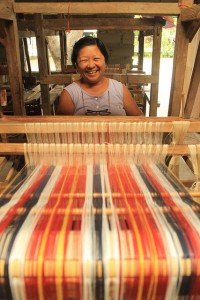 To get to Leila’s Loomweaving, ride the jeepney to La Paz from the market, and tell the driver to drop you off the turn-off to Brgy. Bubulala. From the highway, hire a tricycle to take you to and from the workshop (PHP 150-200, 2 pax).