Last weekend, Davao City welcomed its visitors at the airport with free drinks called ‘Davao Punch’ – a trademark concoction of guava, pomelo and calamansi created exclusively for the festivity. It was a great taste of things to come for the yearly spectacle that is Kadayawan, and a thoughtful prelude to the warm hospitality of the Dabawenyos that continued throughout the wonderful festival weekend. 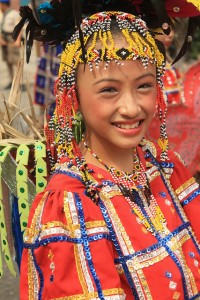 Every August, the Kadayawan sa Dabaw festival colors the streets of Davao City in southern Philippines with the revelry of street dancing, float parades, pageants and events showcasing the cultural diversity and natural bounty of the region. Unlike most Philippine festivals which are religious in nature, the Kadayawan – rooted in the friendly Mandaya greeting, madayaw – is foremost a cultural affair for all, where Christians, Muslims and various tribal groups unify in thanksgiving for bountiful harvests, peace and prosperity, as well as to celebrate the beauty of the region’s natural resources. The ten ethnic groups of Davao are Ata Manobo, Ubo Manobo, K’ lata, Tagabawa, Matigsalog, Maranao, Maguindanao, Tausug, Sama and Kalagan. 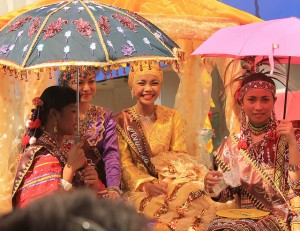 The festivities climax on the third weekend when colorful street parades are held downtown. On Saturday, the Indak-Indak sa Kadalanan features street dancers in various traditional costumes, while the Pamulak Kadayawan on Sunday showcases parade floats decorated with flowers, fruits, vegetables and other produce. Prominent icons of the festival are the durian, the spiky and pungent ‘king of fruits’, and the endangered Philippine Eagle, endemic to the Philippines, especially in the primary forests of Mindanao. 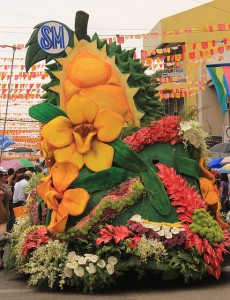 HOW TO GET THERE: Most local airlines like Cebu Pacific Air and Airphil Express fly to Davao from major cities in the country. If the PHP 200 to 300 taxi cab is too steep for you, the city center can be reached by two jeepney rides for only PHP 23 total. Ask locals for directions.

WHERE TO STAY: We stayed at Casa Graciana Inn (Tel. +63 82 2977836) at Juna Avenue across NCCC Mall. AC double room at PHP 600. It’s located at a quiet residential area but still accessible to the city center since it’s just off a major thoroughfare. Matina Town Square, a popular nightspot, is just walking distance. Downtown is a short jeepney ride (PHP 8) from the main road, MacArthur Highway.

WHAT TO EAT: A trip to Davao wouldn’t be complete without sampling its iconic ‘king of fruits’, the durian. Fruits stalls dedicated to this spiky fruit with pungent, creamy flesh can be found downtown, especially at Magsaysay Park where, during our visit, they cost PHP 100 per kilo.