Bangkok is an urbanite’s dream. But when one needs to tune out from the backpacker abandon of Khao San, or the manic consumerism of Chatuchak or even the irresistibly neon fantasies of Patpong, there’s an “island” oasis upriver where, surprisingly, rural life still rolls by at a relaxing pace. 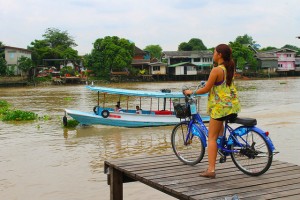 To start with, Ko Kret (Koh Kred), the island I’m taking about wasn’t an island until the late 17th century when a canal was built to bypass a sharp bend along the Chao Phraya River thereby isolating a squarish piece of land from the rest of Nonthaburi, only 17 km north of central Bangkok. And, fortunately, rescuing it from three centuries worth of urbanization thereafter.

For the past 200 years, this riverine island has become an enclave of the Mon people who once dominated central Thailand during the 6th to 10th centuries. This ethnic group was responsible for the spread of Theravada Buddhism in Thailand and Burma, and also for their pottery making, a tradition kept alive in Ko Kret. The kwan aman style of Mon pottery popular on the island is characterized by baked unglazed clay with intricate patterns. 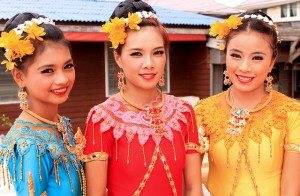 Similar to Singapore’s last kampung (traditional village), the mangrove island of Pulau Ubin, one of the most enjoyable ways to explore Ko Kret is by bicycle, which can be rented out for only THB 40 per day! My travel companions and I had a pleasurable time looping around the island at a leisurely pace following narrow concrete pathways and bridges. We passed by Buddhist temples, whitewashed chedis, stilted teak houses and, of course, the renowned pottery villages where the Mon handicraft has been preserved for centuries. By the roadside, villagers busily chopped firewood and fed their chickens, while not forgetting to exchange friendly nods, smiles and sawasdees with visitors. Since there are no cars on the island, only the occasional purr of passing motorbikes punctuates the bucolic atmosphere. 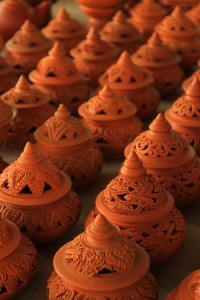 More surprises are in store at the local markets selling souvenirs and local treats. While we had the usual favorites of deliciously spicy pad thai, satay and Thai tea consumed enthusiastically by riverside eateries, we also sampled some of the stranger fare like deep-fried orchid and santan (ixora) flowers!

For its size, Ko Kret has quite a handful for the jaded city slicker to discover. So the next time you’re in Bangkok and, for whatever reason, the city starts to get to you, remember there’s an island getaway just a stone’s throw away. 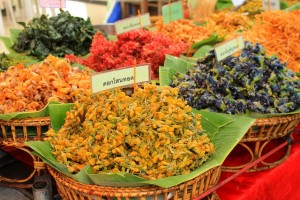 HOW TO GET THERE: From central Bangkok, one can ride the river ferry north along the Chao Phraya River to Nonthaburi pier (THB 12), where you can bargain for a long-tail boat further upriver to Ko Kret. We were able to hire one for a return trip for THB 1,000 (3 persons) with 4-hours waiting time.