Before world boxing champ Manny Pacquiao or Ms. Universe beauty Shamcey Supsup, the southernmost city of General Santos in South Cotabato – “GenSan” for short –has long been known for another world-class export – tuna! Since the international market discovered the abundance of tuna off its coast in the early 1970s, GenSan has been dubbed the “Tuna Capital of the Philippines”. 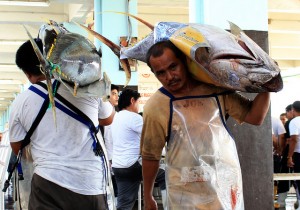 The best place to appreciate the tuna industry is at the Fishport Complex in Brgy. Tambler, a 11-hectare compound considered to be the most advanced facility of its kind in the Philippines, the 7th largest tuna-producing country in the world. Commercial fishing vessels dock before dawn to unload tons of humungous deep-sea fish mostly caught in Sarangani Bay and the Celebes Sea. An average of 13 metric tons of fish are hauled, weighed, processed and sold at this port everyday, with more than a third of the catch being Class A or “sashimi grade” adult tuna, which can fetch up to PHP 350 per kilo on wholesale. A fourth of the tuna are shipped directly to Japan and US markets. 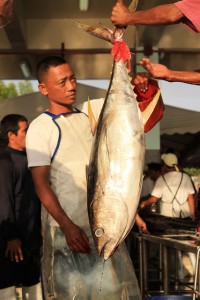 As you walk around the market zone, one can watch how laborers carry the huge 35 to 50 kilo fish on their shoulders to be weighed, washed and cleaned. Wholesale buyers poke the tuna with metal rods to determine the quality of the meat. Other fish are sent to factories to be processed and canned. Nothing goes to waste. Even tuna gills and internal organs are brought home by fishermen for cooking, or processed into animal feeds. 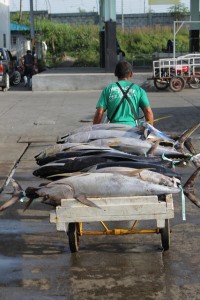 Wheeling away tuna for washing

HOW TO GET THERE: General Santos is accessible by air from Manila and Cebu. From Davao, it’s only a three-hour ride (Non-AC Yellow Bus Line, PHP 199), with buses leaving as early as 1:30 AM from the Ecoland terminal. From GenSan’s city center, hop on a motorbike to the Fishport Complex (PHP 50) at Brgy. Tambler.

At the Fishport, dress code applies: no sleeveless shirts, shorts or slippers. Valid ID must be presented at the guardhouse, where they will give you a Port Entry Monitoring Slip to be presented at the Administration Office. Upon approval of your visit, you will have to wear the rubber boots provided to enter the market zone. A security guard will accompany you as you tour the area.

2 Replies to “Getting Fishy in Gensan”