During my much-anticipated visit to Lake Sebu in South Cotabato, I had the opportunity to experience spending a night in an indigenous home. The T’boli are one of the numerous non-Islamic indigenous peoples – or lumads – in Mindanao. They once occupied a majority of the island, but due to the arrival of Christian migrants from Luzon and Visayas in the early 20th century, as well as sporadic ethno-political conflicts, they have been pushed to highland areas such as the municipality of Lake Sebu. Modernization and evangelization have changed the way of life of many of these ethnic groups, with their heritage and traditions quickly fading away. 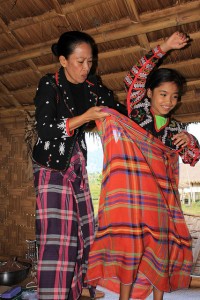 My T’boli host Maria dressing up her daughter.

Like my trip to Kalinga last year, homestays are the best way to experience local cultures and directly help their communities. Rather than staying at the touristy lakeside resorts, an enriching way to experience Lake Sebu is by staying with a T’boli family. Oyog “Maria” Todi Arroz is a T’boli cultural worker who occasionally hosts travelers at her tribal hut in Brgy. Lambanig. Her traditional house is located beside a T’boli primary school that runs through an NGO she also founded, the Schools for Indigenous Knowledge and Traditions (SIKAT). Since 1994, Maria has established non-profit organizations that promote T’boli arts and culture through the Helubong Cultural Dance Troupe, and uplift the education and livelihood of indigenous peoples through the Kesetifun Cultural Care Foundation. 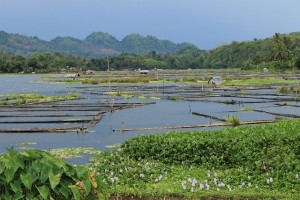 The spacious tribal hut was first built as a performance space for the dance troupe, but later on become a guesthouse for visiting researchers and documentarists. Built on a hill overlooking the placid lake, Maria’s longhouse is built with nipa palm, bamboo and hardwood. Inside, the rectangular floor plan is composed of a central living area called lowo, surrounded by elevated sleeping areas called blaba, where during day Maria and her friends sit by the large windows, making traditional beadwork jewelry to sell as souvenirs. 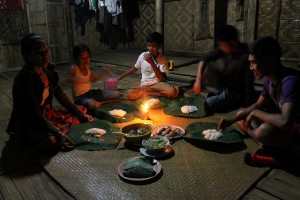 Dinner was the most memorable part of my stay. Maria served a traditional feast on large woven bamboo mat: stewed tilapia – Lake Sebu’s primary produce, eggplant salad and keteng (freshwater clam) soup. Warm rice was wrapped in large leaves called duon lmenge, which we used as plates. Together with her children and nephews, we enjoyed our meal at the lowo, lit by an oil lamp made from a tin can, as Maria shared stories about her life and her efforts to preserve and share T’boli heritage and traditions. Her strength and determination to overcome the personal challenges she faced and her selfless commitment to preserving her people’s heritage and culture are truly inspiring. 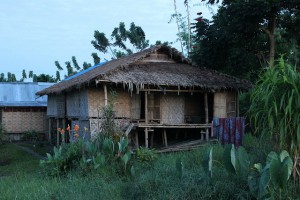 WHERE TO STAY: Maria’s homestay is located at Brgy. Lambanig, Lake Sebu, Cotabato. When you take a jeepney or motorbike from Surallah, tell the driver to drop you off near the SIKAT-T’boli school. Bring a sleeping bag as it gets very cold at night. Maria does not specify a rate for her homestay. PHP 200 per night would be a fair rate (excluding meals). I encourage visitors to donate more for the upkeep of the house, and to support her NGOs. Contact Maria Todi at +639066345367.

5 Replies to “Lake Sebu: Living with the T’boli”