After a three-day fieldwork in Tawi-Tawi for a travel story, I spent two days in Zamboanga on the way back to Manila late last August. Having relatives in Zamboanga, I have visited the city twice before and have seen the most important landmarks in the so-called “Latin City of Asia”, a moniker referring to the strong Hispanic influence in the city, evidenced by the Spanish-based Creole primarily spoken by the Christian population called Chavacano.

As it was the last few days of Ramadan during my visit, I chose to experience a different aspect of Zamboangueño culture this time around, particularly in the “rough end” of the city called Rio Hondo, a stilted Muslim village once built along a “deep river” (which gave the settlement its name) and a place that I’ve been keen on exploring for years, but have always been warned never to visit. 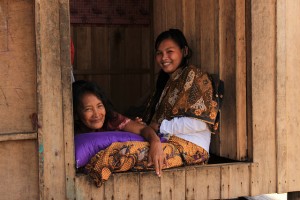 Located some 200 meters south of the city’s iconic Spanish edifice of Fort Pilar, this neighborhood suffers the prejudiced reputation, especially among the Christian population, as being a perilous place for outsiders, a notion that’s difficult to completely eradicate due to decades of ethno-political conflict between indigenous Muslim peoples and Christian migrants from Luzon and Visayas. “Many Zamboangueños haven’t been to Rio Hondo because they fear the place,” Gammar Hassan, a former barangay official says.

While violent gunfights and smuggling were commonplace up until the 1980s, Rio Hondo is now a much more peaceful place where, more recently, a minority of Christian Visayans have settled as well. Gammar and a few volunteers from the village have informally become non-profit tour guides with the objective of enlightening visitors with an untainted perspective on Rio Hondo, and sharing the culture and daily life of the locals. 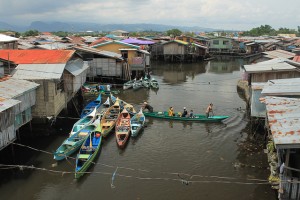 Even though he was fasting that day, Gammar took the time to show me around Rio Hondo under the midday heat. Sadly, while the thatched roofs have long been replaced by galvanized iron and the boats now powered by motors instead of colorful vinta sails, Rio Hondo still offers a insightful glimpse of the sea-oriented Moro people of Western Mindanao, namely the Tausug and Sama-Badjao (or more popularly known as “sea gypsies”). My visit was a pleasant experience. I was greeted by friendly nods, generous smiles and the occasional jeer of enthusiasm by some to have their photograph taken. The only anxiety I experienced was from negotiating dilapidated catwalks and narrow wooden planks no wider than my shoes as I shot various angles of the stilted houses and their residents, many of them amused by my shaky inexperience. 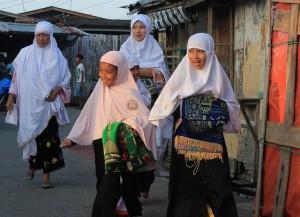 Muslim villagers head to the community mosque with their prayer rugs

Early the next morning, Gammar led me to a small mosque, where the community gathered for morning prayers celebrating Eid’l Fitr, the end of Ramadan. Men wearing their taqiyah caps and women in their white hijab veils brought their colorful prayer rugs. It was a beautiful experience, as the golden sunlight slowly surrounded the mosque and the devotees. “It’s true that Rio Hondo is a place of no return…” Gammar jokingly warned as we later parted ways, “you will have a hard time leaving our village, when you’ve instantly fallen in love with the genuine hospitality of the people here.” I could not agree more.

HOW TO GET THERE: One can reach Zamboanga by air from Manila and Cebu. Rio Hondo is accessible by tricycle (15 minutes, PHP 40) from the city center. Navigating around the labyrinthine village across elevated planks and narrow catwalks (many of them dilapidated) is tricky, so asking for local guidance is essential not only for security, but for practical reasons as well. Look for former barangay official Gammar Hassan at +63 9064571563.

WHERE TO STAY: I stayed at Casa Don Atilano Pension where basic non-AC single rooms start at PHP 350. Atilano Compound, Mayor Jaldon St. Tel +63 62 9901962. It’s a short jeepney ride away from the airport.

4 Replies to “Ramadan in Rio Hondo”