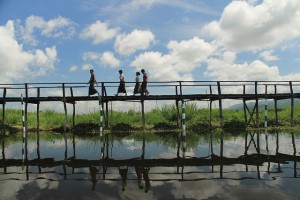 Mrs. Soe, the motherly owner of Queen Inn, sent us off on a day tour – as with most Burmese we encountered in our journey – with the warmest congeniality matched with a familial smile at the wooden dock next to the guesthouse along the river canal that led away from the township of Nyaung Shwe. My friends and I were on a week-long backpacking trip, racing around Myanmar’s so-called “Big Four”: the tourist hotspots of Yangon, Bagan, Mandalay and – our last leg – the watery world of Inle Lake, located 880 meters above sea level at one of the few areas in the insurgent Shan State open to tourists. 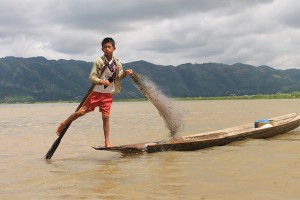 Leg-rowing “sons of the lake” – the Intha people

Past the busy village stirring up in the morning with men loading goods and produce onto canoes, the motorized longboat slid through a field of water hyacinths, which soon yielded to a large inland body of water – stretching 22 km long and 10 km at its widest, to be more precise – a lake vast enough that one could have easily mistaken it for the ocean. At that moment, the black-and-white photograph on the book cover of my copy of George Orwell’s Burmese Days sprung to life. Not far away, I could make out silhouettes of the lake’s famous Intha fishermen who row with their paddles using one leg, while keeping the other planted at one end of their small, slender wooden canoes. A unique rowing style practiced only by Intha men, this gravity-defying yet graceful stance keeps both their hands free to cast their fishing nets over the water while they deftly maneuver the boat and hit the water’s surface to scare fish into their traps. 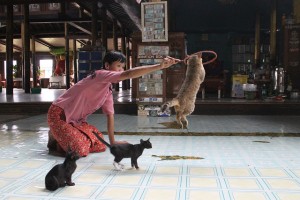 Also known as “sons of the lake”, the Intha people are a Tibeto-Burman ethnic group who have adapted skillfully to living in the lake region. Numbering at around 70,000, they are the ethnic majority, building simple stilted houses from hardwood and bamboo. More fascinatingly, they are masters of hydroponic farming, tending to scenic floating gardens of tomato, gourd and other vegetables grown on large patches of compost and water hyacinth anchored to the lakebed by bamboo poles. 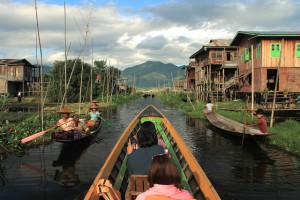 Cruising through the floating village of Ywama

While there are over a hundred Buddhist monasteries and shrines in and around the lake, a particular one, which was our first stop for the tour, draws the most visitors with charming stunts. Challenging the leg-rowers as the acrobatic stars of Inle Lake are the furry tenants of Nga Phe Kyaung, a stilted teak Buddhist structure more popularly known as the “Jumping Cat Monastery”. The resident monks and caretakers have taught their feline pets – with gentle coaxing and some “cat whispering” – to obediently jump through looped arms and wire hoops. Donations of any amount from entertained tourists help in the upkeep of the monastery and their little performers. 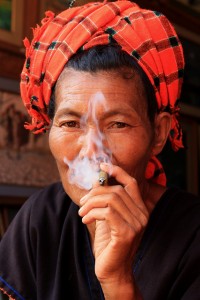 From Nga Phe Kyaung, we traversed further down the elongated lake to Ywama, a floating village with workshops selling hand-woven textiles, silver jewelry, woodwork and other indigenous handicrafts. Other women villagers peddle their goods in small canoes alongside our motorboat. In one workshop, we come across three young weavers from another ethnic group, the Kayan Lahwi. The female members of this tribal group wear stacks of body-altering brass neck coils primarily as an expression of aesthetic preference and cultural identity. Although originally from the neighboring Kayah State, many tribes people have sought refuge in more peaceful areas in Myanmar to as far away as northern Thailand due to decades of ethno-political conflict.


Looking forward to a change of scenery, I asked our Intha boatman, “Where are we going next? To Indein?” He replied with nothing more than a nod paired with a betel-stained smile, apparently having no command of English whatsoever. Our boat swiftly detoured into a stream that shrank into a creek leading to the village of Indein, where we encountered yet another ethnic group, the Pa-O tribe, loading a motorboat with their harvest of vegetables. Tied to the creation story that their people were born from a dragon mother, Pa-O women are distinguished by their red-and-orange turbans fashioned like a dragon’s head. 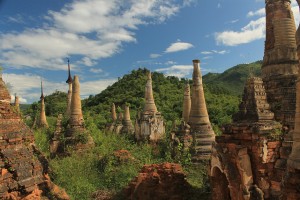 Historical edifices are the main draw of Indein, however, where an ancient 700-meter long pillared walkway lined with souvenir stalls guides visitors to the Shwe Inn Dein pagoda complex. Crowding around the main pagoda are hundreds of centuries-old brick stupas in various states of disrepair and restoration, some of them burning bright with fresh coats of white and gold paint, while many of them crumbling down the verdurous hillside like a dilapidated giant chess set. What the Indein ruins lacks in vastness compared to the world-famous temples of Bagan, it makes up uniquely with its clustered, decrepit character.
Hiring a motorboat for a day is the only way to reach most of the lake attractions, but an independent, non-touristy option to explore the lake and its surrounding villages is on two wheels. On our second day, some of us decided to rent bicycles from our guesthouse for a morning spin around the lakeside communities of Kaung Daing and Maing Thauk. On the western lakeshore south of Nyaung Shwe, we pedaled to the village of Kaung Daing. Wandering around on foot, it was fascinating to watch villagers prepare and cook various snack delicacies like rice cakes, peanuts and salted popped beans, which the hospitable residents invited us to sample. 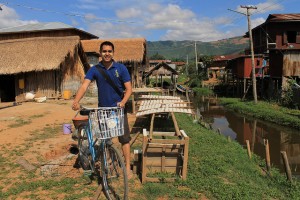 Biking around the lake – stopover at Kaung Daing Village

To cross the lake, we hired a motorboat to carry our bikes and us to the village of Maing Thauk on the other side, where we docked at a long wooden footbridge that reminded us of U Bein, its more popular counterpart, the longest teak bridge in the world located in Amarapura, Mandalay Division. Biking back to Nyaung Shwe, we stopped by to admire the beautiful pagoda architecture of the former Royal Shan Palace, which has been converted into an uninteresting Buddha Museum by the military regime to suppress Shan nationalism.
Whether by boat or bicycle, Inle Lake is the ideal setting to immerse oneself in the cultural diversity, rich traditions and natural beauty of Myanmar as it brings together tribal peoples, unique village life and rustic religious sites set in the majestic topography of a “sea” wedged between the cool-weathered midlands of Myanmar’s mysterious north. At the end of our boat tour, we were moored at the center of the lake, watching the sun retreat behind the forbidden Shan hills. And, at that magical hour, the horizon disappeared, the lake bathed in omnipresent light coalescing with heaven and earth, just as man, myth and nature have for centuries in this awe-inspiring aquatic Shangri-la.


For more information on backpacking around Myanmar (Burma), please check out my previous post.