Tawi-Tawi: Pearl of the South

The following is a commissioned article I wrote for this month’s issue (October 2011) of SMILE, the in-flight magazine of Cebu Pacific Air. You may browse the magazine online at http://www.cebusmile.com

My prayers on Bud Bongao — the sacred peak that juts out beyond Tawi-Tawi’s provincial capital skyline — were answered. On my last day, the weather ripened to give me my only opportunity to venture further south to the final frontier of Sitangkai. With the blessings of Juana Sahali — the governor’s wife and provincial tourism council chairwoman — who graciously hosted my visit, our speedboat ripped across the white-capped currents, sea spray seasoning the smiles on our sun- toasted faces. 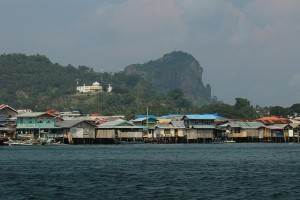 Like the lonesome sailfin of some undersea leviathan, Bud Bongao’s limestone karsts shrank to a blue grey silhouette in the endless ocean. The day before, we ascended its summit with bananas in hand to bribe the simian mafia for a hassle-free passage. While mostly a seascape of stilted houses, mushroom islets, coral reefs and sandbars, Tawi-Tawi’s smattering of formations inland are equally impressive, especially on the main islands of Bongao and Sanga-Sanga where rocky outcrops punctuate the skyline, hosting populations of wild animals such as tropical birds, fruit bats and monkeys. 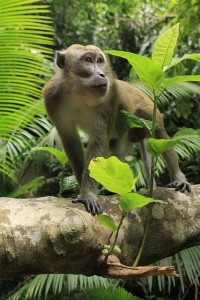 One of Bud Bongao’s mischievous residents

“Conquering Bongao Peak is a place that grants you unforgettable encounters with its resident long-tailed macaques in the heart of several tampats (sacred places in Islam) in the forest,” says travel photographer Ferdz Decena, who has visited the province twice out of sheer curiosity. During my climb, a Tausug mother joined us, carrying her infant son to the peak so as to win him good health. Aside from the expansive views at the top, Bud Bongao offers a cultural glimpse at the customs of the Muslim Tawi-Tawians, who scale the peak to offer prayers with the guidance of an imam (priest) at the shrouded royal tombs. 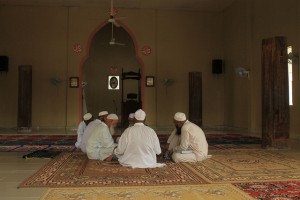 Pakistani pilgrims at Sheik Makhdum Mosque, oldest in the country built in 1380.

True to its name rooted in the Indo-Malay word “jaui,” meaning “far away,” the archipelagic province of 307 islands is most suited for those seeking an adventure, worlds away from the mainstream tourism circuit. More than its geographical isolation, the ethno-political insurgency marring the rest of the Sulu Archipelago also prevents the influx of tourists enjoyed by the country’s more popular frontiers like Palawan and Batanes. Even the mere mention of visiting Tawi-Tawi is always met by anxious reactions. By monitoring current affairs and seeking the guidance of locals, you can make visiting this untapped corner of the archipelago a safe and enriching experience. The province’s rich combination of Malay-Islamic heritage, sea-oriented cultures and incredible natural vistas, at high and low tides, make it a unique tourist destination that is unmatched by any other spot in the country. 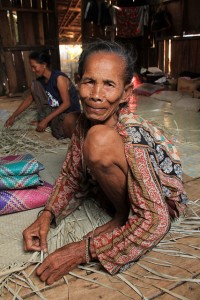 While the province is comprised of mostly Sama-Badjao people, succeeding settlers such as the Tausug from Sulu, Christian migrants from the rest of the country, as well as Chinese merchants from Sabah, Malaysia have continued to shape a vibrant and harmonious society. “Surprisingly, people respect each other here despite the difference in religion,” adds Decena. “At first I thought Tawi-Tawi was a purely Muslim area, but different religions coexist peacefully here.” Joining him for bukah — the daily sunset meal that breaks the fast during Ramadan — at his stately home in Bongao, Governor Hadji Sadikul Sahali shared the insights he has gleaned from leading this province for a total of 10 years since 1998. “Peace is made possible in Tawi-Tawi, not because of arms or authority,” he reveals, “but because we all choose to live in harmony, whatever our creed or culture.”

Remnants of an ancient land bridge, this island chain now swathed in swift currents, has served as stepping stones of civilization for a millennia. In fact, archaeological excavations at the Bolobok Rock Shelter in Sanga-Sanga Island yielded Neolithic tools made of stone, shell and animal bone, which peg Tawi-Tawi’s prehistory to more than 9,000 years ago, when the first inhabitants arrived. Later on, the Sama majority — including their “sea-gypsy” cousins, the Sama Dilaut or Badjao — arrived in Tawi-Tawi more than 1,000 years ago, tracing their ancestries to as far away as Johor, Malaysia. According to Sama-Badjao folklore, they reached the Philippine islands when a chieftain secured the boathouses of his villagers to a mooring pole and, upon sticking it to the seabed, accidentally poked the eye of a sleeping giant stingray, which awoke and swam away, towing their boathouses along with it. 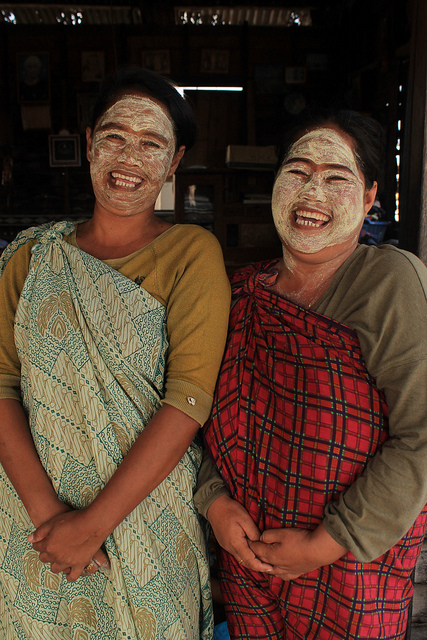 Badjao women wearing herbal facial whitener called ‘borak’
Under the protection of the Srivijayan Empire based in Sumatra, Arab traders eventually reached Philippine shores by the 12th century, trading linen, wool, metalwork and bullion with Chinese silk, porcelain, camphor and spices. Arab missionaries led by Sheik Karimul Makhdum who established the first mosque in the country at Tubig Indangan, Simunul Island in 1380, introduced the Islam faith to the people more than 140 years before the advent of Ferdinand Magellan and the Spanish colonization. A mystic sufisaid to have been endowed with magical powers, Sheik Makhdum could walk on water and fly through the air. He was extremely tall as well. Behind the mosque, a sandy grave mound said to cover the actual length of his body measures more than 8ft long. Others believe Makhdum was buried in Sibutu Island, where another tomb of the pioneering missionary can be found. 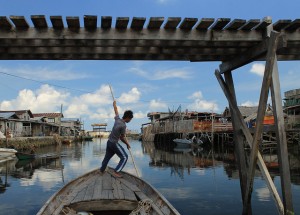 Past the floating wharf where larger passenger ferries dock, our speedboat finally ran aground a couple of kilometers off Sitangkai, in knee-deep shallows covered in sea grass, orange starfish and black urchins. My guides and I hopped on a passing motorized canoe to better negotiate the low tide and reach the main village. Built over a vast sandbank off a sliver of land only 14km away from Borneo, Sitangkai is an unconventional town. It’s a water- world free of any form of wheeled transport, and navigable only by foot across narrow catwalks linking stilted houses, or by wooden longboats called tempel on canals that give the Sama settlement its nickname, the “Venice of the Philippines.” Offshore, Badjao fishermen unfurl their white sails to catch the morning’s first breath.

In Tawi-Tawi, I realized that one could be geographically farthest as can be from Philippine civilization, yet closest to the heart of its legends, traditions and culture.  For visitor assistance, please contact provincial tourism officer Salve Pescadera at +63 (910) 671 6367 or +63 (939) 837 3221.

20 Replies to “Tawi-Tawi: Pearl of the South”