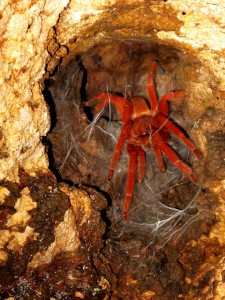 Philippine Orange Tarantula (Selenobrachys philippinus), endemic to Panay & Negros
Covering an area of 854 hectares, the Bulabog Puti-an National Park in Dingle, Iloilo, Philippines is a nature reserve with limestone outcrops and 34 caves. It is home to monkeys, wild chickens, 18 bat species, endemic snails, and native orchids. Because of a strong, sudden downpour, I spent a night in this park en route to Roxas City. The forest ranger offered me to stay at one the huts at the park entrance. 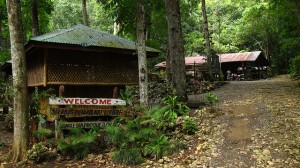 Entrance to Bulabog Puti-an National Park
Early the next morning, we set out to visit some of the caves following an old mining trail flanked by century-old dao (New Guinea walnut) trees. Maestranza Cave is a historical site of revolutionary leader Don Francisco Jalandoni’s headquarters and ammunition factory during the turn-of-the-century Filipino-American War. Spanish graffiti – which my guide misattributed as Latin – were scribbled across the walls by Jalandoni and his men. One of them read: El que ama verdaderamente a su patria no mira su provecho propio (He who truly loves his country does not see his own advantage). Another patriotic message read: Los Republicanos Juran Morir Antes Que Entregarse (The Republicans Swear To Die Before Surrendering). Meanwhile, smallish Tuko Cave boasts of phallic formations (as with many caves in the Philippines).
But the most exciting spot was Guizo Cave – the largest cave system in the park – which harbors strange critters like giant crickets, tailless whip scorpions and orange tarantulas! Prized by spider collectors all over the world for its rarity and beauty, the Philippine Orange Tarantula (Selenobrachys philippinus) is found only in the islands of Negros and Panay. They possess a mild venom and their bite can be very painful. So scrambling through a pitch-dark cave armed with nothing but flashlights was pretty unsettling. Guizo Cave was also home to hundreds of bats. We observed some juveniles up close, roosting in the crevices of the low-hanging ceilings. It was my first time to encounter such a diversity of wildlife inside a cave system. 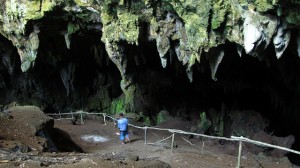 Entrance to Guizo Cave
How to Get There: From Iloilo City, hop on a public bus bound for Roxas City and alight at Dingle town (1 hour). Motorbikes (habal-habal) or tricycles can take you to the entrance of the park. Barebones accommodation available at the park entrance. Ask for a mosquito coil, or wear repellant lotion at night.