Panorama of Temples of Bagan, Myanmar (Burma) on CleVR.com

It was 4:00 AM when we reached the township of Nyaung U, gateway to the Bagan Temples. As with the most part of our 11-hour bus ride from the capital of Yangon, it was pitch black here. The inn we visited would be charging us for a night’s stay if we checked in before sunrise, so we decided to watch the day break from a vantage point first, as one of the horse cart drivers we met at the bus terminal suggested. We trotted away from Nyaung U to the open fields. I could barely make out the surroundings. The silhouettes of trees and what I thought were small temples melted into an amorphous backdrop. 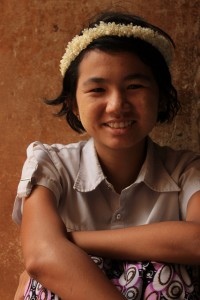 A friendly smile brightens up Sulamani Temple
An hour later, the shapeless shadows defined themselves as sunlight dappled the sky from light blue to tangerine. Atop a large stone platform above some ruins, Bagan gracefully unraveled its glory – a 360-degree expanse of over 4,400 temples peppered across a dusty plain flanked by the mighty Ayeyarwaddy River. The expansive heritage site could easily rival more popular ancient monuments such as Angkor Wat, Borobodur or even the Great Wall, if it wasn’t for the political isolation of the country, ruled by a military junta. 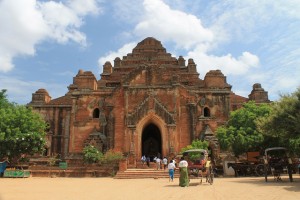 Dhammayangyi Temple, the largest among the temples of Bagan

Later, a teenage Burmese girl named Htay Htay joined us to admire the sunrise. Her family looks after some of the nearby temples. Together with her younger brother Ko Ko, she invited us to visit her home where her relatives showed us how to don a longyi (a plaid tube skirt similar to the Philippine malong) and wear thanaka (a natural cosmetic made from tree bark worn by both men and women). Meeting Htay Htay’s family was one of the best experiences from our week-long Myanmar trip. 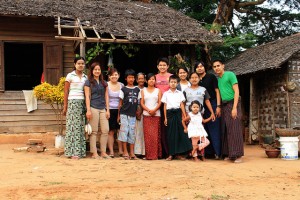 Htay Htay’s family taught us how to wear longyi and thanaka.
Can you distinguish the locals from the wannabes?

Covering an area of over 40 sq km, a majority of the temples were built between the 11th and 13th centuries, when Bagan was the capital of the first empire in Burma. Visiting every temple will take forever, so most visitors hire a horse cart to visit the most popular edifices. Most of us in the group opted to rent a bike, while the rest got a horse cart. The most impressive structures were Thatbyinnyu Temple (the tallest), Dhammayangyi Temple (the largest, and because of its pyramidical shape, looks like a Mayan temple), Sulamani Temple, Ananda Temple, Mahabodhi Temple (modeled after the original in India), and Bupaya Pagoda. 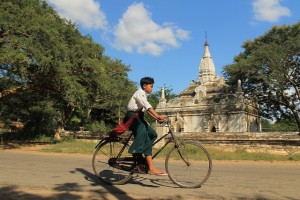 A schoolboy biking home at Nyaung U
While horse cart tours are a convenient way to see the major temples, biking provides the opportunity to explore the temples at your own pace. On the second day, we rode a bike from Nyaung U to New Bagan, stopping by small temples along the way that afforded us secluded views from atop their spires. It was exciting to hunt for a way to climb the temples, looking for small passageways and stairwells that led to a vantage point overlooking the vast fields punctuated by countless stupas. 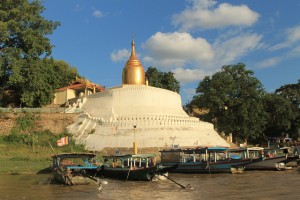 Bupaya Pagoda along the Ayeyarwaddy River
Aside from touring the grounds on bicycle or horse cart, riding a boat down the Ayeyarwaddy offers a different perspective of the temples. From the riverside Bupaya Pagoda, we boarded a motorized longboat with took us on an hour-long tour upriver. Aside from the ancient temples peeking above the treeline, we admired the the riverside villages and teak monasteries. Our boat floated past villagers washing their laundry and taking a swim in the river. Whether it be by horse cart, bicycle or boat, Bagan will surely not disappoint even the most obsessive of temple-holics.
For information on how to get there, check out my seven-day itinerary in Myanmar.