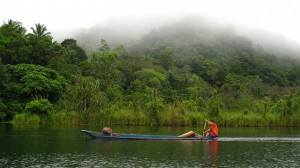 Lake Danao National Park – a guitar-shaped lake in upland Ormoc
After spending a few days exploring the beaches, lakes and caves of Camotes Islands (Cebu), I took a spontaneous detour to Ormoc City in Leyte before going back home to Cebu City due to its proximity to the islands. From Santiago Beach, I hired a habal-habal (motorbike) to take me to Puertobello pier in Tudela, where I caught a lantsa (ferryboat) to Ormoc via Ponson Island.
The downtown area of Ormoc is pretty much like every other Philippine city with its buzzing tricycles and grimy streets. There are only a few things to see in the city. There’s the Dominador Tan ruins from World War II near the floodway. And, at night, the seaside BBQ Park is a relaxing place to enjoy quintessential Visayan grill of meat or seafood. 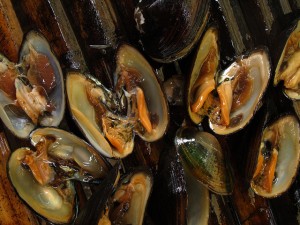 Giant mussels (tab) fresh from Lake Danao
Since the massive flashflood of 1991 that killed over 6,000 people, Ormoc has been pretty much low-key these past two decades. But, on a positive note, I’ve long known that this port city has some of the sweetest “Queen” pineapples in the country, which I grew up eating in Cebu. You can see rows of stalls selling the spiky produce whole near the bus terminal, and vendors hawking skewered slices downtown. The best bargains, however, are found at the warehouse of Ormoc Farmers, Inc. (OFI) at 806 C. Aviles St, where fruits can be sold, depending on the grade, to as cheap as P8 per fruit! Upon my mother’s request, I ended up lugging around 12 pineapples back home after the trip. 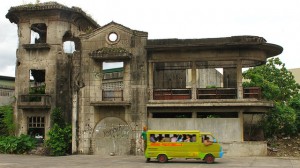 Sen. Dominador Tan Ruins are remnants of WW-II
The most pleasant surprise of the spontaneous stopover, however, was visiting Lake Danao National Park just located 30 minutes away from the city center. A northbound jeepney dropped me off a turn-off where a habal-habal took me through an uphill dirt road to the lake. Along the way, there were interesting views of geothermal power plants releasing steam in between the faraway forests. Lake Lanao is a “guitar-shaped” body of freshwater three kilometers long at an elevation of 2,100 feet (640 m) above sea level. The motorbike driver took me to a viewpoint overlooking the lake, then offered to become my boat guide as well for a quick paddle around the foggy lake. 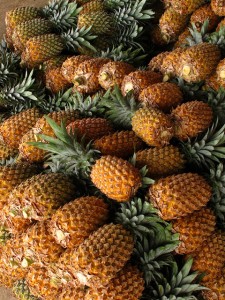 Ormoc’s Pride – the sweetest Queen pineapples
Lakeside vendors sold pako (edible fern) and large freshwater mussels called tab with soft yellow flesh like stuck out like tongues. Because of their tab-ang or bland taste, these mussels are best enjoyed adobo-style flavored with soy sauce, vinegar and spices. After the boat ride, I ended my lake visit with a hefty serving of adobong tab with rice before heading back to the port to catch a fastcraft home.
HOW TO GET THERE: There are direct flights to Ormoc from Manila. By sea, there are fast crafts between Ormoc and Cebu City: http://www.supercat.com.ph/destinations.asp