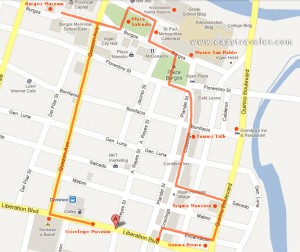 Location: Vigan City, Ilocos Sur
Starting Point: Crisologo Museum
End Point: Crisologo Street
Distance: 3 km
Duration: 8 hours
Along cobblestone streets, horse-drawn carriages clip-clop through beautifully weathered mansions finished with terracotta roofs, capiz shell windows and wrought-iron grillwork. No other town in the Philippines evokes old-world allure better than the provincial capital of Vigan in Ilocos Sur, 408 km north of Manila.
Chinese merchants frequented this trading post, strategically located on the mouth of the Abra River, long before the Spanish Crown, who colonized the archipelago for over three centuries, established it as the political and religious centre of northern Luzon in 1572. The town took its name from the bigaa (giant taro) plant that thrived along its rivers, which served as conduits of commercial and cultural trade for centuries. Because of its direct links with China, the town supplied goods for the Manila-Acapulco Galleon Trade between the Philippines and Mexico until 1815.
Exploring the historic core of this city is like stepping into a time machine. With its unique blend of Asian design and construction with European architecture and planning, the townscape transports you centuries back when the Philippines was a Spanish colony. Unlike other colonial towns in the country that have been largely destroyed by war, neglect and urban development, a significant number of landmarks built from the 18th to 19th centuries remains intact. The old quarter is composed of more than 180 ancestral homes, administrative buildings, religious structures and public squares.

The town’s saga continued well into the 20th century. ‘After the Second World War, many families abandoned their ancestral houses and moved to Manila to seek a better life. Vigan was like a ghost town,’ explains Marjo V. Gasser, one of the first heritage advocates who campaigned for the town’s conservation. ‘It took us more than a decade to resurrect the city.’ Their hard work and perseverance paid off when the Historic Town of Vigan was declared a UNESCO World Heritage Site in 1999, as the best-preserved example of a planned Spanish colonial town in Asia.

• This walk is circuitous, so one can start it at any point. However, most of the bus terminals are on the southern end of the city center. The bus stations of Dominion and Aniceto are near Crisologo Museum and Simbaan a Bassit, so I’d recommend you start here, especially if you’re visiting Vigan as a day trip from elsewhere. Crisologo Museum (entrance fee: donation only) is the ancestral home of a prominent lawyer and politician, while Simbaan a Bassit, which means “small church” in Ilocano, is a cemetery chapel built in the 1850s.

• Walk up Quezon Avenue to the Burgos Museum (entrance fee: PHP 10), residence of martyr-priest Fr. Jose Burgos and a branch of the National Museum.

• Stroll to Plaza Salcedo where revolutionary heroine Gabriela Silang was hanged in the 18th century. Don’t miss the empanada (sausage turnover) and okoy (shrimp pancakes) sold at the food stalls!

• Nearby is the Arzobispo, the only Spanish-period Archbishop’s residence in the Philippines that’s still in use. It houses the Museo Nuevo Segovia (entrance fee: PHP 20), which has a collection of paintings, manuscripts and religious articles.
• Next to the Arzobispo is the impressive St. Paul’s Metropolitan Cathedral (Vigan Cathedral), a reinterpretation of European baroque architecture made to withstand tremors, hence the term “earthquake baroque.” The first church was established in 1574 by conquistador Juan de Salcedo. Adjacent to the cathedral is Museo San Pablo (entrance fee: PHP 20), another religious museum.

• Detour along Salcedo St towards the Syquia Mansion (entrance fee: PHP 20), residence of President Elpidio Quirino and his wife from the Syquia clan.
• A few blocks down is another exquisite example of bahay na bato (stone house) architecture: the Quema House. It’s a private residence, but the caretakers occasionally allow visitors to tour and photograph the house. Just ask politely.

• Return to Calle Crisologo. You may continue wandering its streets until dusk when the street lamps light up to intensify its charm, and enjoy a lantern-lit al fresco dinner at Cafe Leona. Another option, if you have spare time, is to hop on a tricycle to Cristy’s Loomweaving (+63 9164919320) in Brgy. Camangaan to watch how abel iloco (Ilocano cotton fabric) is crafted. Or to RG Jar Factory (+63 777231550) along Gomez St in the Burnayan quarter to watch how burnay jars and other pottery are shaped and fired in 19th century kilns.

• A less touristy way to end your day is to watch the sunset at Mindoro Beach, a short tricycle ride (PHP 20-40, 15 mins) away from the city centre, as villagers catch fish the traditional way along the pounding surf of the South China Sea.

HOW TO GET THERE: Vigan is 7 to 8 hours from Manila by bus. Popular bus lines are Partas (PHP 605) and Dominion (PHP 580), which depart from Cubao, Quezon City. The cheapest ride is Aniceto Trans at Sampaloc, Manila for only PHP 420, but they don’t have frequent trips, so call them at +632 7315180 for the schedule. The bus from Vigan to Manila leaves once daily at 9:00 PM along Liberation Blvd, near Simbaan a Bassit.

WHERE TO STAY: Complete your time travelling by sleeping on a splendid four-poster bed in an airy colonial mansion. A bahay na bato (stone house) built in 1870, Villa Angela Heritage House was once the residence of the gobernadorcillo (municipal governor). It offers exclusive bedrooms in a spacious home furnished with hardwood furniture, antiques and family memorabilia. No wonder Tom Cruise enjoyed his stay here while filming Born on the Fourth of July. Villa Angela Heritage House, 26 Quirino Blvd, tel: +63 (77) 7222914. Double A/C rooms start at P1,500, inc. breakfast.

A cheaper option that doesn’t sacrifice on rustic ambience is Grandpa’s Inn (Tel. +63 77 7222118) is a Spanish ancestral home converted into a cozy hotel with rustic ambiance, great customer service and delicious food. And starting at PHP 650 for a double fan room (common T&B), it’s the best value in town!

For those looking for basic accommodation, check out the newly-opened Henady Inn (Tel. +63 77 7228001 or +63 9175158001), located along the National Highway in Bantay, next to the Caltex Station and just right across the Vigan City Arch. The town center is just 15 minutes walk away, or you can take a short tricycle ride. Rates start at PHP 200/person/night for a fan dorm room. Private double rooms are great value at PHP 600 with A/C, CATV and toilet.

Special thanks to local travel blogger Edmar Guquib of http://edmarationetc.blogspot.com/ for touring me around Vigan on his motorbike during my revisit last weekend!