Christ the Redeemer – A Glimpse of Rio de Janeiro in Capiz! 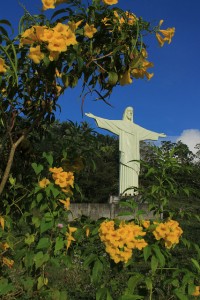 For a glimpse of Rio de Janeiro, look no farther than the province of Capiz, gazing up a five storey tall white-painted replica of the world’s largest Art Deco statue, Cristo Redentor or Christ the Redeemer, built from 1922 to 1931.

Standing on a hilly private lot in the countryside of Ivisan municipality, the statue was erected a few years ago and has been attracting a number of tourists and motorists, who are drawn to its commanding presence along the national highway between Roxas and Kalibo. According to the caretaker, it took around 20 people to build the statue in eight months. It doesn’t look impressive from afar, but as you approach it, the sense of scale and grandeur may come close to the 130-foot original.

HOW TO GET THERE: Take van or jeepney at Km 1, Roxas Avenue in Roxas City bound for Kalibo or the western municipalities of Sapi-an or Mambusao. Alight at Barangay Malocloc Sur in Ivisan, some 20-30 minutes away from the provincial capital. The statue is just along the highway.


For accommodation and other travel advice, check out my DIY walking tour of Roxas City.