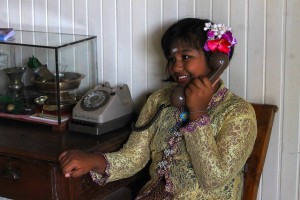 Most travelers to Melaka or Penang may be familiar with the predominant Baba Nyonya or Peranakan culture of the Straits Chinese who flourished in the trading settlements. However, the heritage city is also home to other creole cultures, which evolved from the intermarriage of foreign traders with the native people some 500 years ago.

Besides the Kristangs or Eurasian Malays of the Portuguese Settlement, there are the Chetti (also spelled Chitty) people, who are descendants of Indians traders from Tamil Nadu, who first arrived in Melaka to trade spice and merchandise as long ago as the 15th century. As a matter of fact, the word chitty means “trader” in Tamil. These Tamil traders came for extended trips as bachelors or without their wives, and they married local women in Melaka of various ethnicities such as Malays, Chinese, Javanese and Batak, thereby producing a hybrid culture of “Indian Peranakans”.

Today, the Chitty Village (or Kampung Chetti) in Jalan Gajah Berang, Melaka is home to a small community of 20 or 30 families living in harmony with non-Chitty neighbours, mostly Chinese. A small heritage museum displaying costumes, artifacts and photographs called Muzium Chetti is a great place to start in order to understand the unique culture of the Chitty people. They adapted to local customs, and, instead of speaking Tamil, the Chitty speak a Malay dialect with Tamil loan words. However, the Chitty still adhere to Hinduism as their religion. Some also practice ancestor worship, a cultural influence from the Chinese.

They have also incorporated some Malay dishes into their diet. At the Kandasamy Raja household, we watched how a spicy dish called haram jada – which is actually a Malay curse word – was cooked. It is a traditional Chitty stew of mixed vegetables with chili paste, tamarind juice and coconut milk.

The Chitty are truly a fascinating blend of cultures one can find in Malaysia. Unfortunately, their cultural identity is vanishing, as many of them are culturally assimilating into the mainstream Indian, Chinese, and Malay ethnic communities. This small but distinct group of people that has survived for centuries is now on the brink of extinction.

This blog post was made possible through Celebrating 1Malaysia Truly Asia – Melaka, a media tour held last November 23 to 25, 2013. The event was organized by Gaya Travel Magazine and Tourism Malaysia in celebration of Visit Malaysia Year 2014.

Disclaimer: This is a sponsored post. I accept advertisers as long as they are relevant to tourism, adventure and outdoors. For advertising inquiries, please e-mail eazy@eazytraveler.com