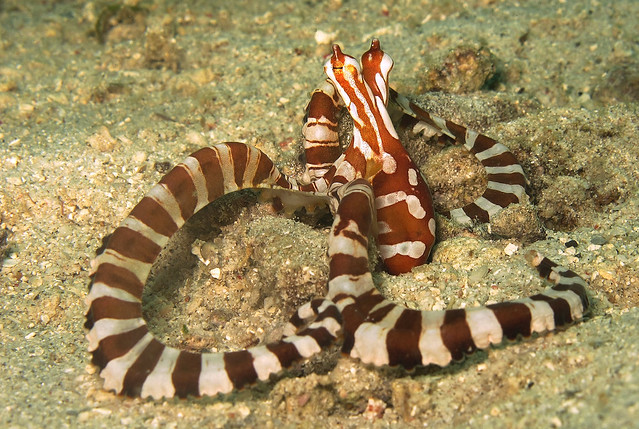 We arrived at the only wreck diving site in Anilao. A Tagalog love song blaring from a seaside village was drowned out by the meditative sound of my muffled breathing as we barrel-rolled from our outrigger boat into the calm water, descending right next to Daryl Laut, a sunken floating casino off the coast of Caban Island in Tingloy, Batangas. As we surveyed the wreckage, our flashlights illuminated its tilted pylons, revealing a phantasmagoria of colour and movement. A rainbow of coral, sponges and tunicates upholstered the submerged skeleton. 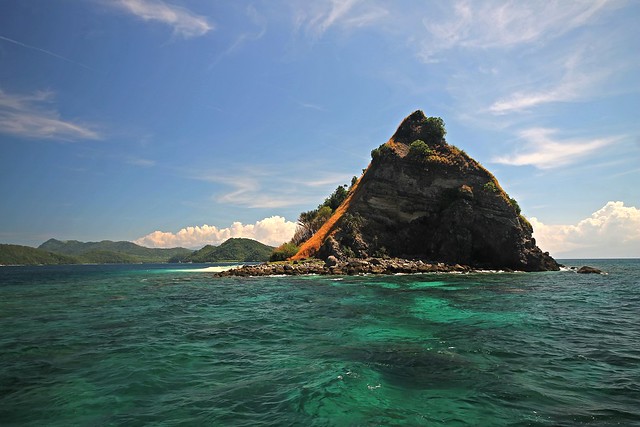 Many of Anilao’s dive sites surround the islands of Maricaban, Caban and Sombrero in Tingloy town 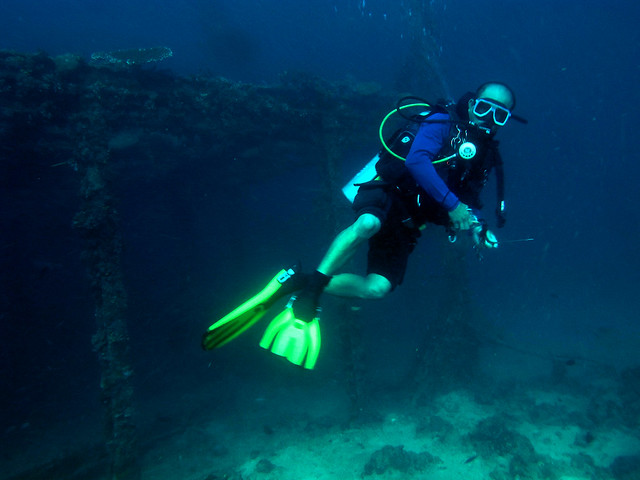 A few minutes into the plunge, the divemaster beckoned me next to a beam, pointing at a lemon-yellow sponge that surprisingly resembled a fish. Upon closer inspection, the curiously shaped outgrowth had small watchful eyes and possessed a most humorous frown. It’s a perfectly camouflaged frogfish! His larger, mottled cousin nearby acknowledged our arrival by awkwardly hopping away in slow motion like an astronaut on the moon. As we finned around, a school of frisbee-size longfin spadefish patrolled the wreck, while a solitary tiger cardinalfish protected a brood of eggs in its gaping mouth. Beneath a rocky ledge, a disco clam with tomato-red filaments flashed its highly reflective tissues like bluish sparks of electricity. In the Philippines, the festiveness of the archipelago carried on beneath the waves. 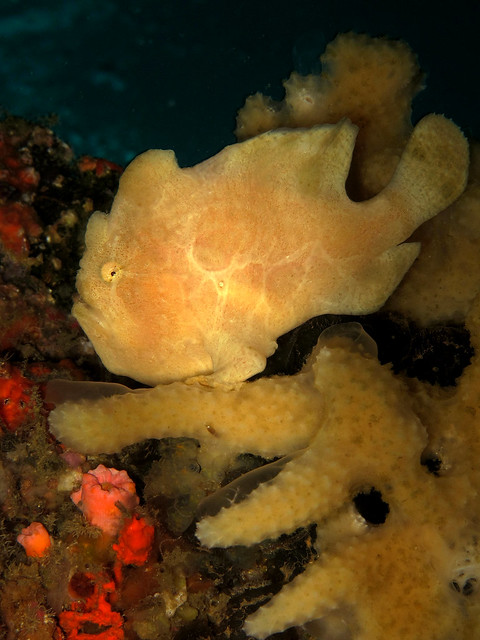 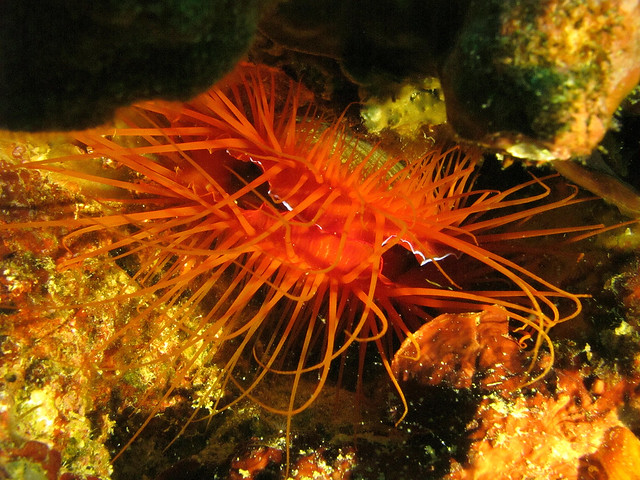 An electric flame scallop (Ctenoides ales) with its electric-like tissues

Every square metre here in Anilao — only a two-hour drive south of Manila — exploded with a plethora of swimming, crawling, writhing living things, the undersea counterpart of the frenetic metropolis. After all, these warm tropical waters belong to the Verde Island Passage, the strait separating the islands of Luzon and Mindoro, where conservationists have found the richest concentration of marine life in the world.

The birthplace of scuba diving in the country, Anilao has been luring divers from all over the world since the 1960s.  An American marine life photographer who has dived from Scotland to Micronesia for the past ten years, Mike Bartick of SaltwaterPhoto.com has been hooked on Anilao since an initial excursion ticked off his wish list of 25 critters in just three days. The California native likened scuba diving here to peeling layers of an onion, as one discovers something new on every dive. “At first, it’s usually the nudibranchs that grab your attention,” he explained, “then as you continue to explore the various habitats, new layers of subjects will be revealed: the flurry of reef fish at coral-laden sites, then benthic critters like hairy frogfish, blue-ringed octopuses and so on. At the core are super-macro subjects like bumblebee shrimp and other ornate crustaceans.” 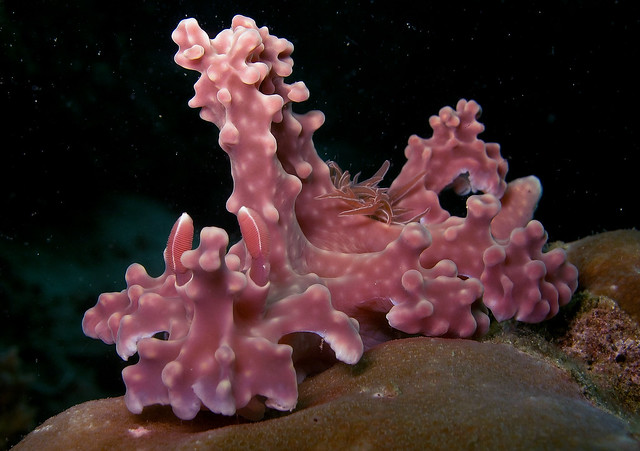 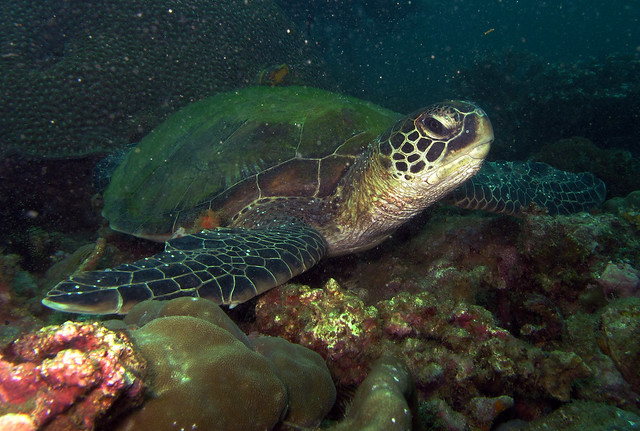 Our following dives at Maricaban and Sombero islands affirmed Mike’s analogy. A lavender nudibranch — one of more than 700 species found in these waters — instantly caught our attention, as the morsel inched over brain coral like a misshapen gummy bear. A blue ribbon eel slid in and out, removing dirt from its burrow with its jaws, below a storm of anthias, damselfish and triggerfish. There were also cryptic bottom-dwellers like scorpionfish and stonefish that blended in the rubble. Sticking our heads even closer to the reef, we ogled at toothpick-thin pipefish and minuscule crabs hiding in mushroom and whip corals. While we stared in wonder, however, at this underwater circus, occasional glances at the deep blue behind us also revealed larger residents like hawksbill and green sea turtles. Pelagic animals are also known to make cameo appearances, such as giant trevally, barracuda, manta rays or, if you’re very lucky, a whale shark — the largest fish in the ocean.

Geographic Note on the Name “Anilao”

Actually, there is no town in Batangas called Anilao. Originally referring to the village used as a jumping-off point for dive trips when the coastal road was non-existent, Anilao now casually refers to a collection of over 50 dive sites (including world-class muck diving sites like Secret Bay) peppered around the Calumpang Peninsula and the offshore islands of Maricaban, Caban and Sombrero. Located in the laid-back province of Batangas, the mountainous peninsula stretches between two deep-water bays, creating a natural obstruction along the species-rich passage. Today, the Anilao Area encompasses dive sites located in the towns of Mabini, Tingloy and Bauan.

How to Get There / Where to Stay

For information on how to get to Anilao and where to stay, please check out my previous post on muck diving in Secret Bay.