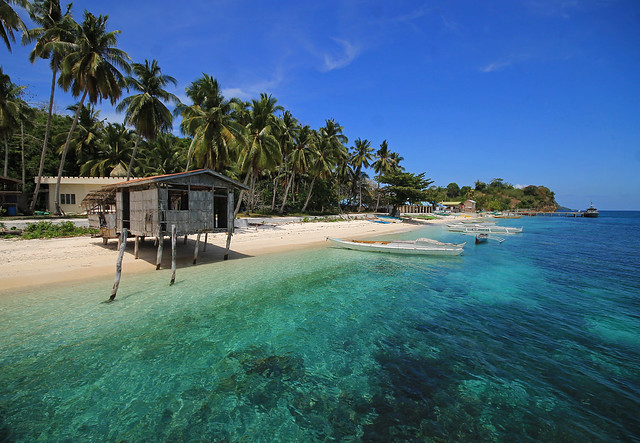 A fisherman told me to snorkel past the village jetty to admire an extensive growth of coral that he said looks like “big plates”. The table coral was more impressive than described, descending towards the drop-off like the undersea counterpart of Balinese rice terraces. I float across the vibrant reef. Posses of purple-eyed cardinalfish peered from their underwater patios, while countless blue-green chromis zigzagged through their refuge of labyrinthine tree-like coral. Now and then, a shy Moorish idol or butter-colored butterflyfish would grace the remarkable scenery with its striped elegance, before ducking behind a bulbous head of coral. 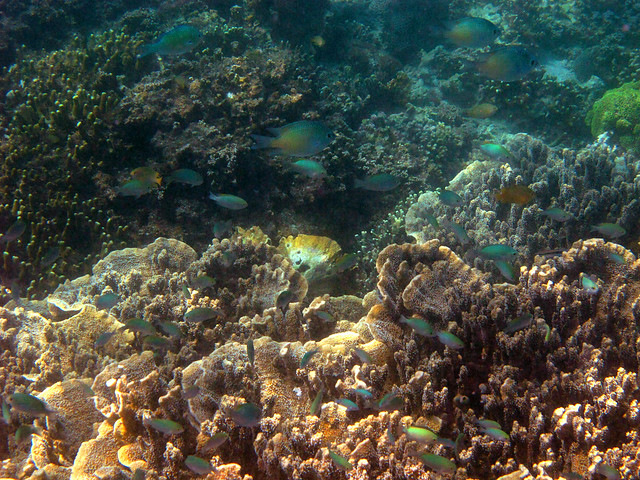 Snorkeling the coral reefs off Bangas Beach on Marungas Island

The buzzing sound of a passing jungkung – the local wooden-hulled boat – prompted me to surface. I removed my mask and snorkel, treading in calm, turquoise water. A white-sand beach lay before me, stretching away along a row of coconut trees from an abandoned hut on stilts that leaned in submission to the sea. This beach wouldn’t be out of place in Palawan or Bohol, until I noticed a man in military fatigues, armed with an M-16, watching over me from the hut’s doorway. A small, pale yellow mosque beneath the coconuts called out afternoon prayers. I then recalled that this is not simply another tropical holiday in the Philippines. I was in Sulu – the archipelagic province that stretches halfway between Mindanao and Borneo – accompanied by four Marine escorts to ensure my safety in the islands of Hadji Panglima Tahil, 20-minutes by boat from the provincial capital of Jolo. 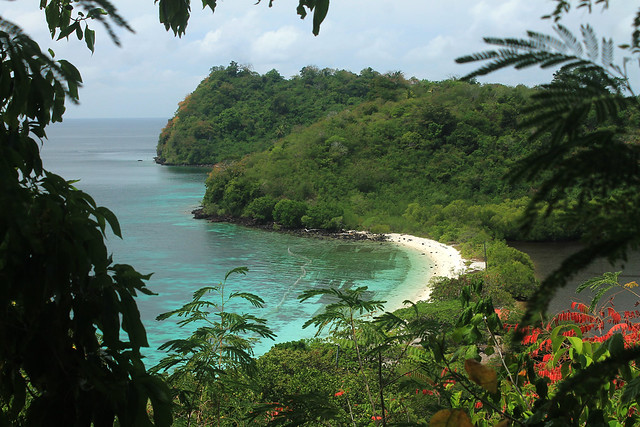 Ramos Beach was named after the former president who loved to scuba dive here! 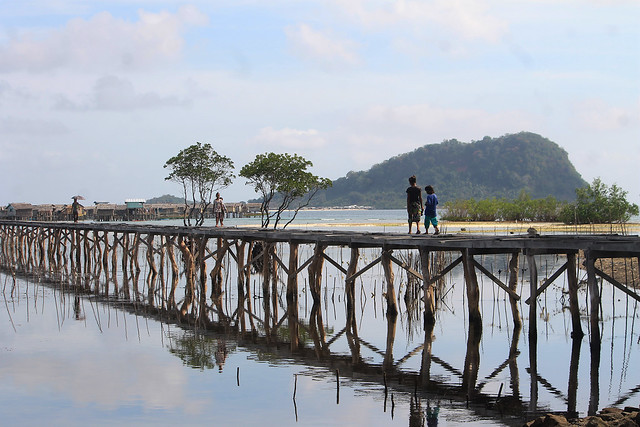 This footbridge to Sitio Likud almost measured a kilometer long!

In comparison to the rest of the province, the smaller islands of Hadji Panglima Tahil – especially Marungas Island – have the biggest tourism potential, owing to its proximity to the capital town of Jolo, which is served by flights and overnight ferries from Zamboanga City. As seen from the right side of the plane as it descends to Jolo Airport, the atoll-like islands are ringed with beaches and covered with saltwater marshes and lagoons in the middle. Besides Bangas Beach in the town center where I snorkeled, a short walk to the west coast of Marungas Island will take you to small crescent of sand called Ramos Beach, named after former President Fidel V. Ramos who once visited the island for scuba diving. 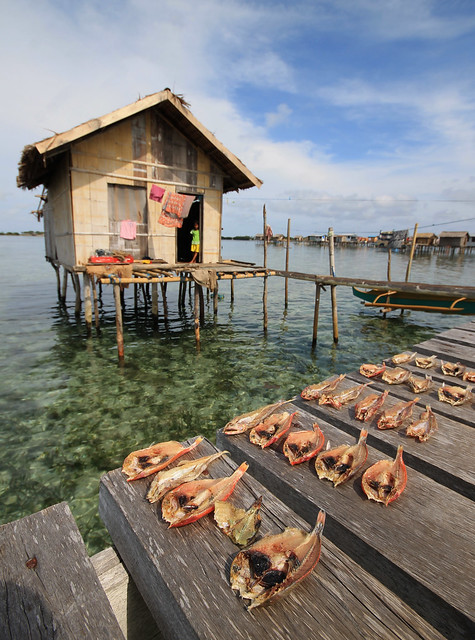 Aside from its white sand beaches and coral reefs, Marungas Island offers a look into the daily lives of the native Tausug and Badjao peoples. The villagers build their homes on stilts at the edge of the islands over tidal flats and sandbanks. Rickety footbridges link the communities together, and with the hilly terra firma that punctuate the islands. Most notably, the stilted walkway connecting the hamlet of Sitio Likud to the town center of Bangas on Marungas Island is a whopping 800 meters long – that’s more than twice the length of what is dubbed “the longest wooden footbridge in the country” in Surigao del Norte.