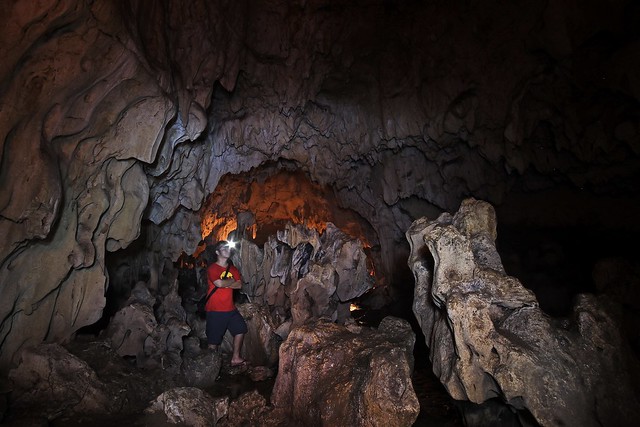 One of the better known attractions of Quirino province are the Aglipay Caves and Campsite, a limestone cave system located in Barangay Villa Sur in the municipality of Aglipay. While nonstop rain spoiled our boating excursion at Governor’s Rapids in Maddela for safety reasons, our team of 10 travel bloggers finally enjoyed our first taste of what the landlocked province had to offer at this subterranean attraction.

It continued to pour as our jeepney pulled into the cave entrance, but the weather sure did not dampen our spirits! The Aglipay Caves consists of 37 chambers, with only eight having been thoroughly explored by spelunkers. Our caving adventure took us through four of these charted chambers.

The Awe and Surprise

Climbing up some steps, we reached the entrance to Cave 1 and simply walked down into the cathedral-like chamber, which was filled with magnificent stalactites, stalagmites and pillars. The smaller limestone formations were also fascinating. Our guide brought us over to a limestone shelf along the cave wall where sparkling calcite formed miniature versions of the Banaue Rice Terraces, similar to the ones I saw in Sumaging Cave in Sagada, Mountain Province but even much smaller. 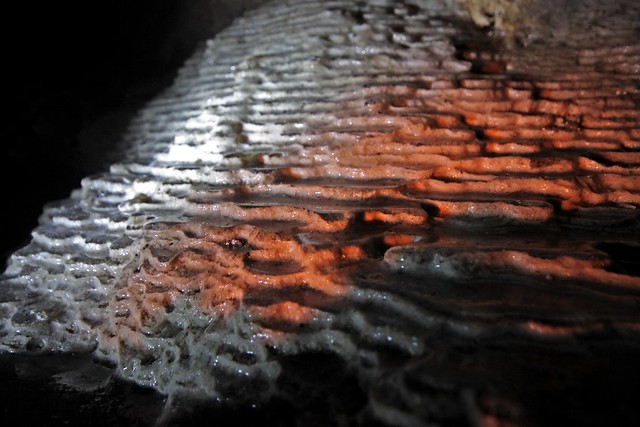 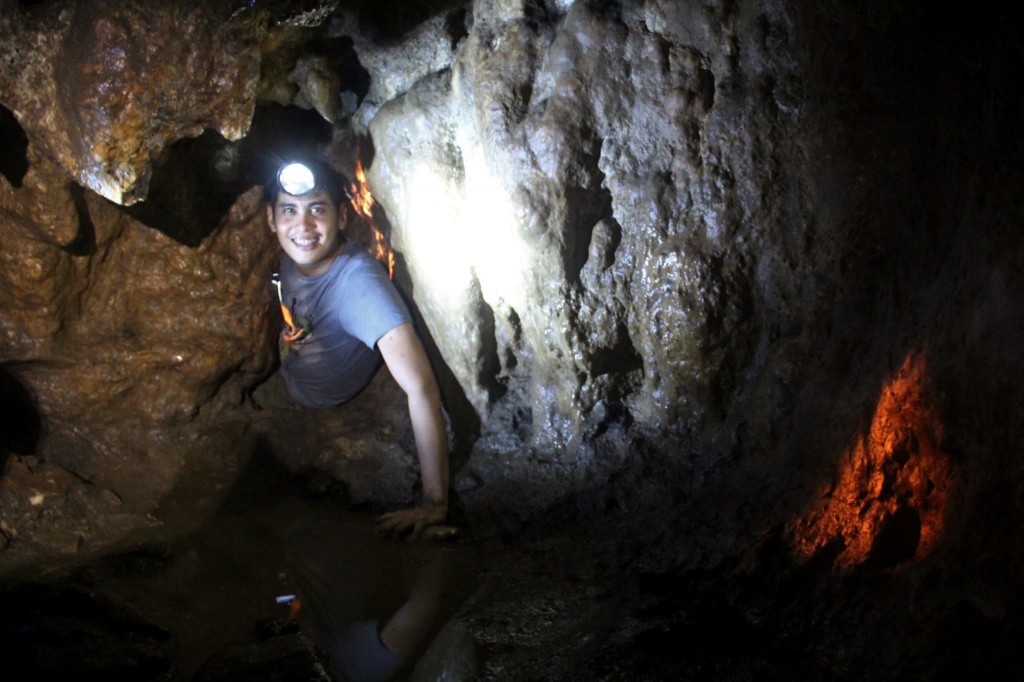 Getting down and dirty as we squeezed into Cave 2. Photo by Kara Santos of Traveling Up

The Duck-Walk and Squeeze

We exited the first chamber effortlessly onto a muddy jungle trail. It was still drizzling outside. I liked this portion because it was a welcome relief from all that subterranean darkness.  The slippery path through the forest brought us to the tight and inconspicuous entrance of – not Cave 2 – but Cave 8, right along a rock face on the left side of the trail. The last three chambers – Caves 8, 2 and 3 – were connected. They were also smaller and more challenging to explore. We clambered down into another hallway of beautiful stalactites and stalagmites. As we wandered deeper into the chamber, the ceiling became lower as we went deeper that we eventually found ourselves crouching really low, moving forward through the passageway by duck-walking.

One of the interesting portions of the caving route was entering Cave 2 from Cave 8 through a small hole. We had to go through the opening one by one, and laughingly enjoyed watching each other emerge on the other side onto a muddy puddle. Cave 2 seamlessly turned into the long corridor of Cave 3. A curious formation of three stalagmites, which our guide remarked was shaped like a wedding scene – complete with a bride, groom and officiating priest – marked the boundary to the final chamber. The last two chambers were filled with more strange formations which were described to me as giant snakes and even a roller coaster! 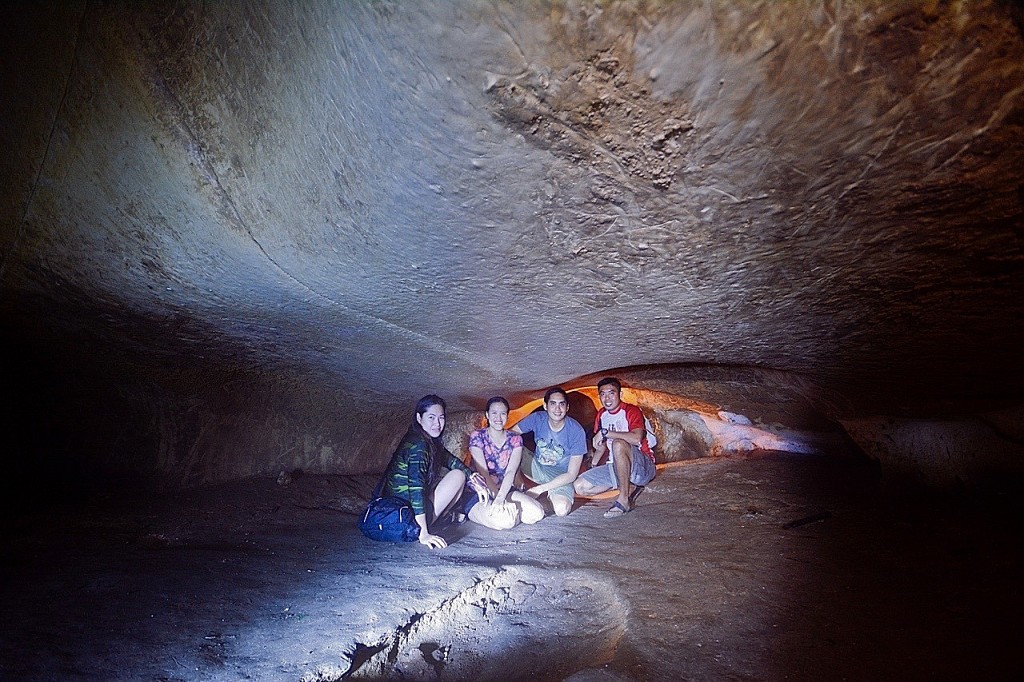 Entering the “duck-walk passage” with Kara and Mica. Photo by Ferdz Decena of Ironwulf 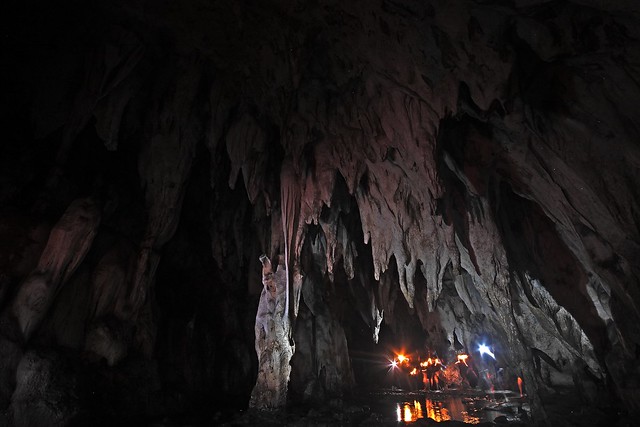 But the most exciting section of our caving adventure was left for the last. Our final climb out of the last chamber was up a 26-step metal ladder with smooth, cylindrical rungs covered in wet mud that made them all the more dangerous. To make matters worse, the ladder was tilted to the right, making every step a life-or-death decision, especially in the very dim light. One slip would send us plummeting down into a dark abyss below with at least a few broken bones. My legs quivered at the thought, but I mustered the courage to venture on, comforted by the fact that we were nearing the end of our endeavor.  Thankfully, everyone made it out alive after exploring the four chambers for nearly two hours at a leisurely pace. And we all felt ready to handle anything our Quirino expedition will throw at us next!

This blog post was made possible through #DiscoverTheUndiscovered, a travel blogger tour of Quirino province sponsored by Tourism Board of the Philippines and the Province of Quirino, held from December 12 to 15, 2014. Among the travel bloggers invited were Ferdz of Ironwulf, Christian of Lakad Pilipinas, Julius of Lakwatserong Tsinelas, Marky of Nomadic Experiences, Mica of Senyorita, Kara of Traveling Up, Izah of Tripadora, Sinjin of Libotero and Eric of Byahilo.

For more information, check out my travel guide of Quirino Province.