The state of Terengganu is well-known for its extensive coastline and island escapes, however, natural wonders can also be found inland. Traveling an hour from Kuala Lumpur to the forested  hinterlands of Hulu Terengganu, our group finds the incredibly vast and beautiful Kenyir Lake or Tasik Kenyir. With a surface area of 250 sq km, it is the largest manmade lake in Southeast Asia, created in 1985 with the damming of Kenyir River to support the Sultan Mahmud Power Station. The lake is surrounded by 14 waterfalls and the world’s oldest rainforest. There are also a number of caves in the area, some of them yielding significant archaeological finds. In 2010, archaelogists discovered human skeletal remains at Bewah Cave believed to be 8,000 to 11,000 years old. 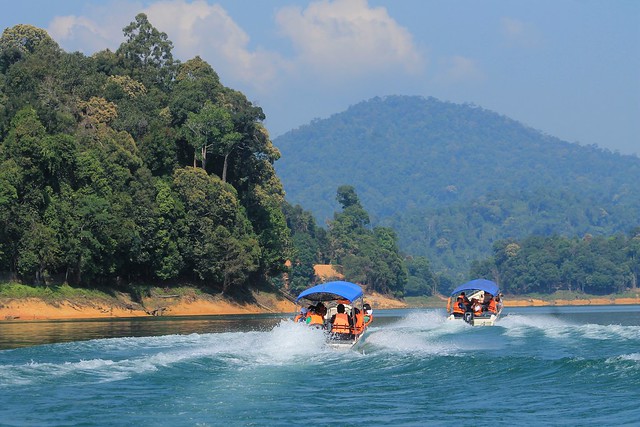 Kenyir Lake in Hulu Terengganu is the largest manmade lake in Southeast Asia! 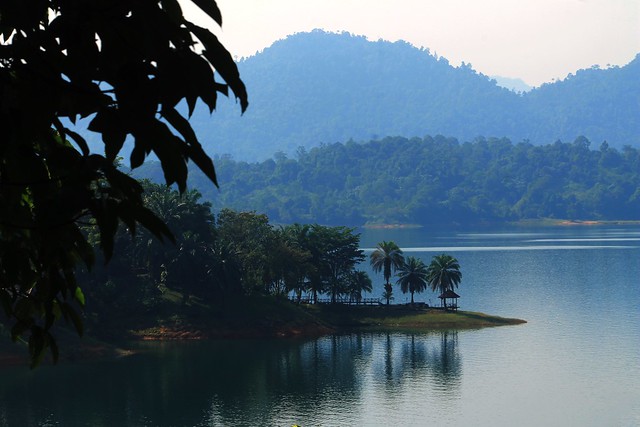 Kenyir Lake is surrounded by 14 waterfalls and the oldest rainforest in the world.

After damming of the river, hilltops and highland areas became islands surrounded by lake water. The lake contains 340 islands, a handful of which have been developed as eco-tourism destinations. The Lake Kenyir area is home to more than 8,000 species of flowers, 2,500 species of plants and trees, 800 species of orchids, and 300 species of fungus. Many of these flora have medicinal and commercial properties which can be discovered at the Herbal Park (Taman Herba) on Pulau Sah Kecil (Sah Kecil Island).  The park abounds with more than 200 traditional herbal species that include Tongkat Ali (Eurycoma logifolia), Kacip Fatimah (Labiusa pumila), Misai Kucing (Orthosiphon aristatu), Mas Cotek (Ficus deltoidea) and many others of medicinal value. The Orchid Garden (Taman Orkid) on the hand displays several species of orchids found in Malaysia and throughout Southeast Asia. Other attractions being developed are the Bird Park, Butterfly Park, Rambutan Garden and Heliconia Garden. 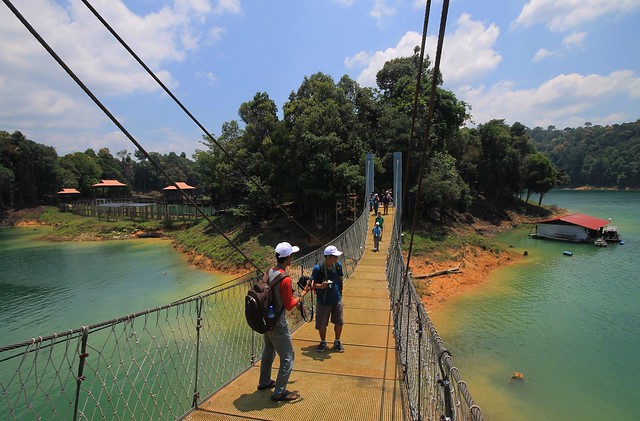 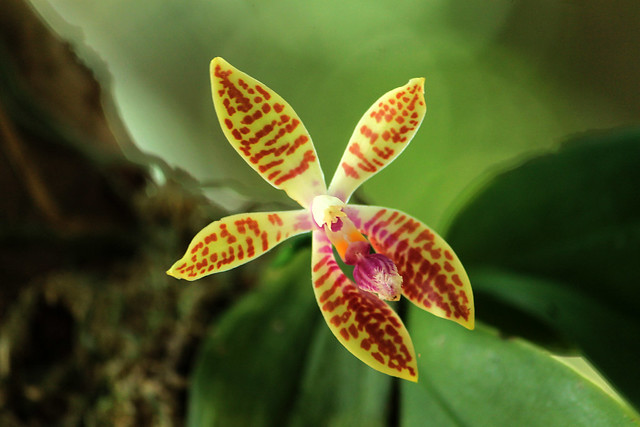 A fragrant orchid species from Indonesia at Taman Orkid.

More than 300 species of fish dwell in the waters of Kenyir Lake. A short hike up the Petang River – 45 minutes ride from the jetty – takes visitors to the Kelah Sanctuary, a refuge for endemic ikan kelah or Malaysian mahseer. Covering an area of more than 407 hectares, the sanctuary is a gazetted protected zone for the preservation and breeding of mahseer and other local freshwater fish; therefore, fishing in the area is strictly prohibited. One however can feed and swim with mashseer, who swarm visitors on a frenzy! 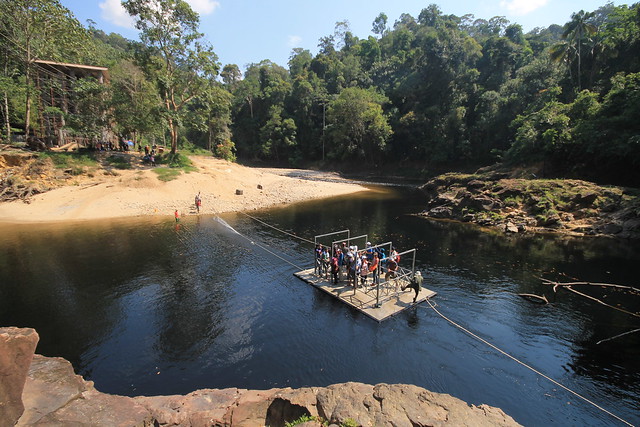 Riding a raft at Petang River, en route to the Kelah Sanctuary. 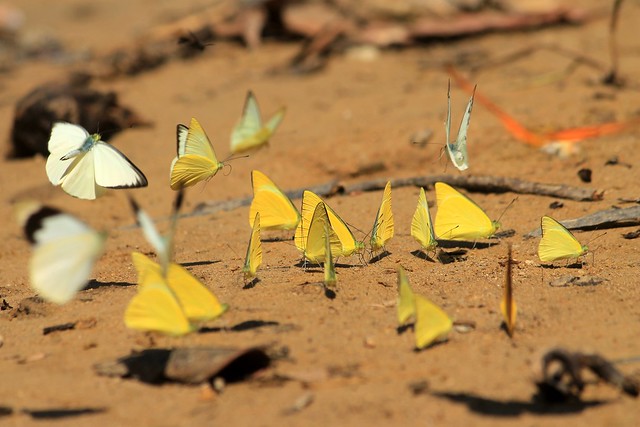 Butterflies on the riverbank of the Petang River. 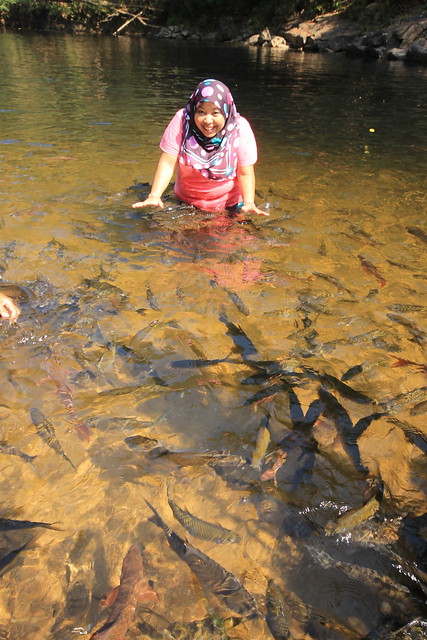 Feed and swim with wild kelah at the Kelah Sanctuary.

The newest attraction at Kenyir Lake, located just across the jetty, is Kenyir Water Park, which features a children’s playground pool and inflatable obstacle course on the lake itself. The floating course looked like child’s play from a distance, but was challenging once you’re actually on it. Children and adults alike struggled to keep their balance on the wobbly floaters to clamber up or slide down ramps. It was definitely an exciting way to cool off from the heat! 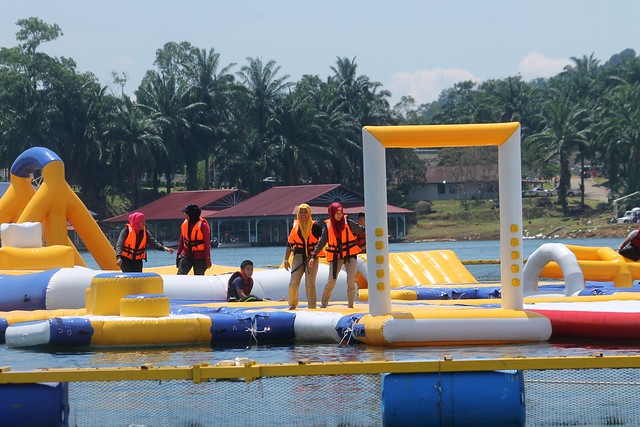 Kenyir Water Park offers a fun way to cool off from the heat!

There is also the Kenyir Elephant Villlage. While I commend the park’s goal to conserve the Asian elephants in Lake Kenyir, I disapprove their use of elephants as entertainment in their elephant shows based on ethical grounds. I prefer that the elephants be free to roam the grounds in a natural setting, instead of having them chained and coerced to perform tricks to visitors.