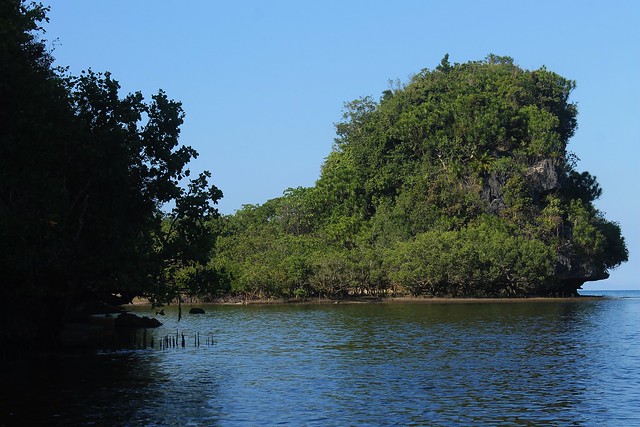 Lamanoc Island in Anda, Bohol is a treasure trove of archaeology and folklore.

Recognized as a “cradle of civilization” in the province, the uninhabited island of Lamanoc (sometimes spelled Lamanok) in Anda, Bohol – a two-hour drive from Tagbilaran City – consists of limestone outcrops with fascinating cultural and archaeological sites. Evoking an eerie atmosphere, the mystical island is cloaked in tangled foliage and obscured by thick mangroves that stretch back to the mainland.

For an island its size, Lamanoc Island surprisingly brims with so much history and folklore. Archaeological artifacts discovered here reveal a thriving ancient civilization residing in this region of Bohol, since the Stone Age. And centuries-old folklore and customs linked to the island color its grim reputation. While visiting Lamanoc, visitors are asked to respect the sacred site by keeping voices low and avoid horseplay, unless you want to disturb the spirits that reputedly reside on the island. 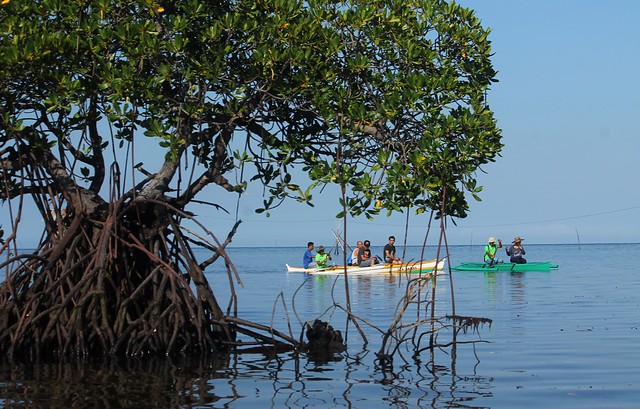 Lamanoc Island can be reached by a 10-minute paddle boat ride from mainland Bohol.

This lonesome parcel of limestone is surrounded by shallow waters. As a matter of fact, when the tide is low, it’s possible to wade in the water and reach the island on foot. For convenience, however, tourists reach the island in 10 minutes by paddle boat from a jetty at the end of a 310-meter boardwalk that cuts through a lush mangrove forest from the access road. 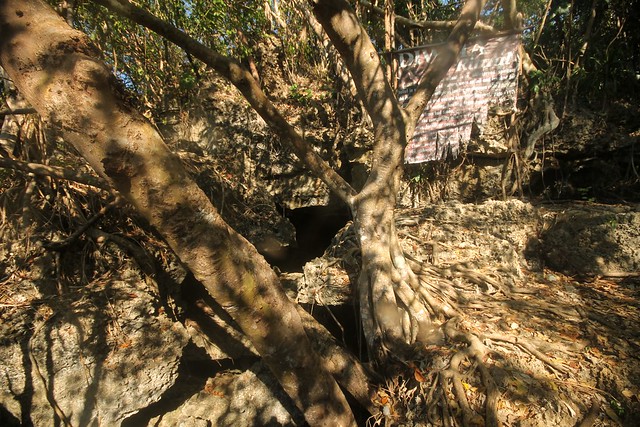 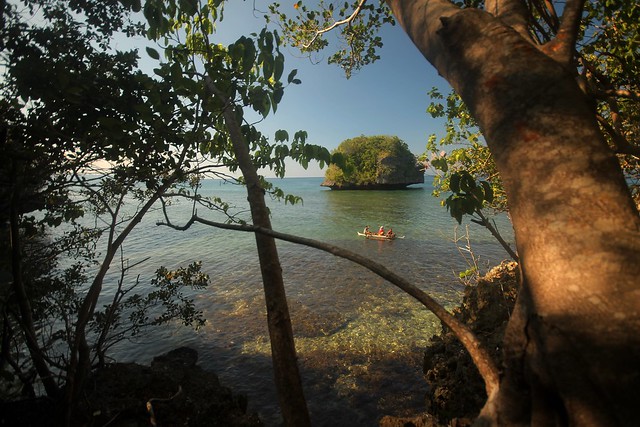 Enchanting view from the entrance of Lamanoc Cave.

Believed to be haunted, no one permanently resides on the island, which traditionally is only visited by shamans or spiritual healers, locally called tambalan or babaylan, who perform diwata ritual offerings at Lamanoc Cave to heal the sick or cursed, or to ask for bountiful harvests. Chickens – or manok in the local tongue – are frequently the sacrifice of choice, hence the island’s name. According to our guide, there are around 20 tambalans (shamans) still practicing in Anda. Since 2004, ritual sacrifices are still periodically performed to appease the spirits and keep the island open for tourists. 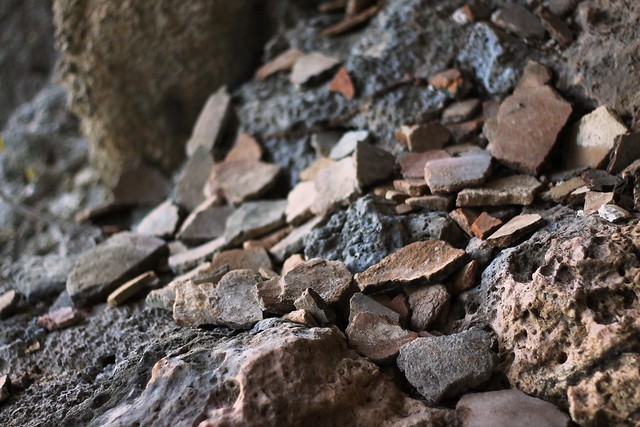 Potsherds of burial clay jars litter the floor of a rock shelter on Lamanoc Island. 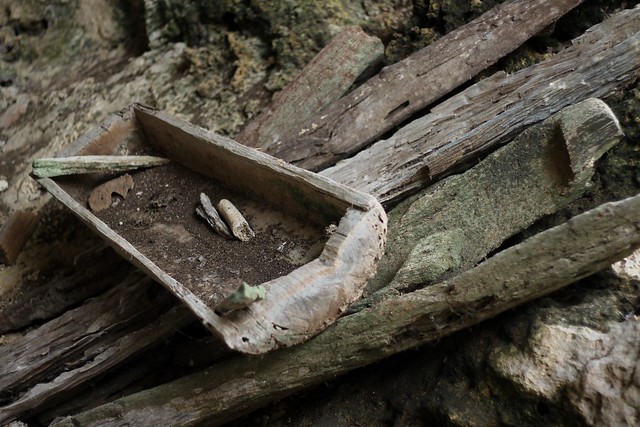 Broken lungon or wooden coffins at the Burial Cave.

The limestone outcrops on Lamanoc Island are riddled with shallow caves, some of them are mere rock shelters along the cliff face while others are tunnels that one can walk through. After paddling from the jetty, we docked at the beach, then walked up around an outcrop to the first attraction: the Burial Cave, a rock shelter overlooking the sea.

I had goosebumps as I entered the area, even before the tour guide started sharing spooky tales of supernatural beings appearing not only to locals but tourists as well.  “A Japanese tourist once saw dwarves sitting there,” our guide narrated, pointing at a rocky ledge littered with potsherds, remnants of secondary burial jars that were destroyed by treasure hunters who found human remains instead of gold or jewels.

Fortunatelty, archaeologists from the National Museum have conducted digs in the cave, rescuing many of the best examples of burial jars and coffins. Wooden coffins are used for primary burials while clar jars were often used for secondary and multiple burials. Aside from the potsherds, there are a few other artifacts left behind after the archaeological excavations.  Human bone fragments from the smashed jars once littered the cave floor but now have been respectfully gathered inside a small makeshift niche fashioned from stones, concrete and glass. At the other end of the cave, fossilized giant clams lay on the ground not far away from shattered lungon or burial coffins with a few more bones resting inside. 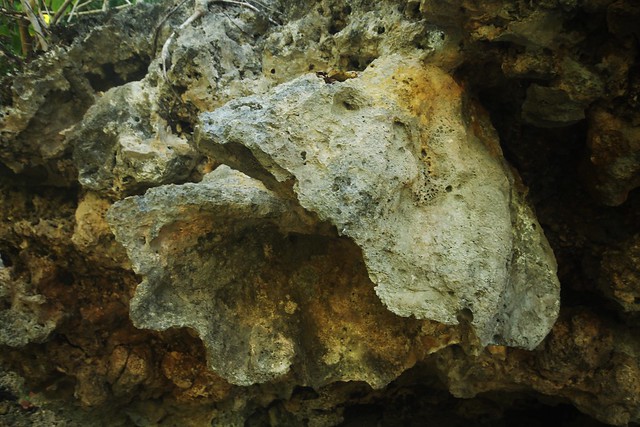 A fossil of a giant clam hangs from a limestone boulder on the beach.

Besides the Burial Cave, there are deeper caves on the island that tell even spookier tales. Ka Iska Cave is named after a woman who the townsfolk of Anda once persecuted as a witch and was banished to the island. It is believed that she lived for some years and died in this cave. “She could strangle you with her long hair; they would get into your eyes, ears and throat,” the guide whispered to me as stood inside her abandoned lair festooned with stalactites and stalagmites. Her upset ghost reputedly still haunts the island, where she has occasionally appears to locals and tourists. 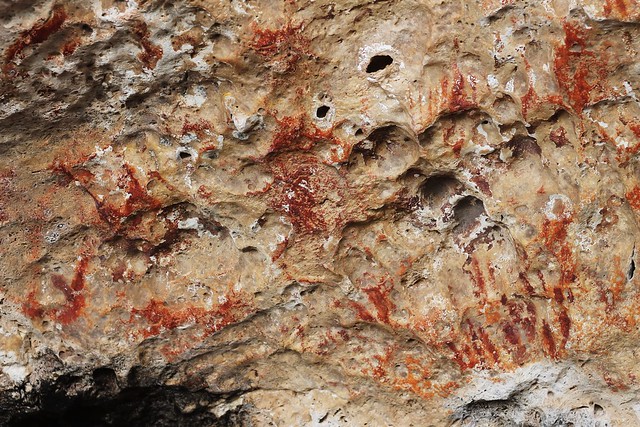 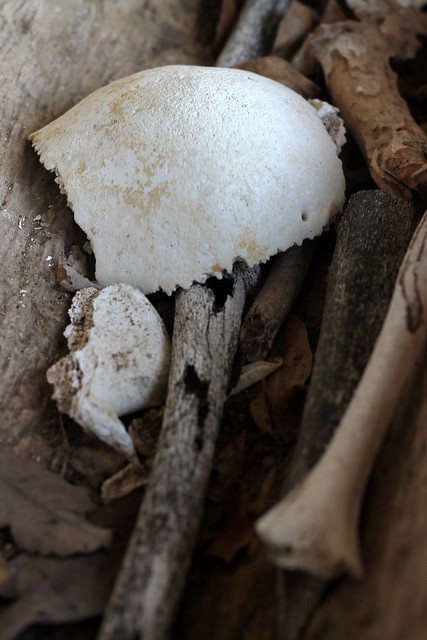 Found in another rock shelter with beautiful views over the sea and the mainland, the abstract paintings were created by smearing hematite (red iron oxide) mineral pigment by hand on the limestone walls, an ancient practice believed to venerate the dead buried in these rock shelters. The pigments were ground up and mixed with a binder – a mixture of water, animal fat, or plant juices – to create paint, which was applied to the rock with brushes made from animal tails or, as in this case, with fingers. Exposure to natural elements has faded many of the hematite hand prints, but some can be clearly distinguished. The hematite used were brought in all the way from the mainland.

A wooden coffin also rests in this rock shelter with fragments of a flat-headed skull, indicating that head binding was practiced by ancient Boholanos. Practiced by a number of ancient civilizations around the world, the practice was a form of beautification, achieved by slowly deforming the head since birth by binding the child’s head with wood or cloth.

Although these hematite hand prints haven’t been carbon-dated yet, experts hypothesize that they belong to the Paleolithic or Stone Age, between 50,000 to 500 BC. Together with the well-known Angono Petroglyphs in Rizal province and other petroglyphs and petrography across the country, these hematite prints are tentatively listed as UNESCO World Heritage Site.

How to Get Here

Located 100 kilometers from Tagbilaran City, Anda is two to three hours away by bus or van. Tricycles can then take you to the jumping off point to Lamanoc Island at Badiang, roughly five kilometers from the town center. For convenience, it may be more practical to rent a car with driver from the city, especially if you’re traveling in a group.  Allot two to three hours for the island tour.