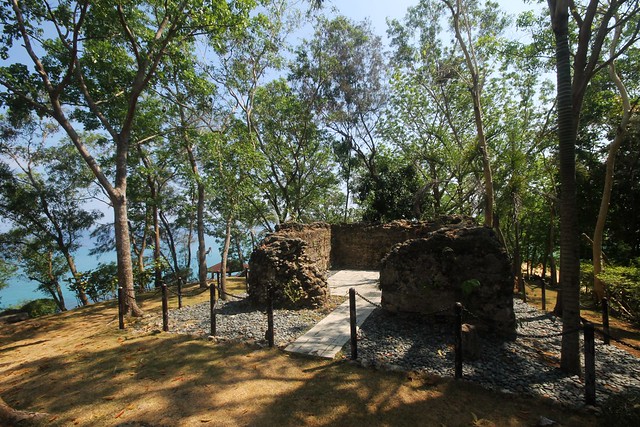 Aloguinsan’s main draw is the Bojo River Cruise, but the town proper has a few attractions worth dropping by before heading to the eco-tourism sites. One such attraction is the Baluarte Park, located right behind the municipal hall.  The heritage site is a small landscaped hill where, as its name suggests, ruins of a Spanish-period baluarte or watchtower built during the early 1800s still stand. The watchtower was built when Aloguinsan was a barrio of Pinamungajan. It was made into a separate town by a Royal Decree of the King of Spain in 1886.

Spanish watchtowers in the locality were two-level structures with the second level built of wood and thatch, supported by a solid foundation of piled coral stone – which often ends of up as the watchtower ruins we see today. Behind the ruins of the watchtower, there’s a crumbling pile of stonework which are remnants of additional fortified walls. 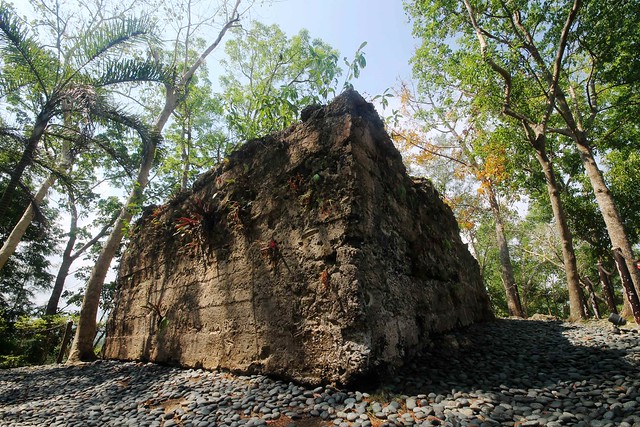 The watchtower was built in the early 1800s as part of a defense line against Moro pirates. 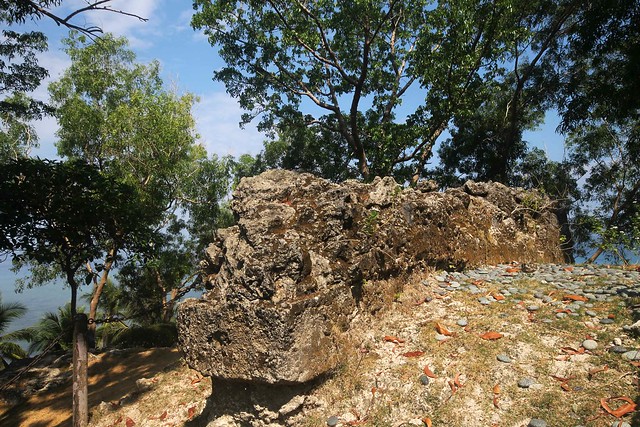 There are also remnants of fortified walls which surrounded the watchtower.

The Aloguinsan watchtower was part of a defense system built across southern Cebu from Santander to Carcar against Moro pirate attacks originating from the island of Mindanao. Stretching a distance of 96 kilometers, this network of watchtowers was designed by Fr. Julian Bermejo (1777-1851), a Spanish priest who earned the title El Padre Capitan for his military genius. Watchtowers provided strategic vantage points to spot Moro vinta sailboats approaching the towns.  Besides building fortifications to protect the townsfolk , the priest also organized counterattacks against the pirates. Read more about Fr. Bermejo in this news article. 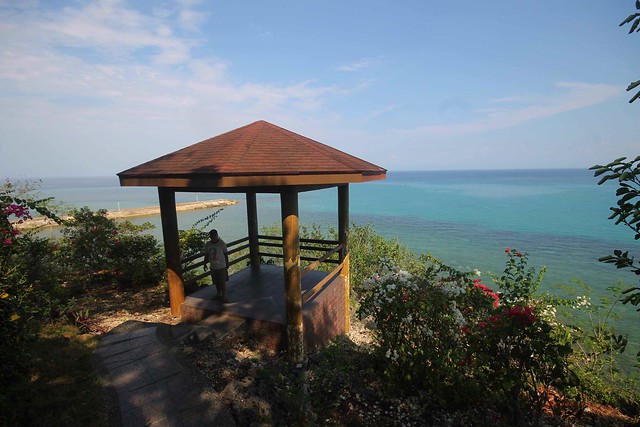 The military tensions of the past has transitioned to the tranquility of the present. The local government has recognized the significance of this heritage structure in recent years, cordoning off the fragile ruins and landscaping the surroundings to make the site more attractive to both residents and tourists. Baluarte Park is now a lovely place to spend a few hours walking its circuitous pathways under the dappled shade of trees. Gazebos have been erected at the edge of the hill next to thickets of bougainvillea with white and fuchsia flowers, overlooking the serene waters of Tañon Strait and the neighboring island of Negros. The historic hill also provides an excellent viewpoint to watch the sunset.

Entrance fee to Baluarte Park is PHP 10 per person. For information on how to get to Aloguinsan, visit my previous post on the Bojo River Cruise.

Fly to Cebu from across the country on Philippine Airlines – your home in the sky!