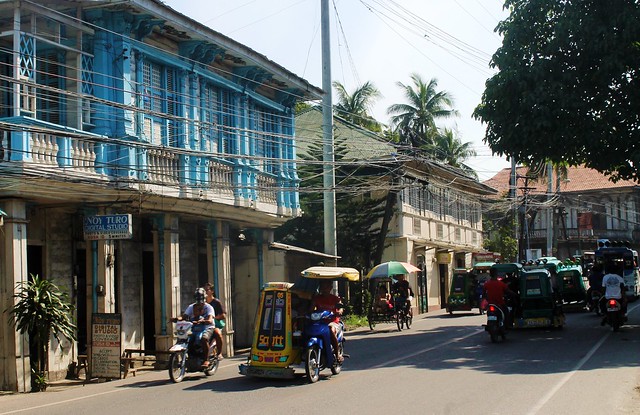 Carcar, Cebu is one of the most important heritage towns in the Philippines.

Carcar City – the one of the newest cities in Cebu— is also the best-preserved heritage town in the province, established in 1599. Together with Vigan, Taal and Silay, Carcar is recognized as one of the most important heritage towns in the Philippines. I’ve passed by this bustling town countless times on road trips to my mother’s hometown of Argao farther south, admiring the weathered mansions along the highway,  but I’ve only explored it once before. I recently revisited the heritage town on a photowalk to document its heritage structures. This gateway to the south derived its name from tree-climbing ferns called kabkab that once marked the crossroad to other towns. Known for its booming shoe making industry (the town is home to the uncredited largest shoe in the world) and mouth-watering delicacies, it also boasts of well-preserved historical buildings characterized by ornate woodwork. 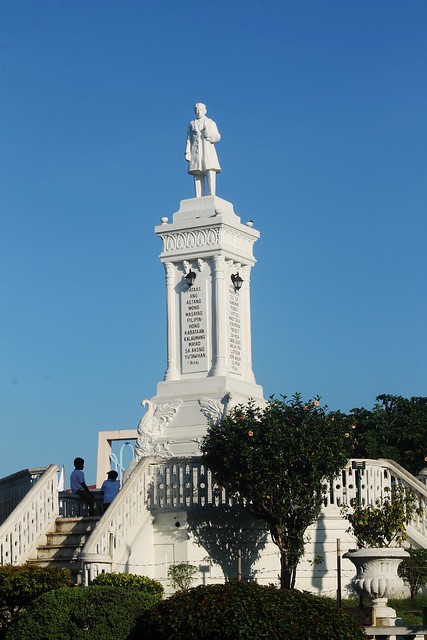 A statue of Jose Rizal stands in the center of the town plaza. 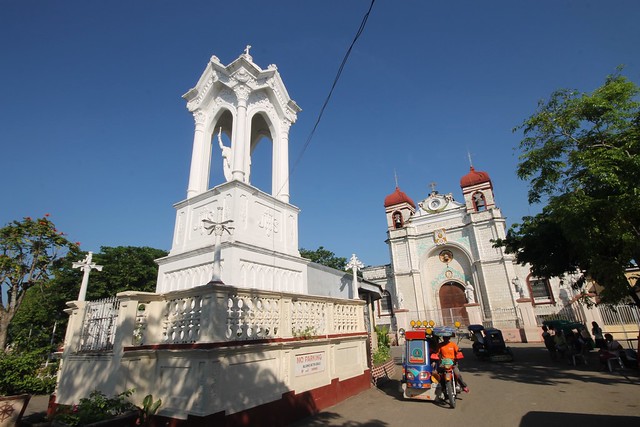 The Christ the King Statue was made by Italian sculptor, Dante Giudetti 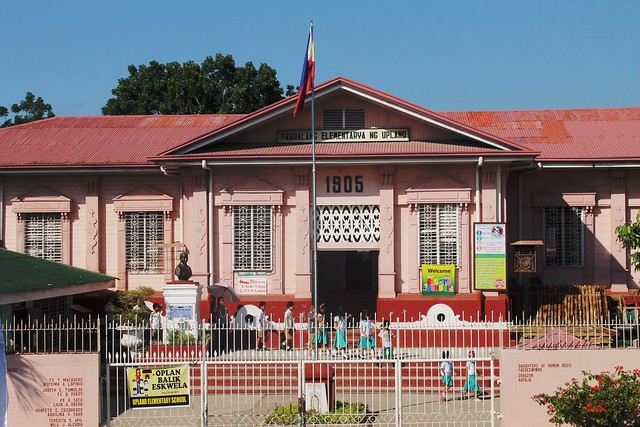 Upland Elementary School was built in 1905. 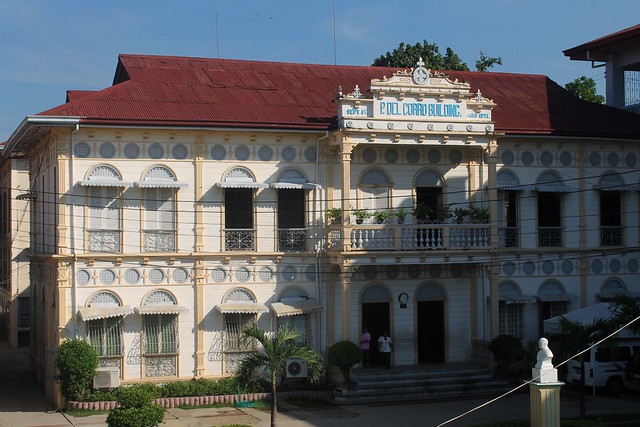 The P. del Corro Building of St. Catherine’s College was built in 1921.

Taking a public bus from Cebu City, I alighted near the junction to the town plaza built on top of a hill.  A Jose Rizal Monument stands in the middle with the national hero’s words inscribed in Cebuano. It is surrounded by the Spanish-period church and convent and outstanding examples of American civic architecture. 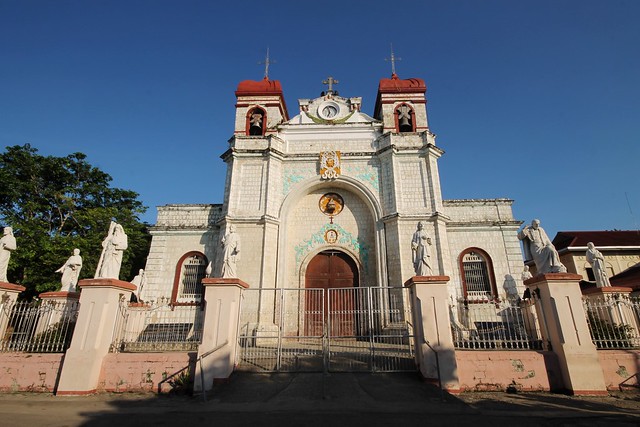 The Church of Saint Catherine of Alexandria incorporates Greco-Tuscan and Moorish architectural styles. 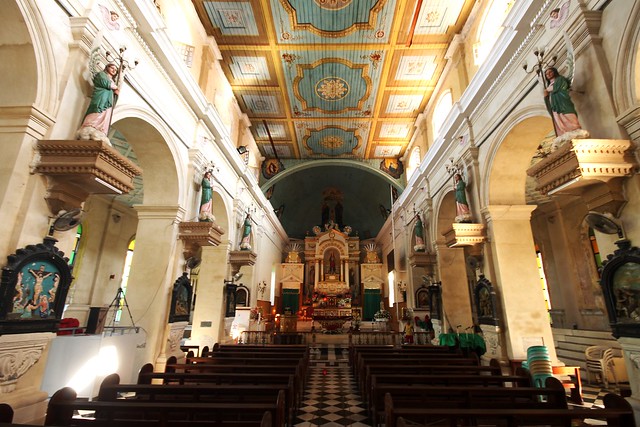 The nave of the town church is flanked by statues of angels. 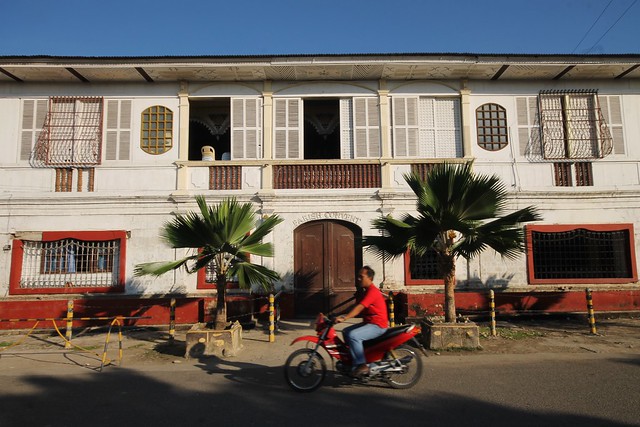 The Parish Convent of Carcar is one of the oldest in Cebu.

The Church of Saint Catherine of Alexandria dominates the area. Built from 1860 to 1875, it exhibits unique architecture of a simple Greco-Truscan facade with a recently renovated timepiece and twin bell towers topped by Moorish onion-shaped domes. An elevated row of angels flank the nave inside, reminiscent of the female saints at the Church of St. Anne in Molo, Iloilo City. Trompe l’oeil frescos painted in the early 20th century decorate the ceiling. Fronting the church is the Christ the King Statue by Dante Guidetti (1881-1942), an elusive Italian sculptor who lived in Cebu in the 1930s (More about this sculptor here). Next to the church is the Parish Convent and Saint Catherine’s College (1921). Also located in the town plaza, the Upland Elementary School is another educational institution that dates back to 1905. 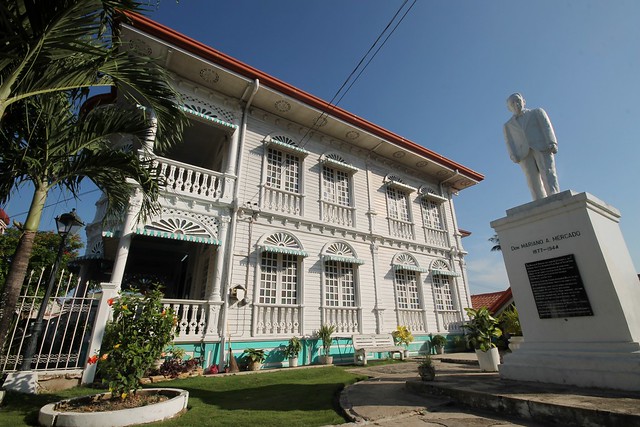 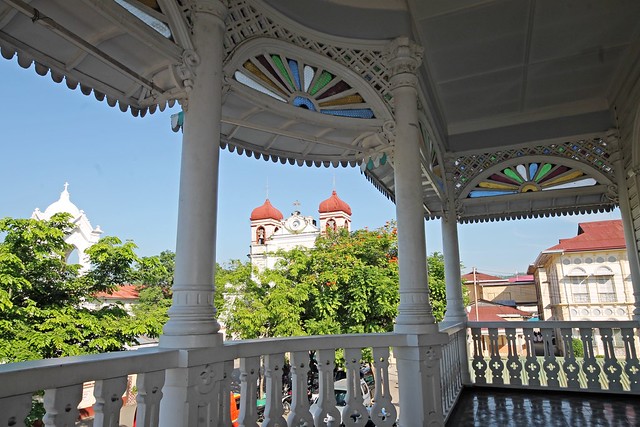 View of the town plaza from the second-floor veranda of the Carcar Dispensary.

The most eye-catching structure in the town plaza, however, is the Carcar Puericulture Center and Dispensary – one of the most beautiful examples of American civic architecture in the Philippines. Built from 1929 to 1937 under the leadership of Mayor Mariano Mercado (his statue stands next to the building), it’s a two-storey hospital for women and children.  Embellished with artful latticework, semicircular transoms and carved barandillas (railings), its resemblance to a doll house rather than a medical institution was perhaps meant to dispel the fears of the patients.  Since 2007, the Dispensary houses the Carcar City Museum (free entrance; open Mondays to Saturdays, 8:00 AM to 5:00 PM), which exhibits local artifacts, costumes and memorabilia of the town’s prominent artists and leaders. 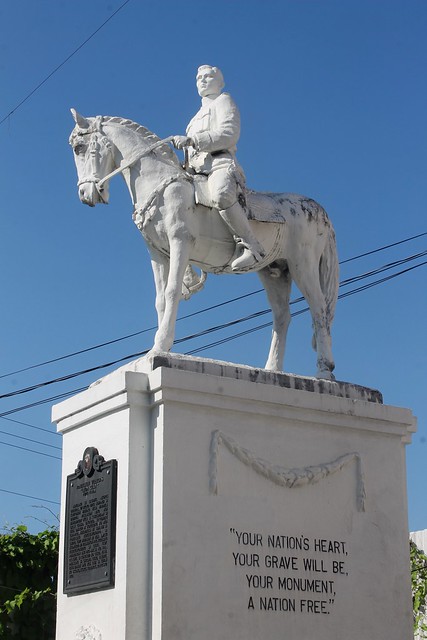 Pantaleon Villegas (aka Leon Kilat) was a revolutionary hero of Cebu. 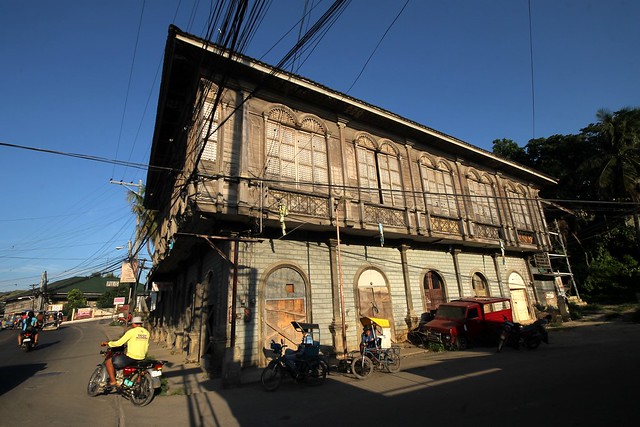 This “Heritage City of Cebu” has around 50 houses built from the mid 19th century to the early 20th century. Most of them are concentrated along Santa Catalina Street and the National Highway towards the Rotunda. From the town plaza, I walked back down to the highway where more prestigious colonial mansions stand.

At this corner stands a statue of a war hero on a horse. This man was Pantaleon Villegas – or more popularly known by his nom de guerre, Leon Kilat (Lightning Lion) – a Negros native who led the Philippine Revolution in Cebu. After leading the Tres de Abril Revolt in 1898, he fled to Carcar, where he was betrayed by his own aide-de-camp and prominent men in town who feared Spanish retaliation. At the age of only 24, he was brutally murdered in the mansion that stands right across the monument: the Barcenilla-Alcordo House – also known as the Jaen House or Sato House, architecturally the grandest colonial mansion in Carcar. Erected in 1959, the Leon Kilat Monument was designed by local sculptor Roman Sarmiento (1908-1974), who also made the Mercado monument next to the Dispensary.

Two other mansions along the highway were officially declared heritage houses by the National Historical Commission of the Philippines (NHCP) in 2010, namely the Mercado Mansion (1906) of former Mayor Mariano Mercado and the Silva House (built from 1883 to 1898). Next to the Silva House is the blue-and-white painted Yap House (1905), a replica of which became the example of Visayan colonial architecture at Nayong Pilipino, a former cultural park in Parañaque City. 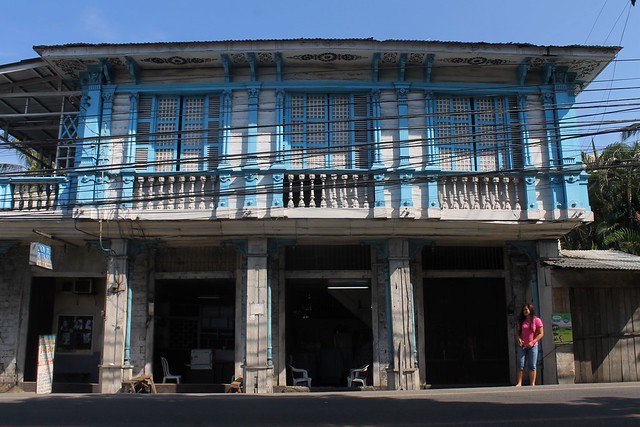 The Yap House is one of the ancestral mansions along the National Highway.

Crossing the highway from the town plaza will take you down Santa Catalina Street, a residential lane with more heritage homes. The most notable heritage structures on this side street also officially declared as heritage sites by NHCP are the Dakong Balay (1873) – literally “Big House” – or Florencio Noel House and the Balay na Tisa, a classic example of bahay na bato architecture. Also referred to as the Sarmiento-Osmeña House, the Balay na Tisa is the only house in Carcar sporting the original tisa or clay tile roof. Built in 1859, it is also the oldest house in Carcar. This heritage house accepts visitors by appointment only (Tel. +63 32 4875700). 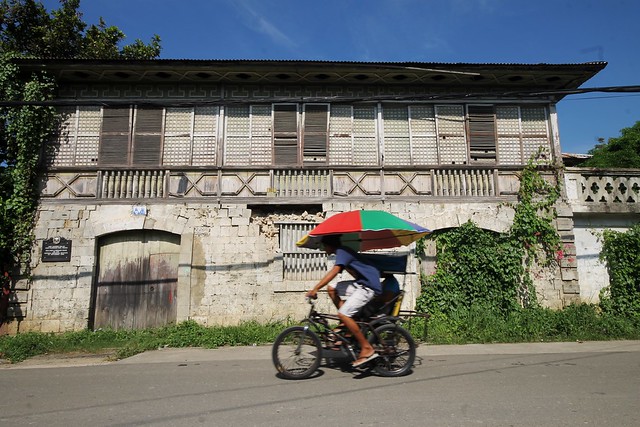 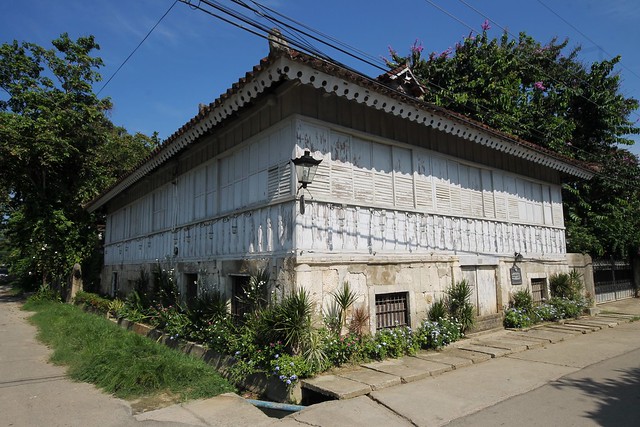 Built in 1859, Balay na Tisa (Sarmiento-Osmeña House) is the oldest house in Carcar.

The Rotunda and Public Market

I followed the highway southwards to the Carcar Rotunda, a roundabout built in the 1920s that serves as a crossroads for those heading farther south or to Barili and the southwest coast. The bandstand in the middle and the surrounding statues were sculpted by Dr. Ramon Abellana (1911-2001), a local sculptor and composer, based on sketches by his brother, renowned painter Martino Abellana (1914-1988). A sculpture of two women stands at the top of the bandstand symbolizes America showing the Philippines the way to prosperity.

Near this landmark is the Carcar Public Market, the perfect place to end my tour by sampling the town’s famous delicacies, especially lechon baboy (roasted pig) and chicharon (pork rind). Generously flavored with salt, garlic and lemongrass from crispy skin to juicy flesh, I find the lechon of Carcar to be the best-testing ever! Find the lechon stalls at the back of the market, where they can go as cheap as PHP 270 per kilo! The town is also known for sweet snacks like bucarillo (sugared coconut) and ampao (crispy rice bars) and gorgorias (egg biscuits). 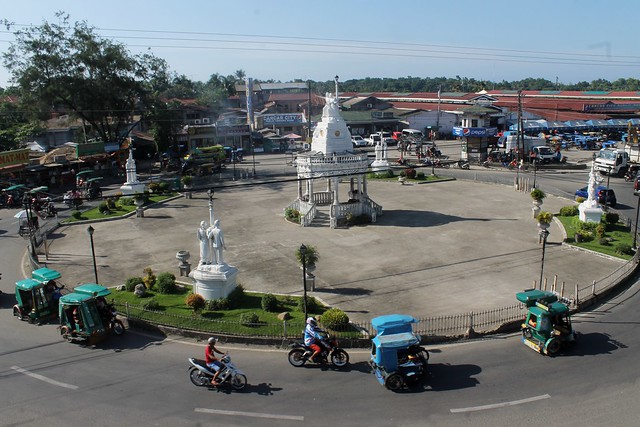 The Carcar Rotunda, built in the 1920s, marks a crossroad to towns farther south. 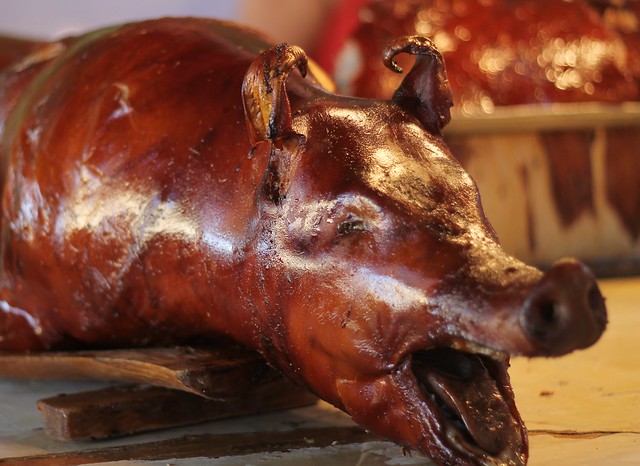 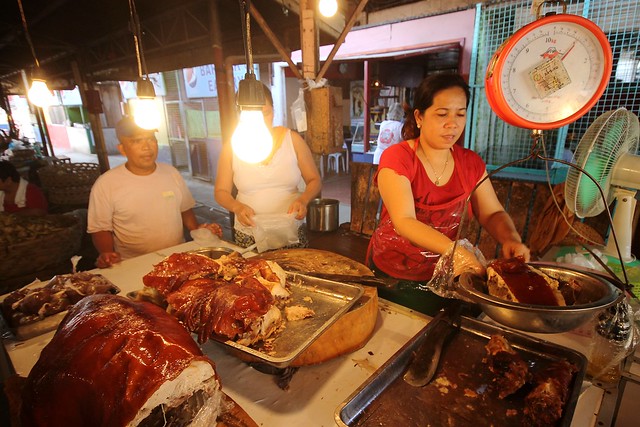 Carcar’s flavorful lechon can be as affordable as PHP 270 per kilo only!

Located 40 kilometers south of Cebu City, Carcar City is an hour’s ride from the South Bus Terminal by public bus (PHP 40 for non-AC). Take any of the southbound buses heading for the towns of Oslob or Barili. Ask the driver or conductor to drop you off at the junction to the church plaza, before the Carcar Rotunda. Short hops by tricycle around town are only PHP 8 per person.