After overnighting at Nagcarlan to explore the catacombs of the underground cemetery, my friend and I drove to Pagsanjan, via Liliw and Magdalena, for the town’s “shooting the rapids” whitewater canoe trips to Pagsanjan Falls, a popular day trip out of Metro Manila. I’ve long wanted to visit this famous waterfall. Together with Maria Cristina Falls in Iligan City, Pagsanjan Falls is one of the most famous waterfalls in the Philippines.

While the popular jumping off point is Pagsanjan town, the waterfalls itself belongs to the municipality of Cavinti. Alternatively, it is possible to hike to the waterfalls from the town of Cavinti (This is definitely a more affordable option, but you will miss out on the scenic gorge via Pagsanjan). There are billboards along the river that actually promote the cascade as Cavinti Falls, which hasn’t really caught on. 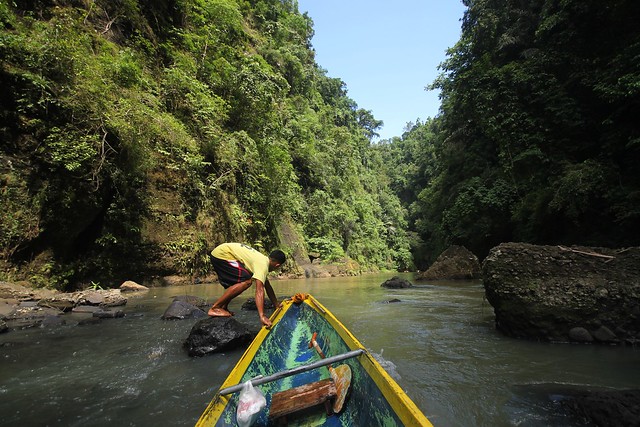 Whitewater canoe tours to Pagsanjan Falls have been around since the late 1800s! 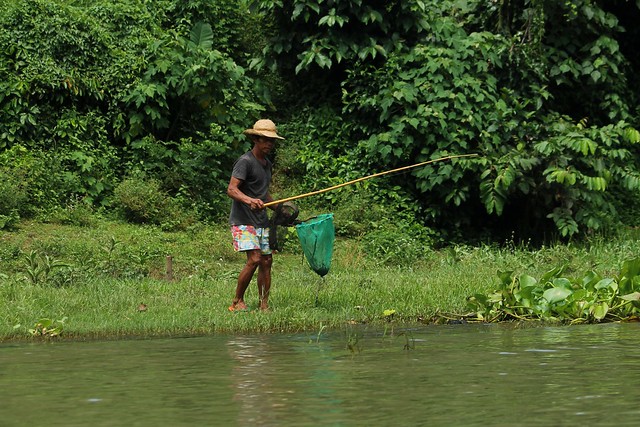 Villager fishing by the riverbank.

The Legend of Pagsanjan Falls

The waterfalls is also indigenously called Magdapio Falls, after one of the two brothers who, according to legend, lived along the river and later suffered from extreme drought. All the rivers and lakes dried up, and the animals disappeared. One of the brothers, Balubad, eventually died of thirst and his brother Magdapio buried him along the slope of a mountain, which was later named after the deceased one. The surviving brother went on an arduous hike inland in search for water, but discovered none. In anguish, he struck his big cane against the rocks, pleading the gods for water. Suddenly, a spring trickled forth from where he struck, which eventually became a booming cascade. Magdapio hurriedly drank the water and regained his strength. And life returned to his land. The water that emerged became the Pagsanjan Falls.

From the Pagsanjan Falls Lodge and Summer Resort, we traveled upriver along the Pagsanjan River aboard wooden canoes. Along the river, you could see residents go about their daily routine, traveling down river, old men fishing from the banks and children swimming in the olivine waters.  We entered through a beautiful river gorge, where, at some points of the ride, our boatman had to skillfully push or lift the boat over rocky shallows and guide our vessel across whitewater. There are over a dozen rapids that canoes have to surmount en route to the falls. This landscape has been gazetted as the Pagsanjan River Gorge National Park since 1939. 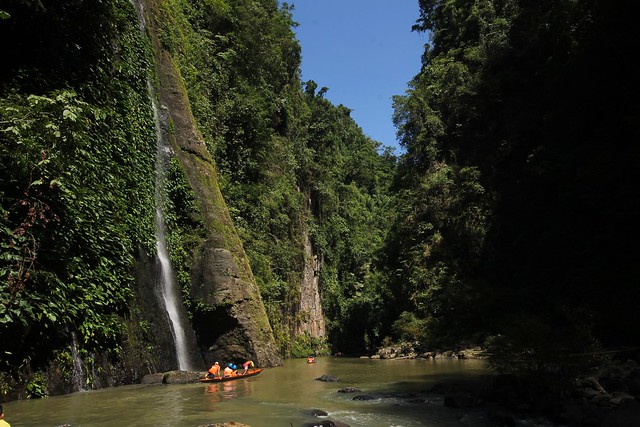 Talahib Falls flows down the gorge near a stopover point. 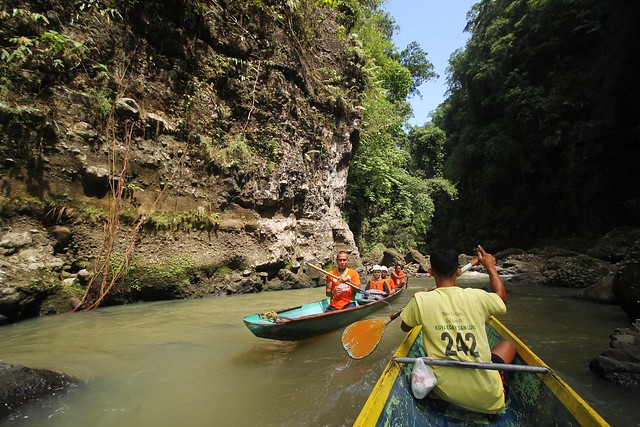 The one-hour canoe trip takes you through a scenic river gorge.

Halfway through the gorge is a resting area near a narrow waterfall called Talahib Falls streaming down the cliffside. At this stopover, there are locals selling snacks, drinks and even fried chicken! Our boatman told us he comes from a family who’s been guiding tourists to the falls for generations. “Shooting the rapids” to Pagsanjan Falls is one of the oldest tourism activities in the Philippines, having been offered to visitors since the late 1800s.

After nearly an hour traveling upriver, we alighted at the final destination: the Pagsanjan Falls, booming through a large crevice on a massive rock face. The famous falls is actually the third and final drop of a three-tiered cascade. The Pagsanjan Falls To truly feel the power and magnitude of the falls, we boarded a bamboo raft guided by a rope that took us right across a natural pool and through falling water into a depression behind the cascade called Devil’s Cave. Rafting through the falls felt like passing through a storm in the middle of the sea. It was a thrilling experience and an awesome finale to our adventurous journey upriver. 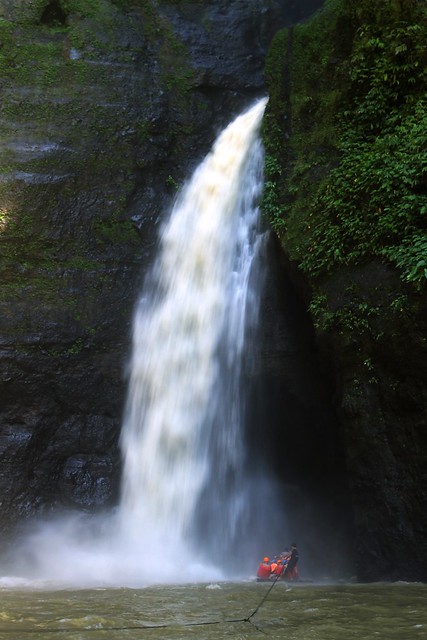 The booming cascade of Pagsanjan Falls – aka Magdapio or Cavinti Falls! 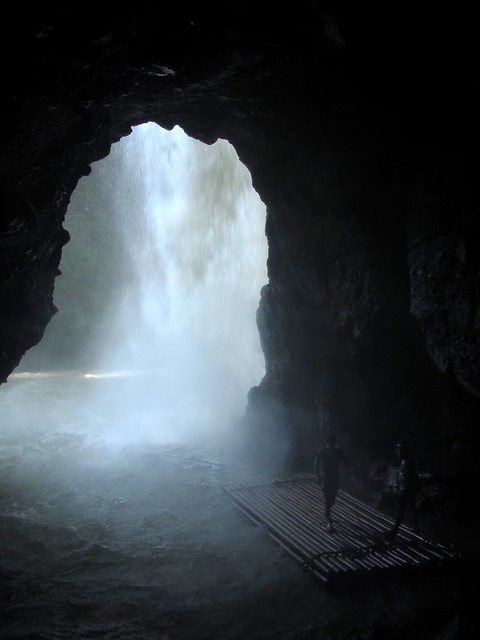 Ride a bamboo raft though the falls to a hidden cave.

Pagsanjan is roughly two or three hours south of Metro Manila. From the private bus terminals at Gil Puyat Avenue – Taft Avenue in Pasay City, take a bus to Santa Cruz, Laguna (PHP 148) where jeepneys can take you to Pagsanjan (PHP 10), five kilometers away.

For a list of accredited resorts that offer trips to Pagsanjan Falls, visit the well-staffed tourism office across the town church. The standard rate for the “shooting the rapids” canoe trip is PHP 1,250 per person, but resorts may charge a bit more for their entrance fees, which entitles you to use their amenities. As recommended by the tourism office, we opted for Pagsanjan Falls Lodge and Summer Resort which charges PHP 1,375 per person for their waterfall trips, inclusive of return boat trips, helmet, life vest, seat cushion and resort entrance, which gets you to use their changing rooms, lockers and swimming pool.

Beware of scammers who kindly offer to guide you to resorts and eventually persuade you to take overpriced canoe trips to the falls. They often flag down vehicles along the road, or approach tourists walking about town. It’s best to firmly but politely turn down any offer. To report cases of harassment, overpricing, forced tipping or any untoward incident, contact the tourist police at +63 49 8210166 or +63 49 8084054 or report at the Tourism Office near the town church.

Pagsanjan Falls Lodge and Summer Resort in Barangay Pinagsanjan is a popular choice for canoe trips but also has rooms for those who want to spend the night in town, starting at PHP 1,500 for A/C doubles. Find the best room rates here!