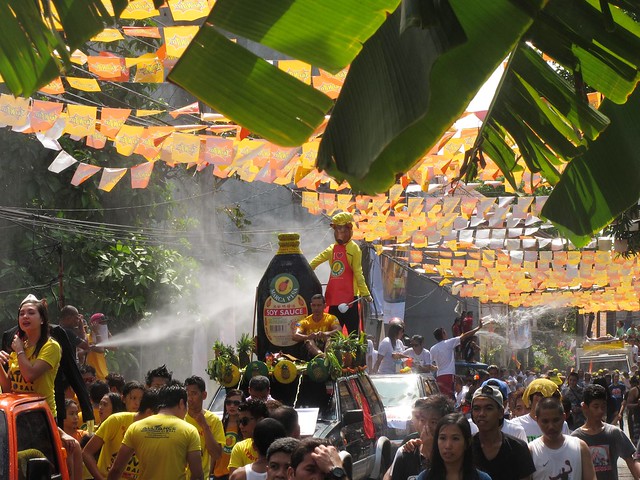 Parada ng Lechon, literally a parade of roasted pig, is the highlight of the Feast of St. John the Baptist in Balayan, Batangas.

“Hurry up, morning is coming!” a passenger seated across me appealed to the driver in a Tagalog inflected with the distinct Batangeño accent. It was half past four in the morning, and the sky was lighting up with the faintest glow of dawn.

My friends and I were crammed in a jeepney heading from Lemery to Balayan in Batangas province. Traveling with three other travel blogger friends, Doi of The Travelling Feet, Julius of Lakwatserong Tsinelas and Ruby of See Hear Explore, we barely had any sleep on our midnight bus ride from Pasay City. I had just arrived in Manila on a late night flight from Puerto Princesa to cover the culmination of the Baragatan Festival, and was now heading for another celebration, the Parada ng Lechon of Balayan. 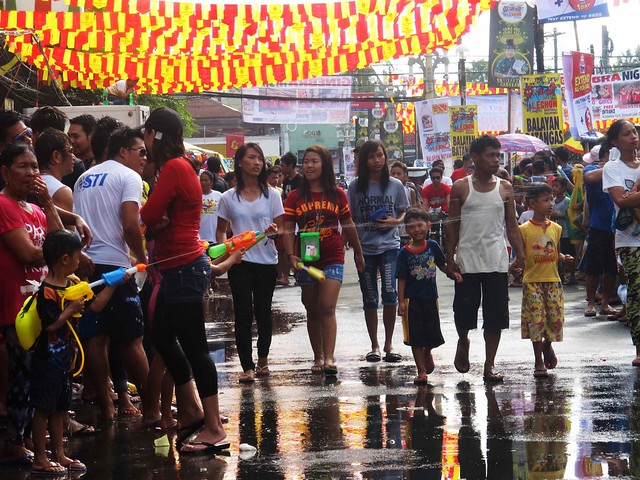 The feast of St. John the Baptist is traditionally celebrated by dousing people with water!

The vehicle was loaded with steel barrels of taho, trays of salted eggs, potted ornamental plants and the anxious hawkers taking them to town to sell. Our companions were not vampires terrified by sunlight, but wanted to stay clear of the impending merriment that comes with celebrating the feast day of St. John the Baptist, who is honored in Balayan – like the Philippine version of Thailand’s Songkran – by dousing everyone with water in a traditional practice called basaan! “We don’t want our goods to get wet,” explained the passenger, who wasn’t all too keen to join the festivities. 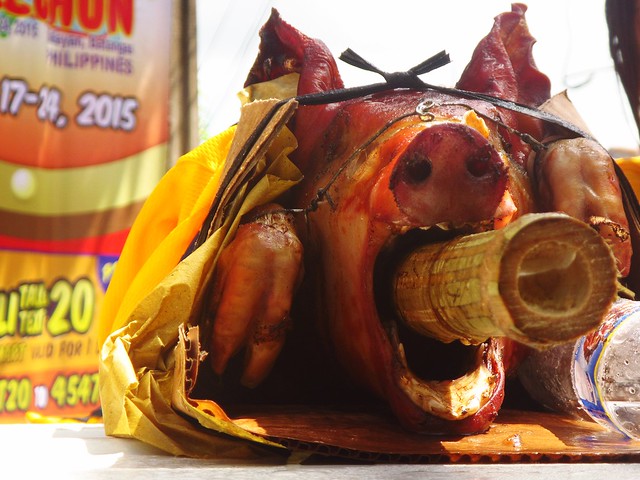 Thankfully, the town was waking up to the day of the festival and the dreaded mayhem hasn’t started when the jeepney dropped us off. We found an inn and took a nap to regain our energy. At 9:00 AM, we set out to join the parade.

As soon as I stepped out of the guesthouse, a young boy shot me with a water gun, giggling in delight. The fiesta of San Juan has begun! Even tricycle passengers weren’t spared from the water fight. As our tricycle drove past the subdivision, families were getting others wet with buckets of water, garden hoses and multicolored water guns. I was ready for the onslaught, armed with a prosumer camera in waterproof housing and my reliable Sea to Summit dry bag packpack. 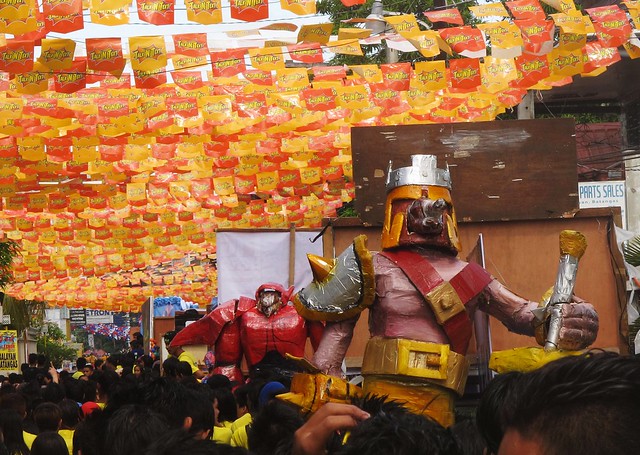 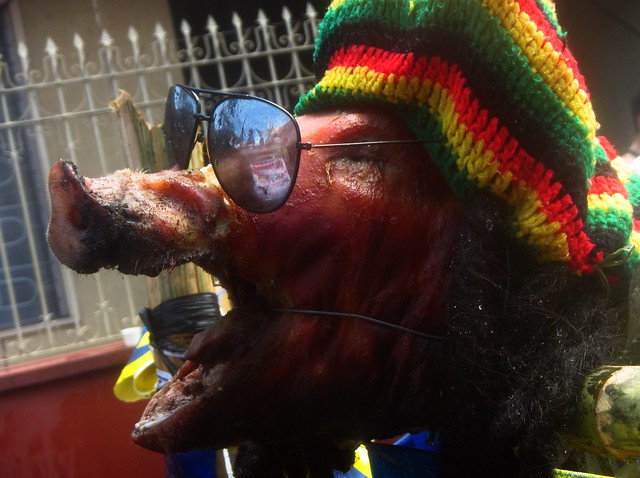 Besides the Songkran-like tradition, Balayan celebrates the feast day of St. John the Baptist with the Parada ng Lechon, literally “roast pig parade”, a festive procession of the Philippines’ iconic dish for special occasions. Walking against the flow of the parade, we immersed ourselves in the chaotic celebration.  A fire truck was hosing down a big crowd across the church. People were throwing buckets of water from rooftops and balconies, and more children played with water guns from the sidelines. Now and then, someone would sneak behind us to pour water – freezing cold from a cooler! – inside our shirts. After playing this prank on us, a group of men hanging out at a corner offered us lechon paksiw, a tangy stew made from leftover lechon, and white rice for breakfast, which we happily accepted.  Everyone was soaking wet, but all in the name of good fun! 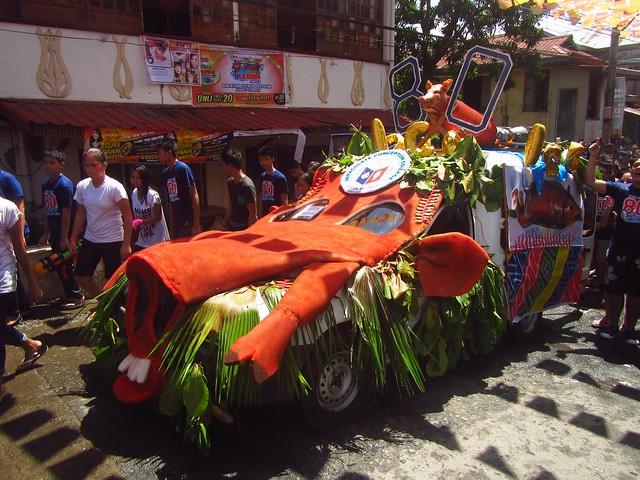 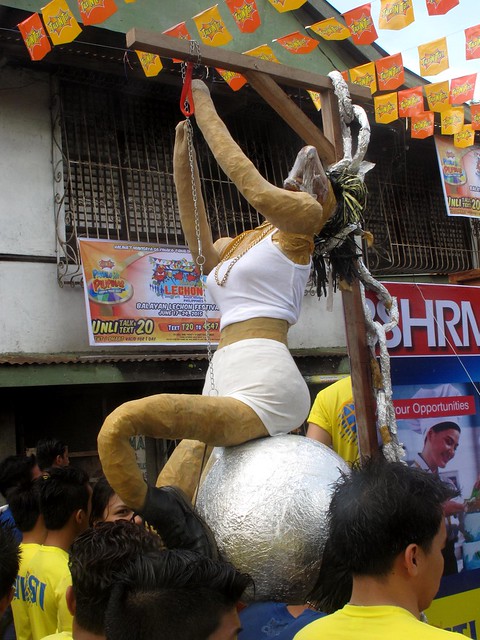 A lechon dressed as Miley Cyrus in “Wrecking Ball”?!

A steady procession of cars, trucks and tricycle topped with lechon rolled down the main street. Some of the whole roasted pigs on display were simply wrapped in transparent plastic to prevent them from getting wet, while others were humorously dressed in all sorts of costumes. The festival wasn’t as grandiose as others elsewhere in the country, but it was nonetheless one of the most fun ever. Where else can you get away not only with getting strangers soaking wet, but – in playful Filipino humor – parading roasted pig dressed as Bob Marley or Miley Cyrus in her Wrecking Ball music video?

Later in the day, we witnessed the religious aspects of the festival such as the luwa or religious declamation in honor of St. John the Baptist.

There are direct trips from Manila to Balayan, Batangas aboard San Agustin buses stationed at Pasay Rotonda. Alternatively, you can take any bus to Lipa City, then transfer to Balayan via Lemery by jeepney. Total travel time is around three hours.

We stayed at Espinelli Lodge (Tel. +63 9363897760), a lodging house located within the quiet residential area of Immaculate Conception Village, behind the town church.  An air-conditioned double room is PHP 600 every 12 hours. We were able to get a room as walk-in guests on the day of the festival, but I recommend booking in advance for peace of mind.

One Reply to “Parada ng Lechon 2015: The Wet, Wild and Weird Festival of Balayan, Batangas”