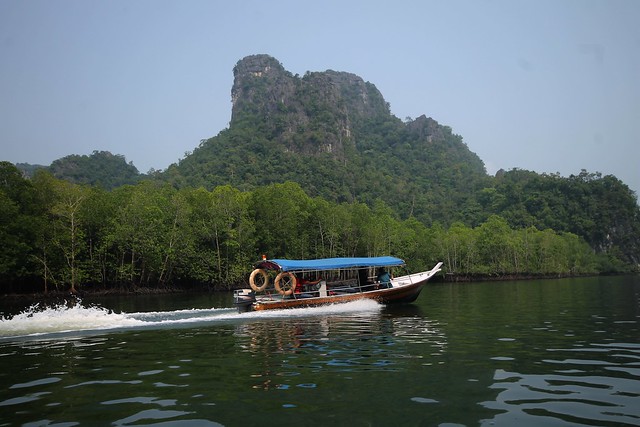 Langkawi has long been on my bucket list for its pristine beaches and forested landscapes, so I was extremely excited to make a side trip to the island courtesy of Gaya Travel Magazine and Kash Island Adventures, after attending a royal luncheon in Terengganu. From Kuala Lumpur, I flew to Penang to visit a friend, then rode the ferry a day after to Langkawi.

Magnificent karst formations characterize much of the landscape of Langkawi, an archipelago of over a hundred islands off the northwestern coast of Peninsular Malaysia, near Thailand. Declared a Global Geopark by UNESCO in 2007, the islands boasts of an outstanding geoheritage of stunning landscapes, limestone karst, sea arches and caves with a geological history dating back 550 million years. The Langkawi Geopark covers three separate parks, namely, the Machinchang Cambrian Geoforest Park, Dayang Bunting Marble Geoforest Park and Kilim Karst Geoforest Park.

Developed on the oldest limestone in the country, the Kilim Karst Geoforest Park is located on the northeast portion of the main island of Pulau Langkawi, featuring stunning pinnacles rising above an extensive mangrove forest that harbors an abundance of native fauna. Kash Island Adventures, one of the best travel agencies on the island, arranged a mangrove kayaking tour of the park with Dev’s Adventure Tours, which runs highly-recommended eco-friendly activities in Langkawi. 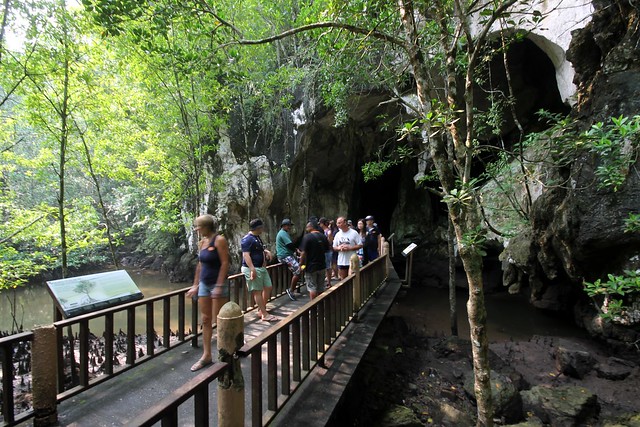 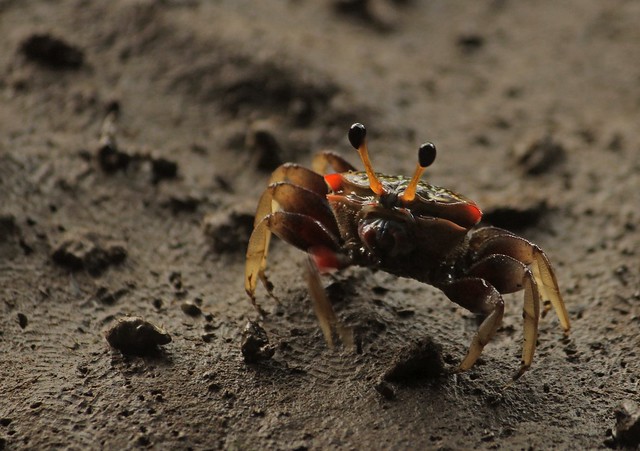 Unfortunately, my visit to Langkawi coincided with the worst season of the Indonesia haze caused by slash-and-burn farming and forest fires in Sumatra, thereby seriously affecting the visibility of the surroundings. Thankfully, the haze began to lighten on my third day on the island, just in time for my visit to the geopark. A van service fetched me at my guesthouse near Tengah Beach, and drove me to the park. I met up with Khirien Kamarudin – the most popular tour guide at Dev’s – and the other travelers joining the tour at the park entrance.

From the jetty, we boarded a speedboat to take us down the Kilim River to our first destination: Gua Kelawar (Bat Cave), a tunnel-like cavern that’s home to thousands of insect-eating bats hanging from the ceiling. A wooden footbridge provides convenient access to the cave. Khirien was an extremely knowlegeable guide, pointing out all the plants and animals and thoroughly explaining their biology and behavior. Inside the cave, I was drawn to the leaf-nosed bats that hung from the ceiling with their adorably grotesque noses! The footbridge continued out into the open through a thick mangrove forest, before turning into another cave entrance. 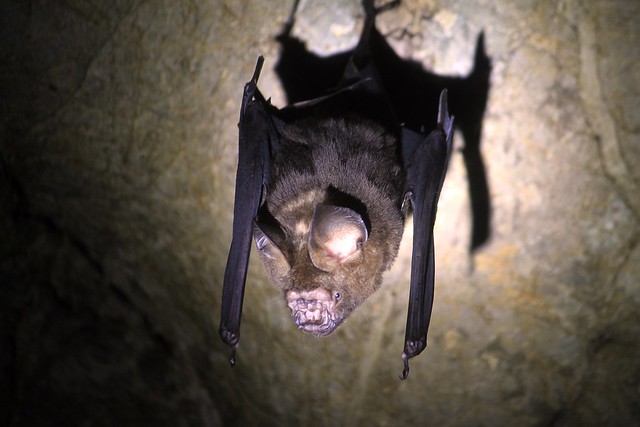 A leaf-nosed bat roosting on the ceiling of Gua Kelawar. 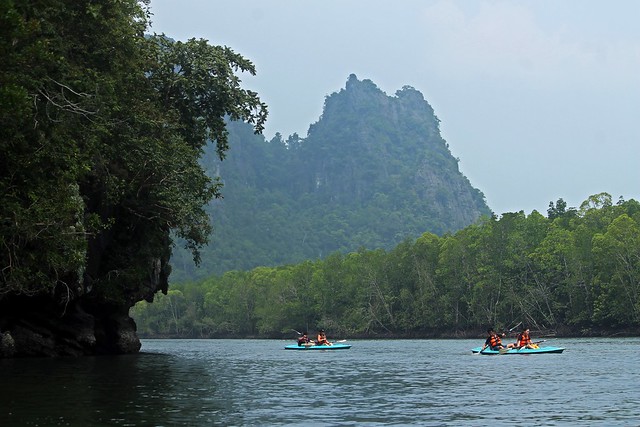 Exploring the mangrove channels by kayak.

We returned to the speedboat and, traveling through the mangrove-fringed karst landscape, reached a floating restaurant and fish farm, which served as our jump-off point for the kayaking tour. After a quick tour of the fish farm where we had the unique opportunity to hand-feed a big stingray, we hopped on our kayaks and began paddling down the brackish channel. Turning around a rocky bend covered with sharp oysters – a favorite food of long-tailed macaques  – we entered the territory of native birds of prey. 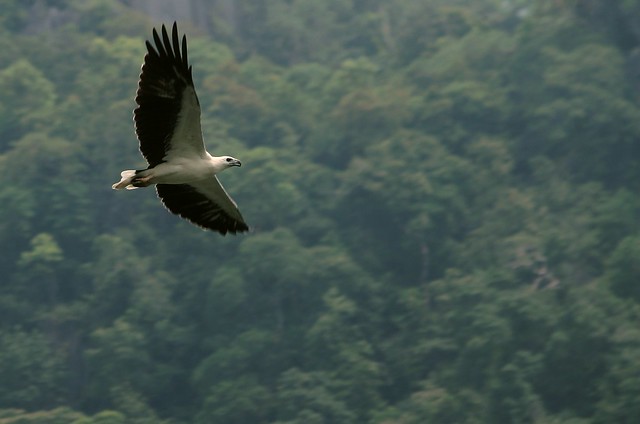 White-bellied sea eagle soaring above the water to hunt for fish. 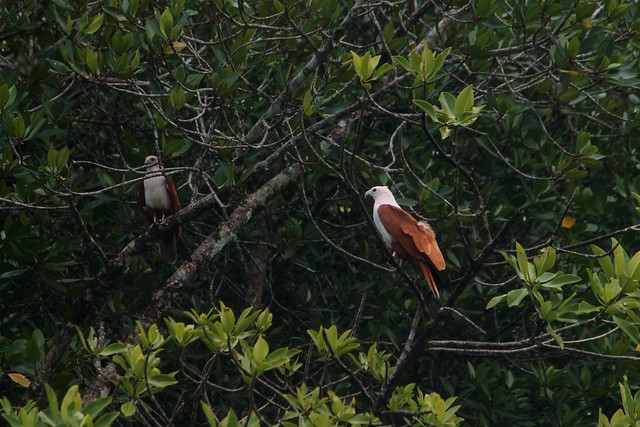 Following distant cries, we encountered flocks of white-bellied sea eagles and brahminy kites circling high above a speedboat conducting eagle-feeding tours, a practice which has been proven to be seriously detrimental since the chicken skin they are being fed can negatively affect their reproductive health. Moreover, the birds become dependent to these daily feeding tours, instead of hunting their natural prey of fish. Our guide strongly discourages patronizing these eagle-feeding tours and choose environmentally responsible operators like Dev’s. Brahminy kites are an iconic species of Langkawi; it is believed that these birds gave the island its name, which could be interpreted as “ochre-colored eagle.”

Since kayaking is quieter than taking a motorized boat, it’s an excellent way to spot wildlife. Besides the eagles soaring above or roosting on the canopies, we also spotted collared kingfishers, long-tailed macaques and monitor lizards patrolling the mangrove roots close to the shoreline. Entering narrower canals, we also searched for mangrove pit vipers, which are often spotted coiled up on a root system or low-hanging branches but unfortunately didn’t find any. Asian small-clawed otters can also be spotted on these kayaking tours. The spectacular karst landscape, pristine mangrove and variety of wildlife that we spotted definitely made this mangrove tour one of the best I’ve ever experienced! 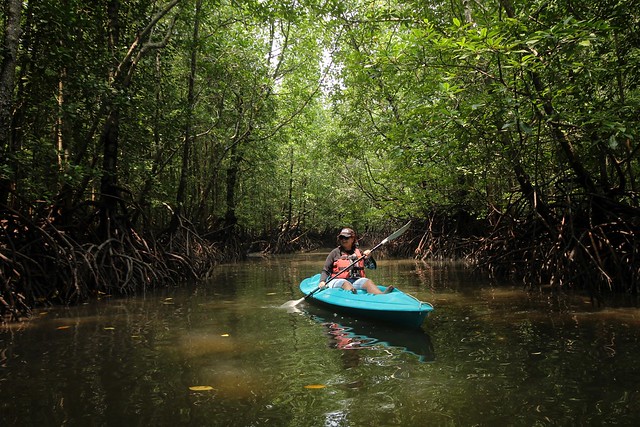 Kayaks allow you to explore the narrow canals of the park. 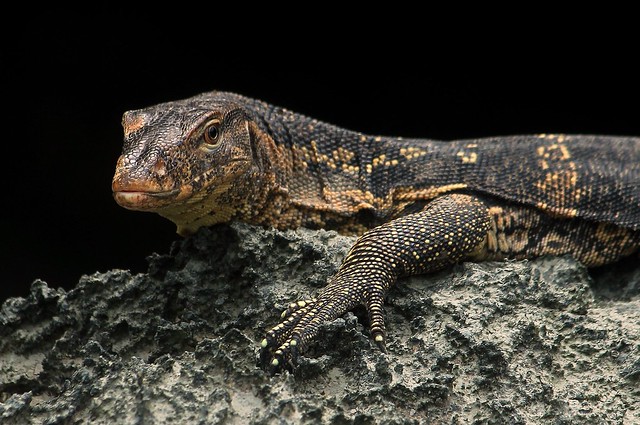 A monitor lizard basks on a limestone boulder.

For expert travel advice on Langkawi, contact Kash Island Adventures at +60 17 3940759. Special thanks to Gaya Travel Magazine for arranging my trip to Langkawi.