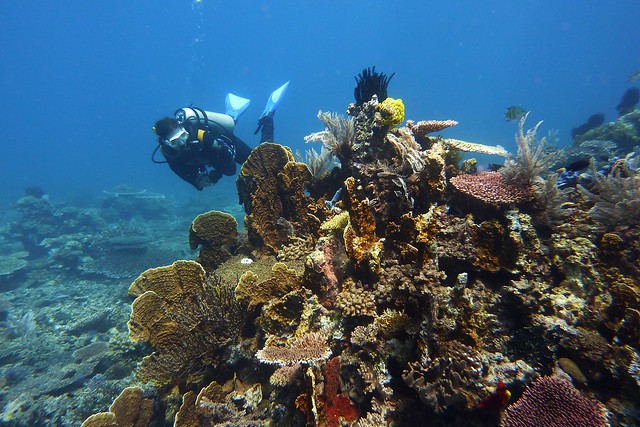 On our tour of northeast Puerto Princesa, one of the resorts we visited was Cooper’s Beach Resort. I was surprised to discover that they offered scuba diving in Honda Bay, as I’ve gone snorkeling a few times before on the popular island-hopping excursions to Pambato Reef and Luli Island, which left me unimpressed by the visibility, condition of the corals and variety of marine life found there. So I assumed long ago that Honda Bay doesn’t offer great diving, perhaps due to its proximity to urban areas in the provincial capital of Puerto Princesa. Honda Bay also doesn’t come up as a recommended diving destination in Palawan in diving guides and among friends who are into this recreational activity. When resort owners Frank and Lydia Kessner told me how incredible the reef dives are on this side of Honda Bay, I just had to take a look for myself. The German-owned beach and dive resort is the pioneering dive center in the area, offering dive trips around Honda Bay, which has a collection of nearly 40 dive sites – some of which were discovered and surveyed by the resort. Experienced divers have even compared a few of the reef systems in Honda Bay to the World Heritage-listed Tubbataha Reefs. 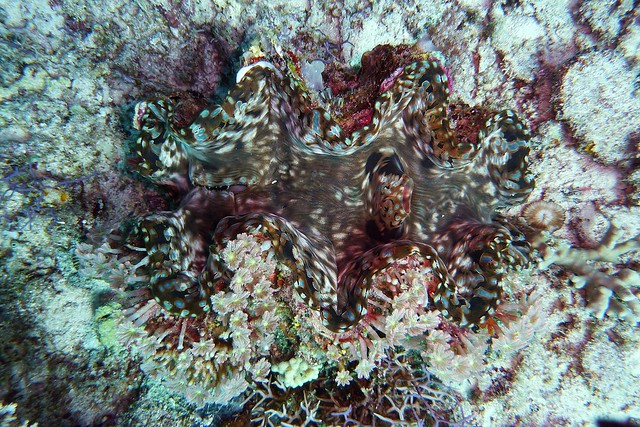 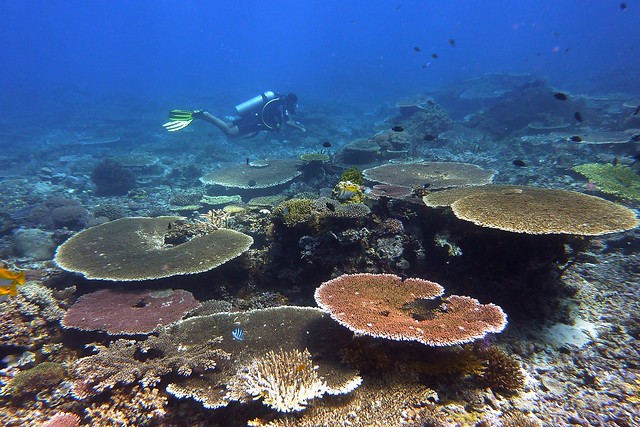 I joined their German guests for a couple of boat dives at Calaparan Reef, past Fondeado Island in the northern part of the bay. This is one of the reef systems in Honda Bay that was discovered and explored by the resort. One of the first things I noticed diving in Calaparan was how beautifully intact the hard corals were. This reef is an expansive plateau with well-preserved coral formations, consisting of both soft and hard corals – including fragile varieties like staghorn and table corals! While there were many colorful reef fish, our first dive yielded no significant animal sightings. Elsewhere in Palawan, particularly in El Nido and Cuyo Island, coral reef systems have been totally obliterated by cyanide and dynamite fishing. The coral reefs of Honda Bay are not protected from destructive methods either. During our dive, we spotted illegal fishing boats engaged in muro-ami, a destructive method of fishing employed across Southeast Asia, which involves using an encircling net fitted with pounding devices such as heavy stones or cement blocks designed to crush coral reefs and drive out fishes into the nets. The resort has reported these illegal activities to the city government, and if the local officials will not take immediate action, the coral reefs of Honda Bay will soon also meet its shameful demise. 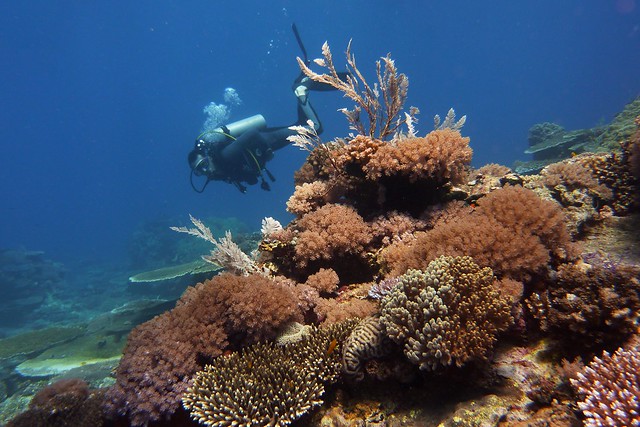 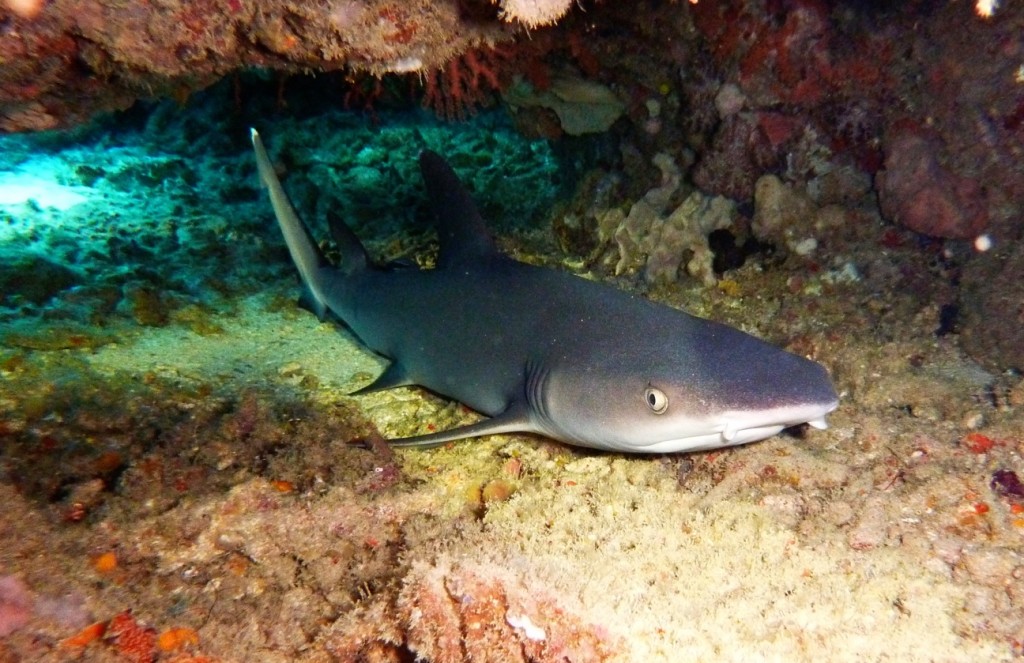 After resting on the boat for an hour, our group was ready for another dive at a farther portion of the same reef. It was evident early on during our second plunge that our group was in for treat. One of the dive masters immediately spotted a pair of whitetip reef sharks (Triaenodon obesus) resting inside a coral outcrop! Near threatened due to overfishing, this nonaggressive species spends most of its time during the day resting inside caves and under rocky ledges, and hunts at night for bony fishes, crustaceans and octopus. We spotted three more whitetips resting underneath another coral bommie, then  encountered other magnificent marine animals like stingrays, lobsters and cuttlefish.

Cooper’s Beach Resort offers discovery dives for first-timers at PHP 3,500 and fun dives for licensed scuba divers at PHP 2,000 per dive, inclusive of full gear and boat rental. For guests who wish to get licensed, they offer an SSI Open Water Course for PHP 18,500. 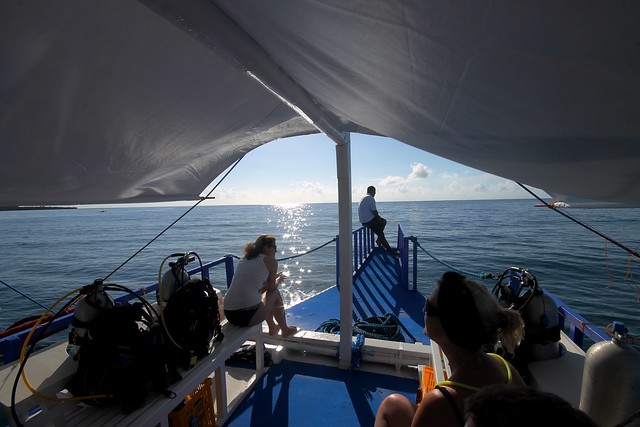 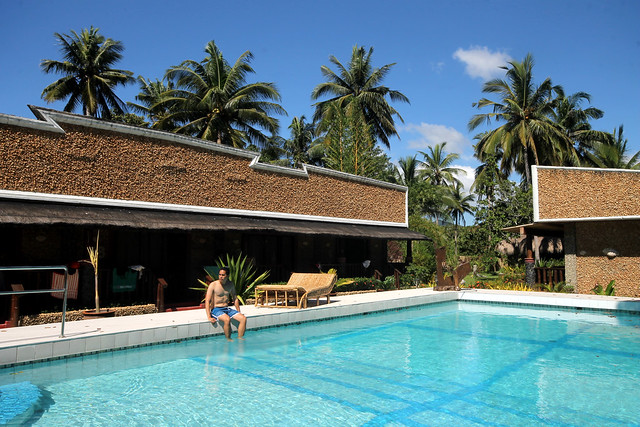 The resort has a 9-feet deep swimming pool that was designed not only for recreational swimming but for scuba diving lessons as well. The resort is equipped with their own dive center and dive boat, as well as their SSI-trained dive masters and instructors.

Breakfast buffets are included in their standard room rates. Their German specialties are schnitzels and sausages. I particularly enjoyed the carbonara pasta, too. The serving size of their a la carte dishes are huge, even for a person with a big appetite like myself! A single serving can be split for two, or enjoyed for two meals. What’s great about their food is that their pork, beef and poultry are sourced from the resort’s own private farm! 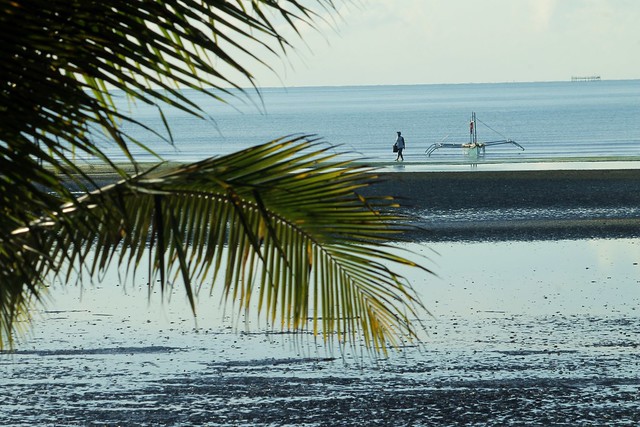 Take a northbound van, bus or jeepney at San Jose Terminal in Puerto Princesa city proper. Ask the driver to drop you off at the junction to the Cooper’s Beach Resort, located at KM 50 along the highway at Sitio Katumbal, Barangay Lucbuan (right after an Iglesia ni Cristo church). There’s a billboard advertising the resort at this junction. The resort is roughly 800 meters from the highway along an unpaved road. Walk, hire a tricycle or call the resort to request for free pick-up.  Travel time takes around an hour.

Fly to Puerto Princesa from Manila on Philippine Airlines – Your Home in the Sky!