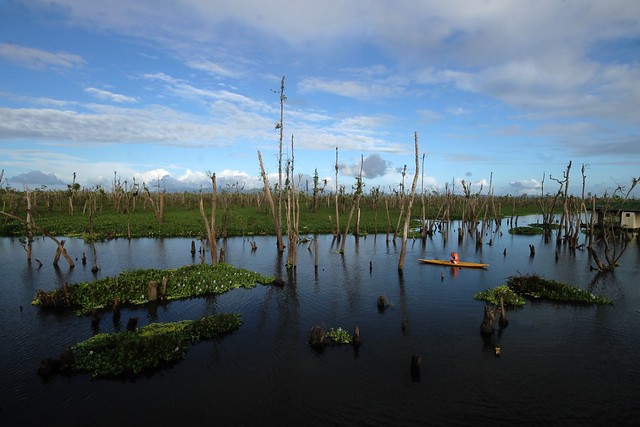 Roughly the size of Metro Manila, the Agusan Marsh in eastern Mindanao is the largest wetland in the Philippines.

When heritage advocate Ivan Henares invited me to revisit the Agusan Marsh to document a fledgling cultural tourism project he spearheaded, I excitedly jumped at the opportunity to experience this vast and unique landscape all over again. My first visit was with my sister in December 2009. We were the first tourists permitted by the town officials of Bunawan to enter Lake Mihaba – the site of a macabre crocodile attack on a Manobo schoolgirl eight months earlier. Apparently, the killer croc – presumed by many to be the 20-foot Lolong, the world’s largest captive crocodile captured in 2011 – was still lurking in the area. It was an unnerving yet exciting experience, paddling around the lake in a tiny baroto (canoe), merely a speck in what’s considered the country’s largest wetland that’s roughly the size of Metro Manila. As a matter of fact, the Agusan Marsh is so massive it harbors 15 % of the country’s freshwater! 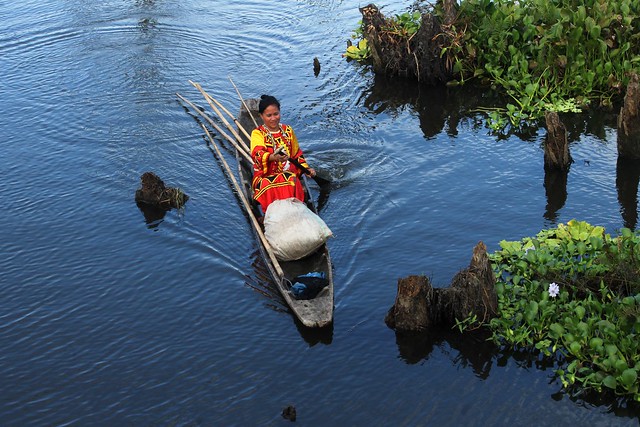 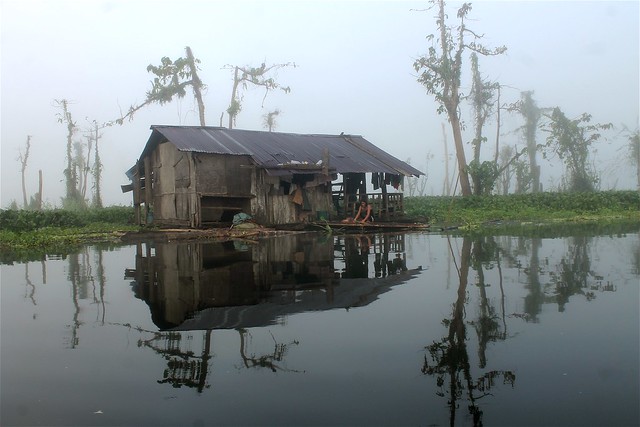 The Agusanon Manobo live in floating houses that adjust to the water levels of the marsh.

This time around I was looking forward to visiting another area farther into marsh and spending the night in a Manobo village. Just as in my previous trip, our small group alighted in Bunawan town, after a three-hour drive in a private van from Davao airport. After traveling two hours up the river, our boat suddenly veered right into a creek. We followed this narrow waterway flanked by tall cogon grass for nearly an hour before the landscape opened up into Lake Kanimbaylan, one of the 56 lakes in this marshland, fringed by water hyacinths with lavender flowers. Poking through endless beds of water plants were skeletons of trees cloaked in creepers, remnants of an inundated forest brought about by shifting water levels. The marsh exuded an otherworldly beauty of its own.

Anchored along the lakeside were clusters of floating houses of wood and thatch, homes of the Agusanon Manobo, the indigenous people of the swamp who have cleverly adapted to this watery domain for thousands of years. They live in dwellings that aren’t supported by stilts but actually float on the lake’s surface, adjusting to the seasonal rise and ebb of the lake’s waters. As our canoe approached the floating guesthouse, the villagers welcomed our group with merry songs and dances. The Panlabuhan Floating Village was established as a new eco-cultural destination through the aid of people’s organization Tuklas Katutubo, heritage advocate Ivan Henares and funding from the US Embassy in Manila. Over the course of five years, the program was developed with the objective of reviving tribal culture through responsible and sustainable eco-cultural tourism. 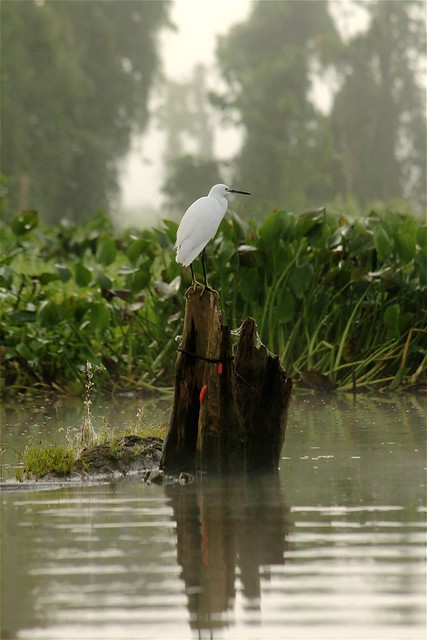 The Agusan Marsh is a prime birdwatching destination, with more than 200 avian species! 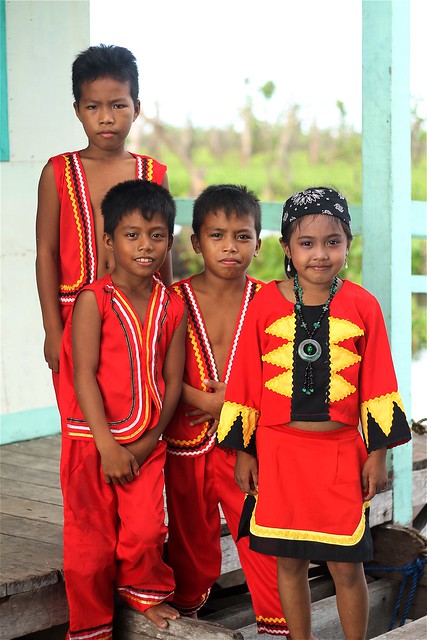 More than 4,000 indigenous Agusanon Manobo people live in Agusan Marsh, which has been declared not only a protected area for wildlife but also the ancestral domain of its indigenous inhabitants. Unfortunately, the tranquil watery world of the Manobos continue to be threatened by illegal logging, poaching and land grabbing. “Before, we feared all outsiders but now we have come to realize that others mean well,” said tribal leader Datu Remy Reyes, as he expressed gratitude for the introduction of the tourism program. Urbanization and evangelization has also taken a toll on their culture, as traditional beliefs and practices fade away. At Panlabuhan, the community has regained their knowledge of tribal songs and dances through training programs conducted to prepare the community to receive visitors.

A welcome ritual was performed by the village babaylan or shaman, who prayed over offerings of coins, sweets and hard-boiled eggs, together with bottles of beer and orange soda. After asking the spirits of the marsh to keep us from harm, he asked us us to throw the coins into the lake as an offering and sip the glass of beer that was passed around for everyone. After the short ceremony, the women performed traditional dances that depicted shamanistic rituals and the daily activities of their people such as canoeing and fishing. 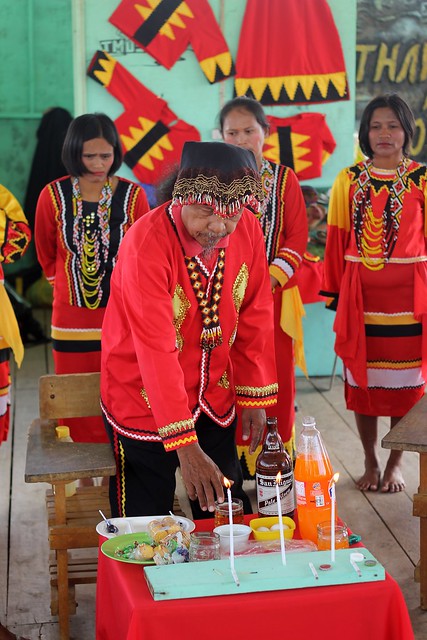 The village shaman performs a welcome ritual for our visit. 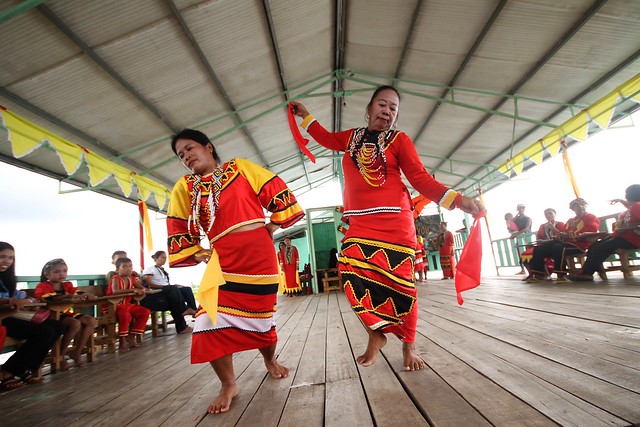 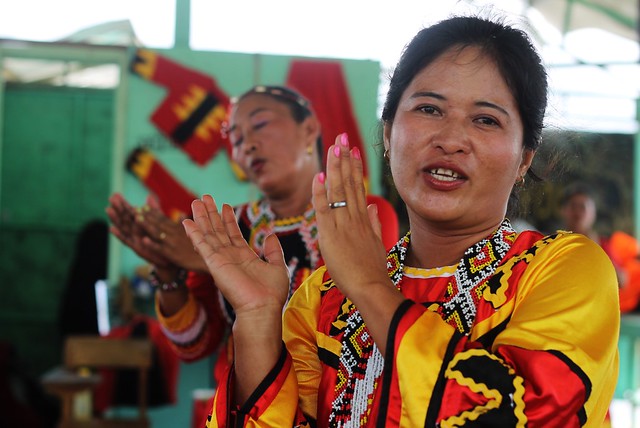 The Agusanon Manobo community of Panlabuhan has regained its indigenous skills and knowledge through the new tourism program.

Our dawn in Panlabuhan was enveloped in blinding fog, which reduced the landscape into subdued shadows like a Japanese ink painting. Marites Babanto, one of the village guides, offered to take me around the lake on a canoe. We slowly paddled to the middle of Lake Kanimbaylan, swallowed by the mist which obstructed the shoreline around us, transforming the lake into an eerily calm ocean with no land in sight. The rising sun softly glowed behind the impenetrable fog. Steering left, we soon approached a cluster of floating houses thinly veiled in mist, where villagers cheerily greeted our arrival. There were fishermen unloading their morning’s catch at a fishmonger’s house, and women weaving fishing nets on their porches. According to them, prized game fish here include tilapia, karpa (common carp), haluan (snakehead) and giant gourami. Here, a kilo of tilapia was only 40 pesos, but I was told they fetch more than double the price when sold at the public market in Bunawan town. 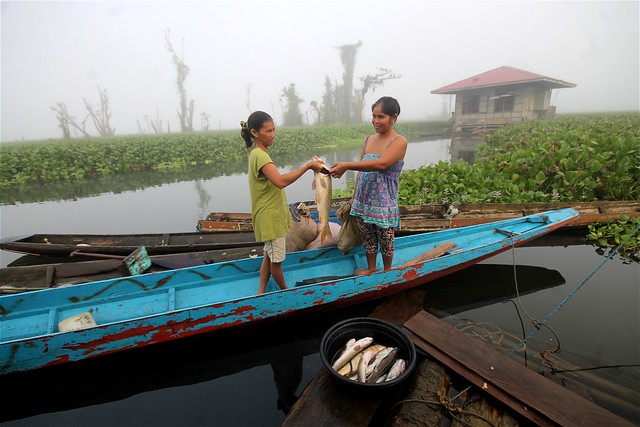 A villager peddles freshly caught carp around a community in Lake Kanimbaylan. 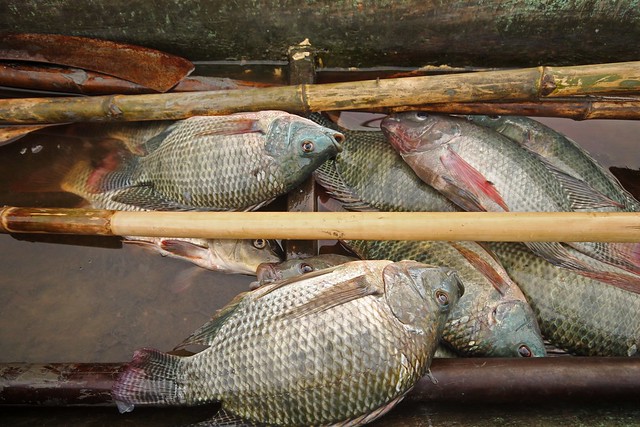 The Agusan Marsh harbors a bounty of edible freshwater fish like tilapia, carp, snakehead and gourami. 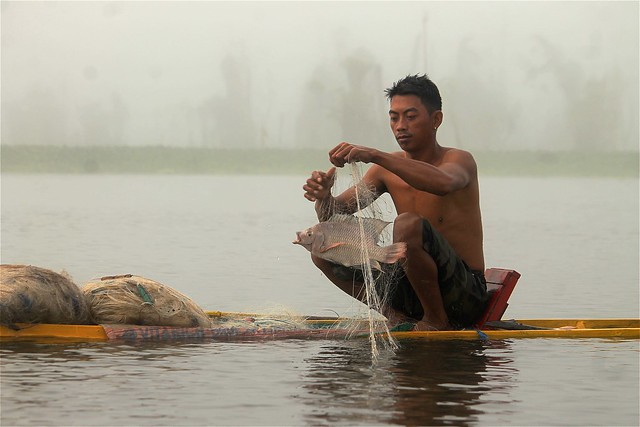 An Agusanon Manobo fisherman hauls in the morning’s catch.

While visitors often fear crocodiles on their visit, the villagers at Panlabuhan repeatedly assured me that sightings of these animals were rare as they often stay clear of human presence. According to tribal beliefs, rogue individuals who attack people were sent by angered nature spirits as revenge. What instead surely made their presence felt was all the birdlife. Besides freshwater fish, turtles and other reptiles, this wildlife sanctuary provides a refuge for more than 200 avian species, most of them migratory birds escaping the harsh winters of Russia and East Asia. On the day of our arrival, flocks of white egrets roosted on the trees as we entered the lake, and behind our floating guesthouse, we watched a solitary Philippine pygmy woodpecker (Picoides maculatus) – a species only found in the Philippines – working its beak on a nearby tree trunk. 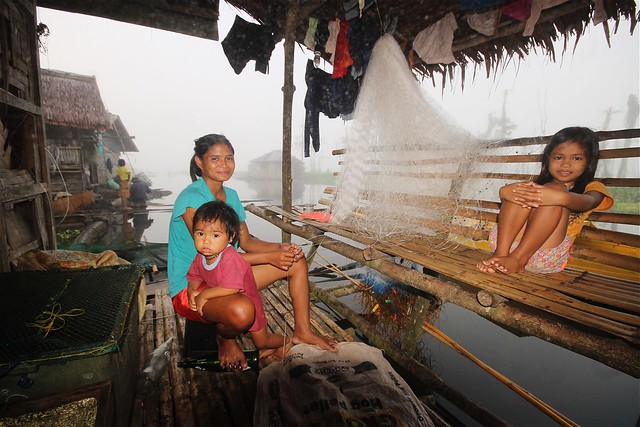 An Agusanon Manobo mother knits a fishing net alongside her children. 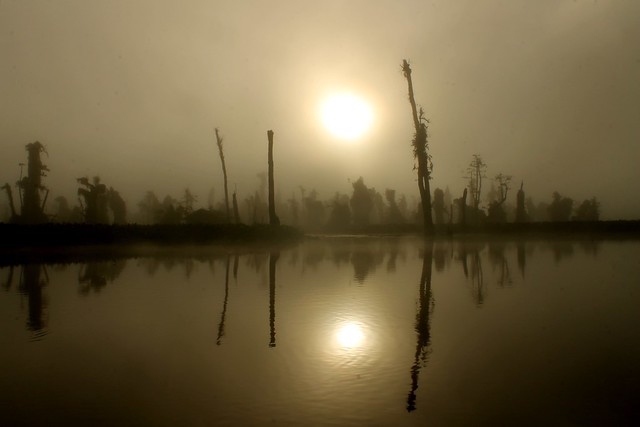 Our morning in Agusan Marsh was enveloped by eerie fog.

Before leaving, I wanted to tick off one last item on my travel bucket list: swim in a marsh. Emboldened by my peers, we paddled out on canoes to the deep part of the lake and jumped into water. The fog has completely dissipated by now, and the heat of the day intensified as noon approached. My fear of what lurked in the murky depths – man-eating crocs aside – were soon washed away by the refreshingly cool water and lively conversations in the middle of a marsh that I now appreciate beyond its outstanding scenery but as a vital watershed of vanishing culture.

Located along the National Highway linking the cities of Butuan and Davao, which is plied by frequent public buses, the town centers of Bunawan and Loreto in Agusan del Sur serve as entry points to the Agusan Marsh Wildlife Sanctuary. Located in Barangay Poblacion, Loreto, Panlabuhan Floating Village can be reached in three to four hours (depending on the water levels) by motorized canoe from Bunawan town, via the Bunawan River. The standard rate for a return trip is PHP 3,500 for a boat that can accommodate one to five passengers and PHP 5,000 for a larger boat for up to ten passengers. 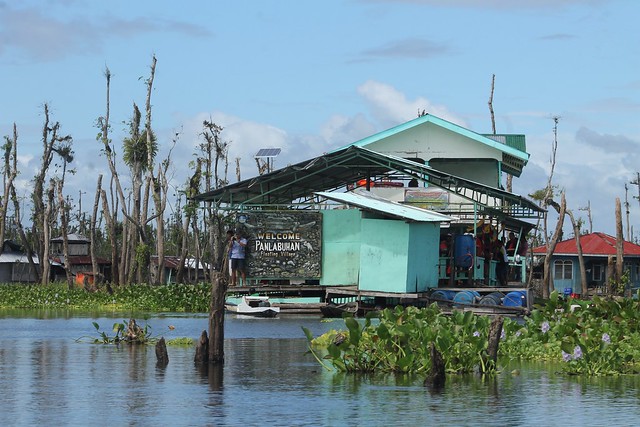 The floating guesthouse at Sitio Panlabuhan offers basic accommodation in the heart of Agusan Marsh.