6 Great Reasons Why You Should Visit Nan Province, Thailand 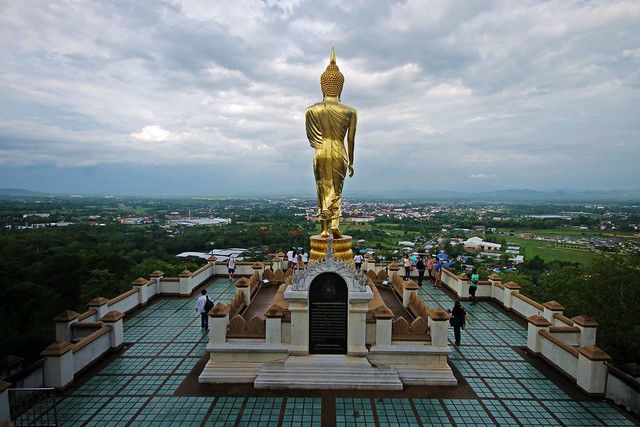 Panoramic view of Nan at Wat Phra That Khao Noi.

Off the radar of most travelers, the little-known province of Nan in northern Thailand offers a great alternative to touristy destinations like Chiang Mai and a more relaxing gateway for onward travels to the neighboring country of Laos. Situated along the Nan River, the provincial capital of the same name is located 668 km north of Bangkok, and can be reached in 10 hours by bus or an hour’s flight on AirAsia Thailand from Bangkok’s Don Mueang Airport. Here are six great reasons why you should visit this northern province:

As our AirAsia Thailand plane from Bangkok descended onto Nan after an hour’s flight, the first thing I noticed about this rural city was how lush and laid-back it was. As we approached the small but modern Nan Nakhon Airport, a quilt of rice fields lay below us stretching towards rolling mountains in the distance.  It was refreshingly worlds away from the urban sprawl of the Thai capital – and I loved it. One of the best spots to drink in panoramic views is the hilltop temple of Wat Phra That Khao Noi overlooking the city of Nan with a nine-meter tall golden Buddha lording over the view deck. Another great spot I really enjoyed to soak in the laid-back countryside vibe was Ban Thai Lue Cafe, a scenic roadside cafe serving native coffee with boardwalks over a garden of cat whiskers and lovely views of the nearby paddy fields. 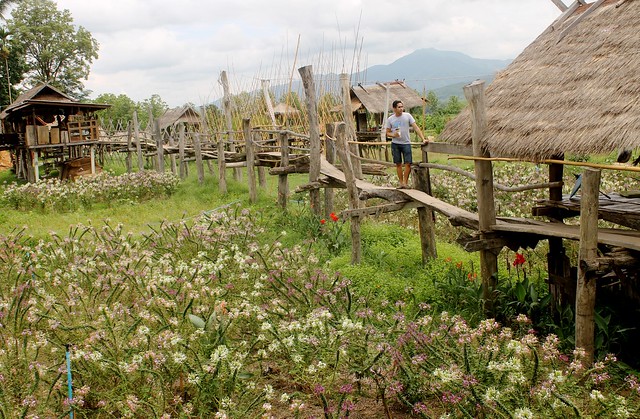 Ban Thai Lue Cafe is a roadside coffee shop in a countryside setting.

The city of Nan is best known for its temples, which make up for their relatively modest size with interiors brimming with beautiful murals. The 16th century royal temple of Wat Phumin at the city center is the top attraction, its inside walls covered in intriguing murals painted in 1867. They depict Buddhist beliefs and daily life of that time period including Tai Lü village scenes and the arrival of Westerners. Its most famous characters are “The Whispering” couple, which has achieved somewhat of an iconic status in Nan, having been depicted on souvenirs, signages and decor throughout the city. Another temple worth visiting for its equally captivating murals believed to be done by the same muralist is Wat Nong Bua built in 1862, located 40 km north of the city. 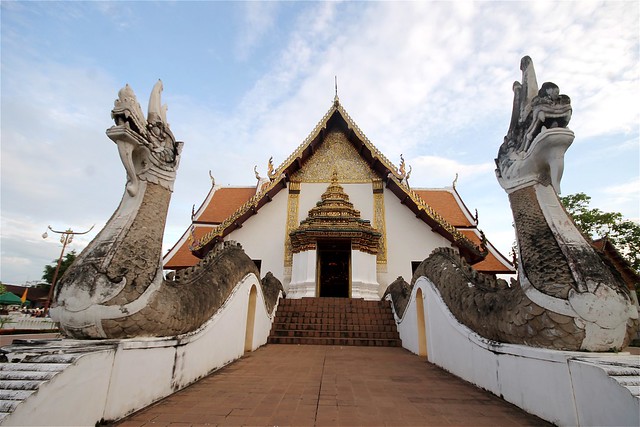 Wat Phumin is Nan’s most famous landmark built in the 16th century. 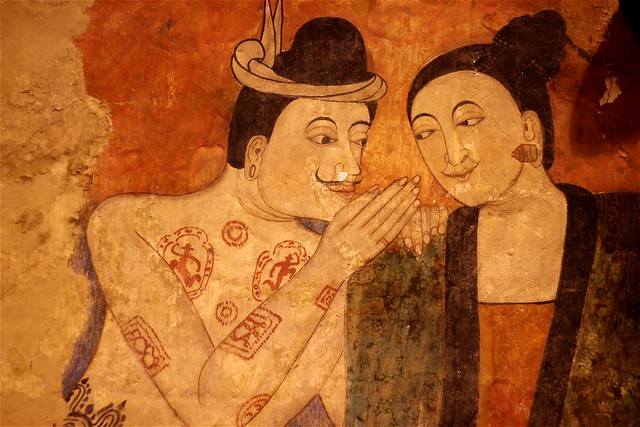 The intriguing mural of the whispering couple at Wat Phumin has become an icon of Nan.

With such beautiful countryside and historic artworks as the temple murals of Wat Phumin and Wat Nong Bua, it won’t be a surprise that Nan would inspire artistry amongst its people. Nan Riverside Art Gallery, 20 km north of the city, is the go-to place to admire the emerging local art scene. The largest private gallery in Nan founded by Thai artist and Nan native Winai Prabripoo, it functions as a contemporary art center to distribute and exhibit art works by local artists. As one wanders the exhibit spaces, one can easily decipher the influences to the local artworks. Standout pieces draw immensely from village life as well as the temple murals, particularly the iconic “The Whispering” couple of Wat Phumin. An adjacent exhibition hall has displays explaining the famous temple murals of Nan; it’s an essential visit for those who want a thorough understanding of Nan’s temple art. 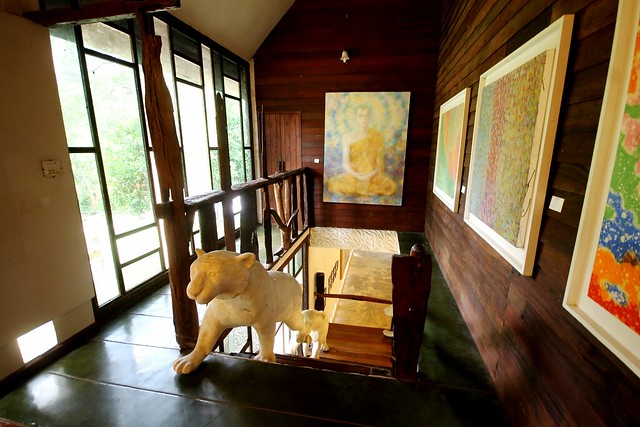 The Nan Riverside Art Gallery is the epicenter of the local art scene. 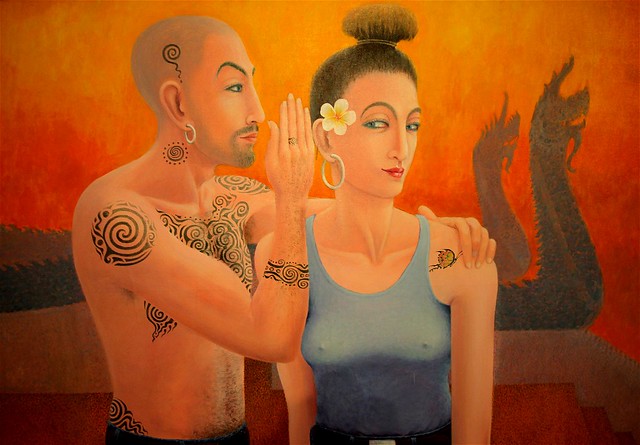 “Pu Farang Ya Farang” by Winai Prabripoo is a modern take on Nan’s iconic temple mural.

Of course, who would miss out on the food when traveling in Thailand! After all that sightseeing, it’s time to try out what Nan has to offer on the dinner table. The weekend market outside Wat Phumin offers some interesting fare like deep-fried crickets and Northern-style pot-roasted chicken. For a sit-down affair not far away from the temple, Hueanhom Restaurant specializes in Northern-style dishes like khao soi (Burmese-influenced noodle soup), khanom chin nam ngiao (rice noodles with pork blood sauce) and various types of fish curries. We enjoyed a generous spread of several dishes, but my favorite was the fried chicken wings with peppercorns and curry leaves. For those with a sweet tooth, all roads lead to Auntie Nim’s Dessert Shop (Raan Kong Wan Pa Nim) which serves a variety of khanom (Thai desserts) with coconut ice cream! If you’re traveling north of the city, check out Puapirom Bar & Restaurant, a roadside joint which served excellent Thai dishes as well – the chicken tom yum was stellar. 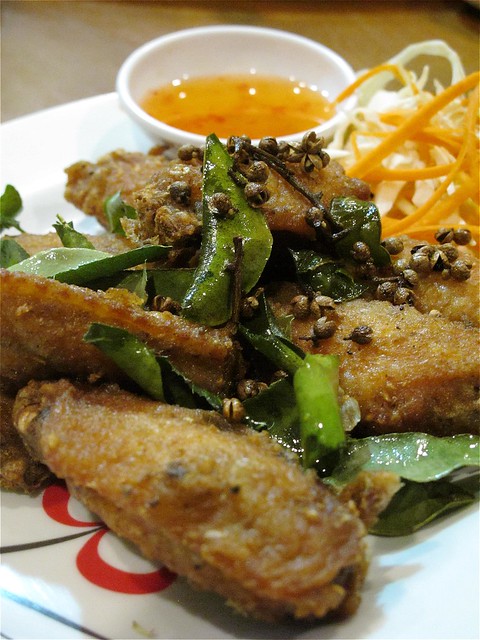 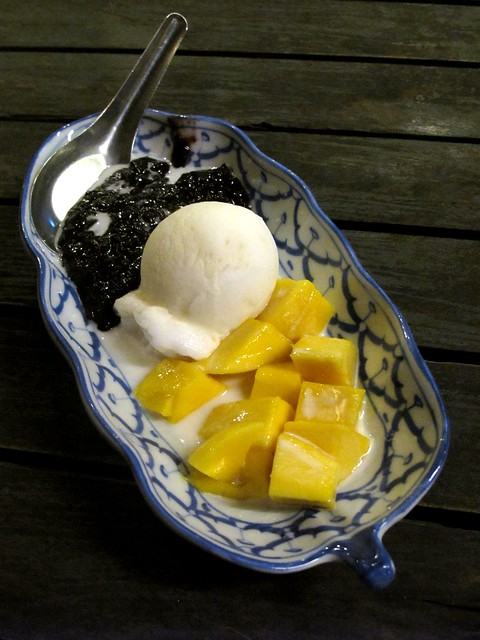 Admire the delicate craftsmanship of silversmithing.

As for handicraft making, the province of Nan is known for silverware. Rooted in the traditional wisdom of the Lu Mien (Yao) hill tribes who decorated their tribal wear with silver ornaments to express social status, the silver industry of Nan grown into a modern business with a number of factories producing all kinds of silver jewelry. decor and other articles. Doi Silver Factory, 61 km north of the city, had an impressive showroom of silverware and silver jewelry, including an ornate model of a traditional boat with naga serpent motifs which took two years to make. More fascinating than the finished product was witnessing how they were made at the factory behind the showroom, where workers – mostly women – toiled on shaping and welding together silver chains, bracelets and other items. 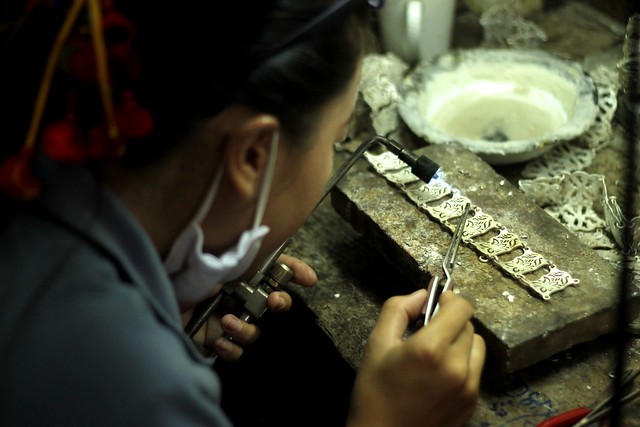 The tradition of silversmithing in Nan is rooted in indigenous culture.

Its proximity to Laos makes the province of Nan an alternative gateway to the country. The international border at Huai Kon – Muang Ngeun is only a two-hour drive north of the city of Nan. After exploring the province, one can easily continue your travels to northern Laos by traversing the border and continuing on to Pakbeng, where a scenic day cruise along the Mekong River can whisked you away to the famed UNESCO World Heritage City of Luang Prabang. 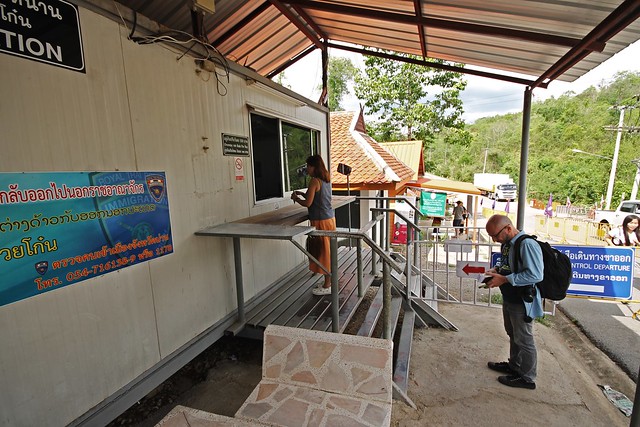 The Thailand-Laos border is less than three hours’ drive north of Nan city.

This blog post was made possible through the Nan-Luang Prabang Media Familiarization Tour from May 22 to 26, 2016, organized by Mekong Tourism. Special thanks to AirAsia Thailand for our Bangkok-Nan flight.