A Day Tour of the Most Beautiful Sights in Luang Prabang Town, Laos 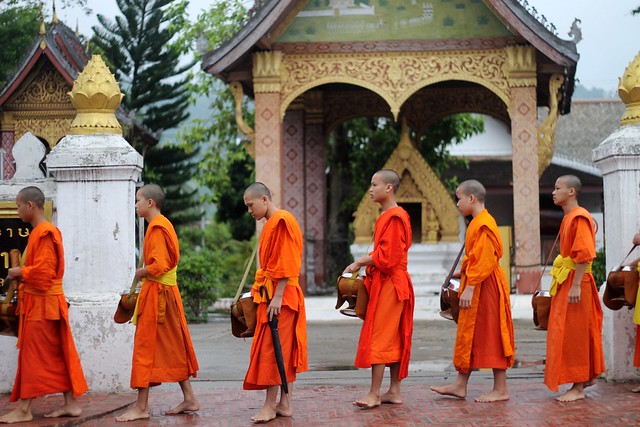 As soon as our cruise boat from Pakbeng docked at Luang Prabang after our scenic eight-hour journey down the Mekong, it was evident why travelers are drawn to this sleepy conglomeration at the confluence of two rivers in northern Laos. The former capital of Luang Prabang is a charming medley of French colonial buildings and Buddhist temple-monasteries, all cradled in a peaceful river valley. While this northern city has been declared a UNESO World Heritage Site in 1995, it has surprisingly retained its laid-back atmosphere, unlike other recognized cities in Southeast Asia like Penang, Hoi An and Vigan, which are bustling with much activity.

After a good night’s rest at Sofitel Luang Prabang. an elegant boutique resort built around the century-old former governor’s residence, we were ready to see the rest of the heritage town the following day. We toured around in a van, but the city is compact enough to be explored by walking or biking. (For those who want to embark on a DIY walking tour of the town’s historic core, I recommend getting a copy of A Walk through the Heritage of Luang Prabang by Francis Engelmann, published in December 2015 and available at selected hotels like Sofitel Luang Prabang.) 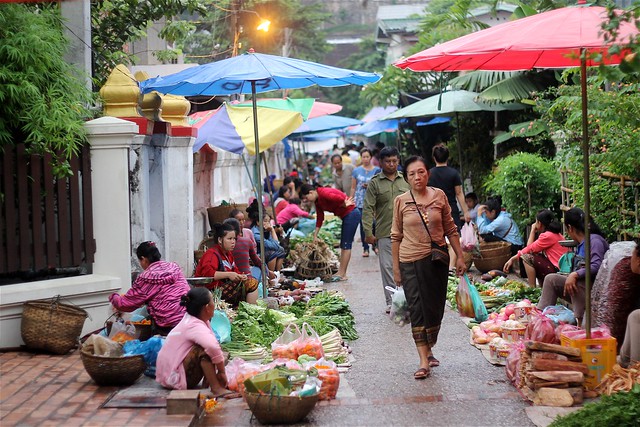 The morning market is a perfect glimpse of the city’s daily life. 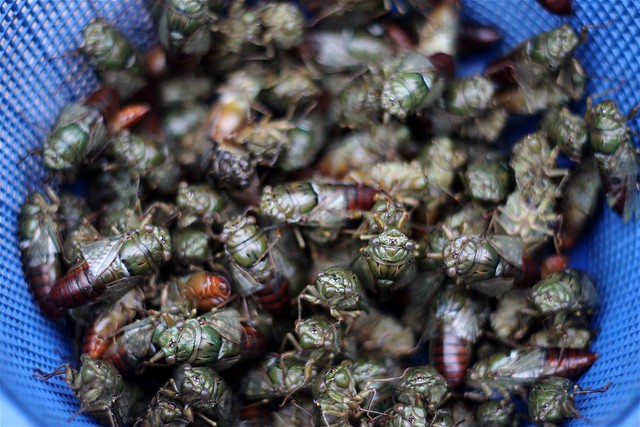 Cicadas for sale at the morning market. Best enjoyed fried, I am told.

Luang Prabang is an early riser. Accompanied by our local tour guide “Mr. Ken” (Tel. +8562059692967; Email: kenpersonal1984@gmail.com), we set out at 5:00 AM to witness the alms giving ceremony along the main thoroughfare in front of Wat Sop Sickaram. This dawn ritual of donating food and drinks to monks queuing around town is a living tradition that has also become a major tourist draw. Visitors are drawn to tranquil scenes of young monks asking for alms from residents seated along the sidewalk, against a backdrop of gilded wats. It is important though that tourists respect the solemnity of the occasion by keeping a polite distance from the monks and refrain from blocking their path when you’re taking photographs.

Besides the alms giving ceremony, another attraction worth rising up early for is the morning market squeezed into the alleys not far away from the Royal Palace Museum. It’s the perfect venue to get the sense of daily life in town. Vendors lay out the freshest harvest and catch along the sidewalks: Luang Prabang’s version of the supermarket with a cornucopia of fruits and vegetables and freshwater fish like tilapia and catfish. There also some peculiar finds such as live frogs and cicadas (“We enjoy them deep-fried,” Mr. Ken tells me), just to name of a few. 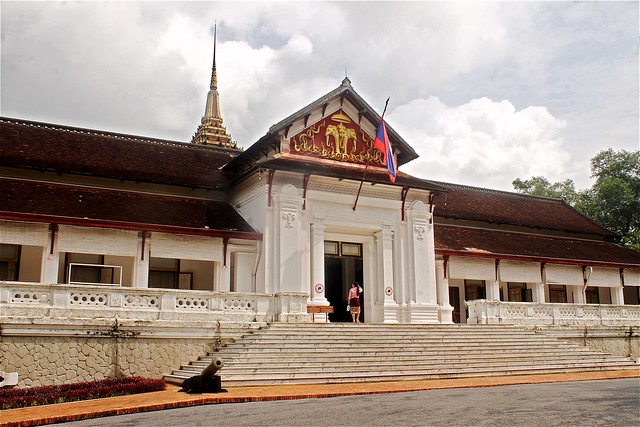 Now a national museum, the Royal Palace was built in 1904, a fusion of Lao and French architecture.

We returned to our hotel for breakfast, before setting out again mid-morning to continue our tour. It was time to visit the most popular attractions. Our next stop: the Royal Palace. Constructed in 1904 during the French occupation, the Royal Palace was the former residence of King Sisavang Vong and his family. It was built near the river to conveniently receive guests who travel to the city by boat. After the king’s death, the crown prince succeeded him. But in 1975, the communists overthrew the monarchy and later on converted the royal residence into a national museum.

Unfortunately, photography inside the museum is not permitted. And we had to deposit our belongings before entering. The treasures we found inside explained the security measures imposed. The most impressive room in the palace was the throne hall with walls covered in rainbow mosaics of colored glass depicting Lao folklore and village life. The room also contained the crown jewels and several artifacts in gold and silver. Before leaving the palace grounds, we dropped by Haw Pha Bang Temple, an ornate royal temple constructed from 1963 to 2006, which enshrines the 83-cm-tall Phra Bang Buddha – the most sacred and culturally significant image in all of Laos and also the holy relic that gave the city its name. 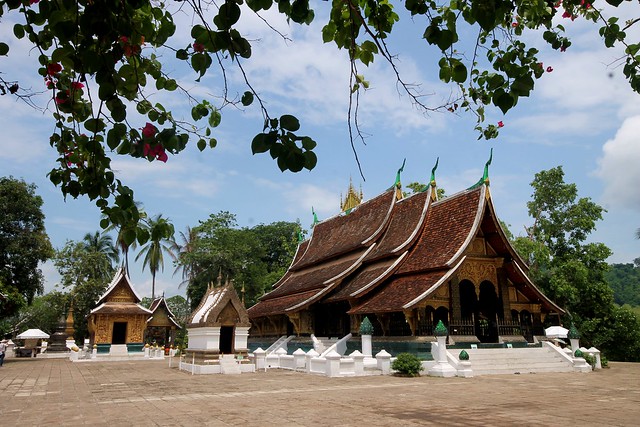 Wat Xieng Thong is the oldest and finest example of Lao temple architecture. 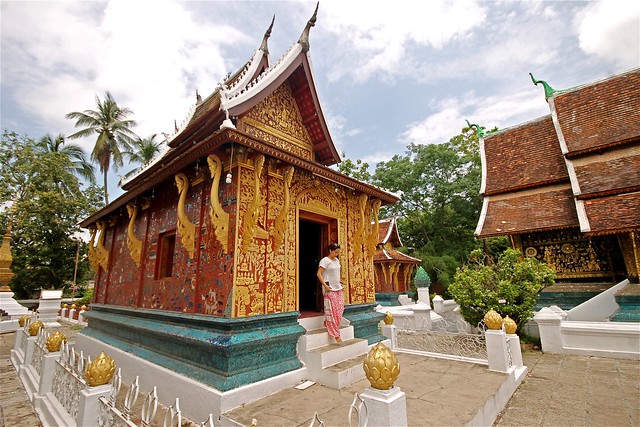 While relatively modest in size, Lao temples dazzle with their decorative details.

Farther up the road is Wat Xieng Thong – another must-see. While there may be several other wats or temple monasteries in Luang Prabang (33 to be exact), this one bears the distinction of being the city’s oldest and finest. It was built by the royal family in 1559, and was under their care until 1975. While modest in size when compared to other distinguished temples across Southeast Asia, the temple and pavilions of Wat Xieng Thong dazzle with its decor of glass mosaics, gold stencils, gilded ornately carved doors, teakwood panels and sweeping, layered roofs.

While the temple grounds may not that be that big, I could spend hours poring over the architectural details. But as noon approached, our stomachs grumbled, wanting to be fed some really good Lao cuisine, so off we went to one of the finest tables in town, Manda de Laos for their signature cocktails and home-style cuisine. I sipped on a refreshing “Laojito” – Champa Kao vodka with lemon grass, kaffir lime, lime juice, syrup and brown sugar – on the woodsy patio set around a lush UNESCO-protected lotus pond. The food was as delectable as the ambience. For lunch we had local pork sausages, steamed fish in dill wrapped in banana leaf, wok-fried buffalo, chicken stew and coconut creme brûlée to finish everything off with a sweet note. The sausages and dessert were the most memorable dishes for me. 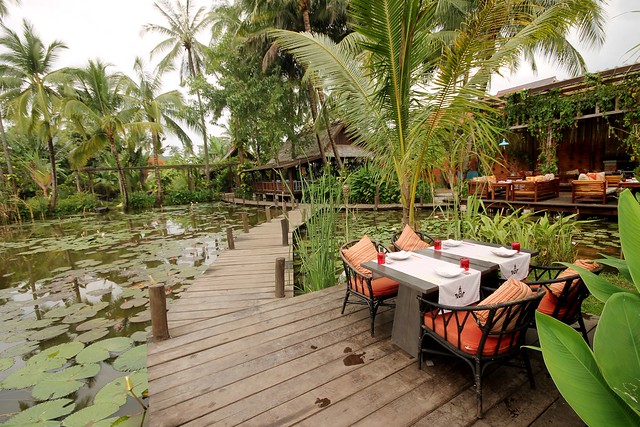 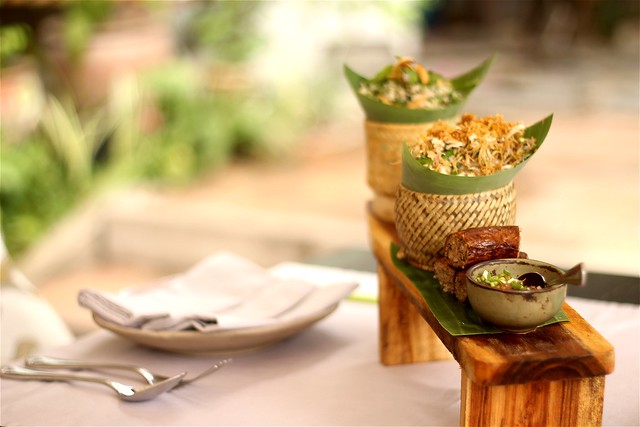 After our sumptuous feast, we went to the Ock Pop Tock Living Crafts Centre for an in-depth look at traditional Lao weaving. We had our first glimpse of the handicraft when visiting a riverside village during our Mekong river cruise from Pakbeng, but there was no detailed explanation of the process. At this award-winning center located along the scenic banks of the Mekong, a local guide elaborated to us how the natural dyes are extracted from certain types of leaves, bark and flowers, as well as the different weaving techniques of different ethnolinguistic groups in Laos such as the Lao-Tai, Hmong and Khmu, just to name a few. Ock Pop Tock is the best weaving center I’ve visited in my travels so far, because not only does it provide a fair-trade venue for preserving cultural traditions but also offer programs for travelers to stay, interact with local artisans, and learn the craft. I bought a set of indigo-dyed placemats for my mother. The center has a boutique store with excellent finished products at reasonable prices, each with tag identifying the weaver who made the item. There’s are rooms and a restaurant, as well, for those who spend more time here. 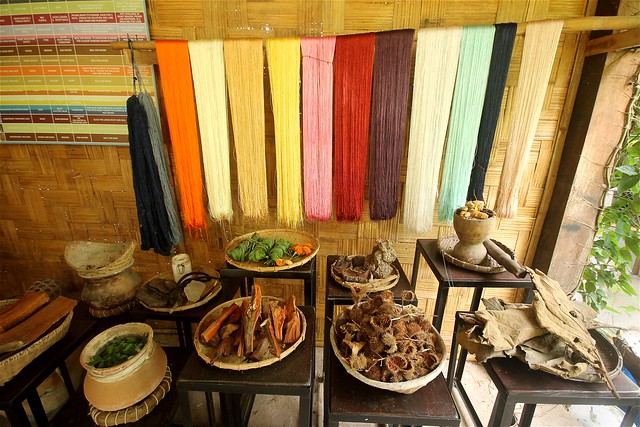 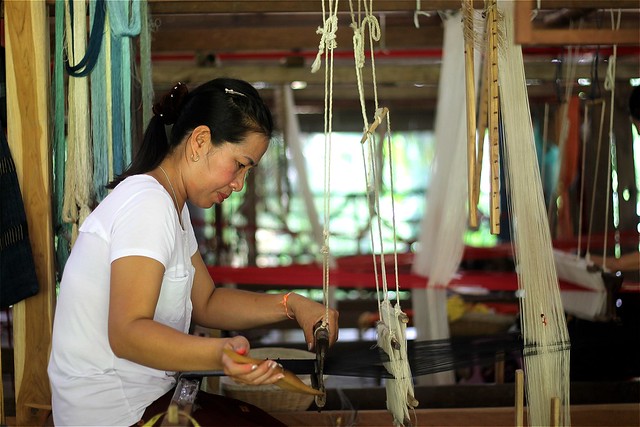 It was late afternoon when we returned to the hotel to rest, before going out in the evening to explore the town on our own. In the evening, I wandered the Handicraft Night Market along the main road of town in front of the Royal Palace, where they sold an assortment of clothing, homeware, jewelry and other knick knacks. I bought myself a souvenir t-shirt with an elephant, then retired into the nearby Coconut Garden restaurant for another helping of Luang Prabang pork sausages and sour chicken soup. I wish I had a few more days to spare to see the rest of the city. We covered most of the top sights, but I felt we just scratched the surface. I think the best way to enjoy the place is to take your time, soaking up the languid atmosphere for a number of days, or weeks even. Nonetheless, our preview of its charms gives me a compelling reason to return.

This blog post was made possible through the Nan-Luang Prabang Media Familiarization Tour from May 22 to 26, 2016, organized by Mekong Tourism. Special thanks to AirAsia Thailand for our Luang Prabang-Bangkok flight.