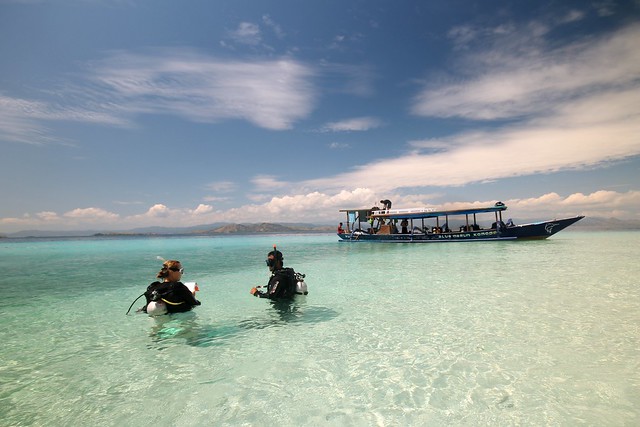 Besides being the only habitat of the world’s largest lizard, another drawcard of Komodo National Park and its gateway of Labuan Bajo on mainland Flores is scuba diving to marvel at its pristine underwater realms. Located within the Coral Triangle – the center of marine biodiversity in the world – its churning waters surrounding 29 islands harbor gorgeous coral reefs and sea mounts bursting with a variety of marine life, including pelagics like manta rays and sharks. However, most of its dive sites are only for Advanced Open Water divers due the strong currents and cold upswells. 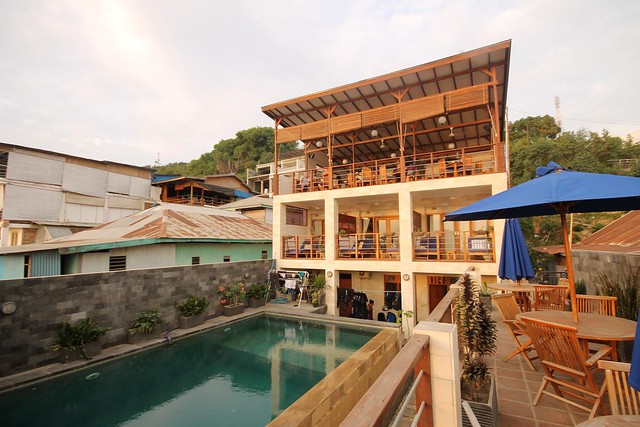 Blue Marlin Dive Komodo is the first five-star PADI resort with the only dive training pool in Labuan Bajo! 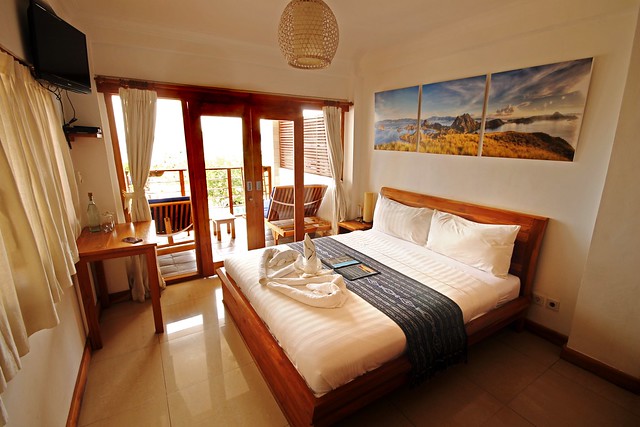 The resort has deluxe rooms with balconies overlooking the pool and harbor.

Nonetheless, there are a number of islands with lighter currents north of the park suitable for beginner divers. These islands can be visited on a day trip from Labuan Bajo, which makes it a viable option for those who only have a limited time and cannot join a live-aboard across several days. During my visit to Labuan Bajo and Komodo National Park with fellow travel blogger Gay of Pinay Travel Junkie, I spent a day diving with Blue Marlin Dive Komodo, the first five-star PADI resort in town, which welcomes divers of all levels and diving styles. Located right along the harbor, the resort has attractive deluxe rooms at IDR 950,000 (PHP 3,500, inclusive of breakfast for two) with balconies overlooking the harbor and the only diver training pool in Labuan Bajo. For those on a tighter budget, they also have dorm-style accommodation for IDR 120,000 (PHP 442) per person. Upstairs, there’s a street-level restaurant with generously portioned meals to be enjoyed with great views of the nearby islands, especially during sunset. Check for discounted room rates here. 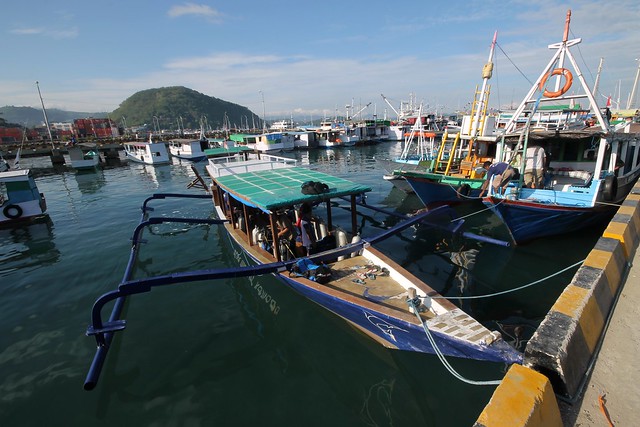 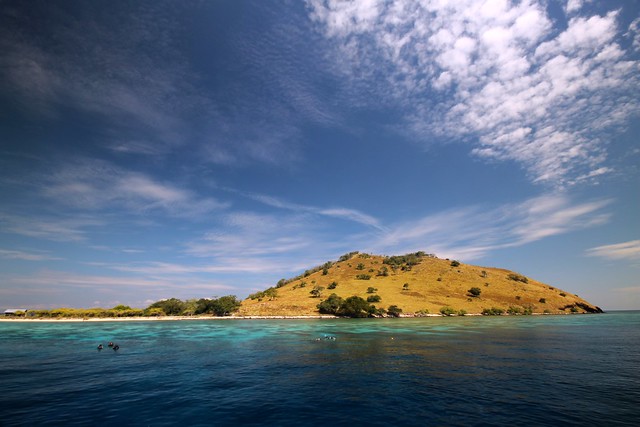 I joined a day trip on Hugo, the resort’s beginner-friendly 100Hp outrigger boat which caters to student and Open Water divers, taking them on daily trips to calmer sites just north of the national park. Leaving the harbor at 8:00 AM, we traveled northwards for 40 minutes to the sister islands of Sabolan Besar and Sabolan Kecil, a pair of grassy hills ringed by white sand and turquoise waters. Our first dive was at the larger Sabolan Besar, descending on a disappointing bed of broken coral – most likely caused by blast fishing – with schools of tiny neon-blue damselfish. However, when we finned deeper down the slope, the coral formations were better. There were anemone fish. I spotted a venomous black-banded sea krait poking its head around dead coral, perhaps hunting for prey. The second dive at Sabolan Kecil was better, as the coral slope had livelier formations of hard and soft corals where I spotted peacock groupers, titan triggerfish and giant moray eels. 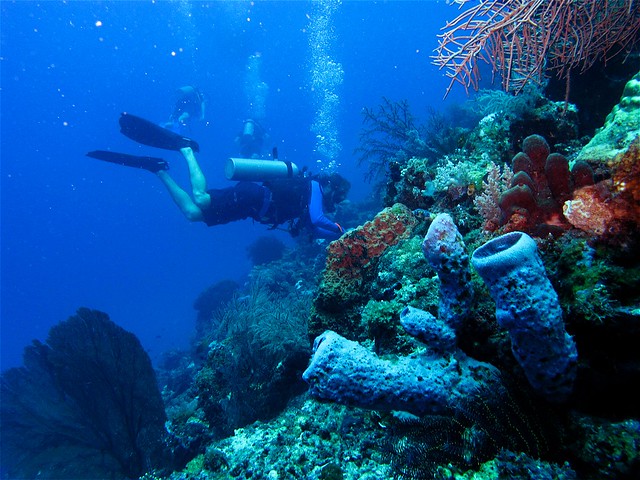 Corals and sponges cover the slopes off Sabolan Kecil Island. 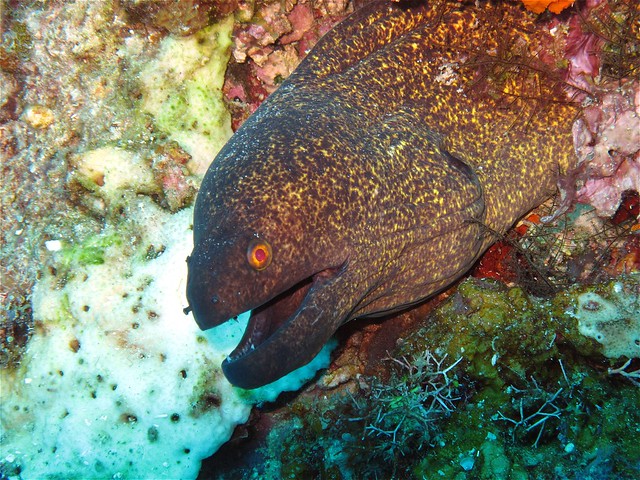 A giant moray eel I spotted at Sabolan Kecil Island!

In between the dives, we spent our surface interval at the beautiful, deserted shore of Sabolan Besar. Dai, our British divemaster, was friendly and professional. And I really appreciated how he wasn’t only focused on making sure we enjoyed our dives, but also imparted techniques to improve our scuba diving skills, such as how to maximize air consumption, so can level-up as divers. Overall, our day trip to the Sabolan islands was a fantastic introduction to scuba diving in Labuan Bajo that doubled a wonderful beach escape, and I’m looking forward to returning again in the near future to see even more stunning dive spots in Komodo National Park. 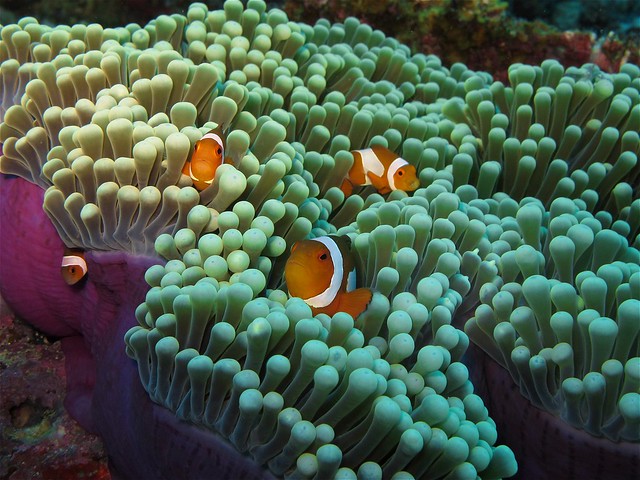 Common clownfishes at home in their anemone abode… 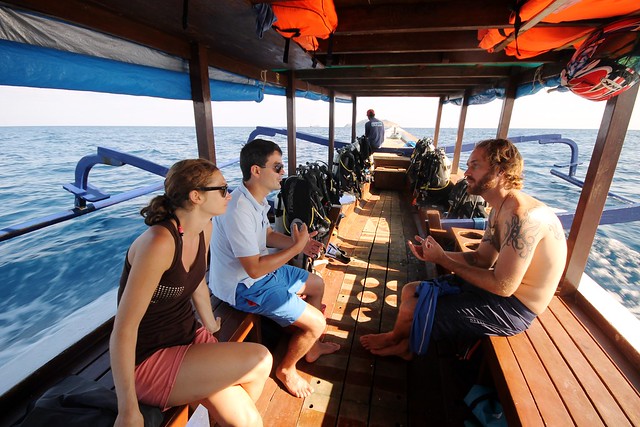 in between our dives, divemaster Dai shares some tips to improve our breathing technique .

A dive trip on the Hugo outrigger boat, which departs daily at 8:00 AM, is IDR 1,200,000 (PHP 4,417) inclusive of two (2) fun dives with gear rental, food & beverage on board and towels. The rate does not include park fees which are currently IDR 175.000 per day (PHP 460, Monday to Saturday) or IDR 225,000 (PHP 828) per day on Sundays. Blue Marlin Dive Komodo also has daily trips for Advanced Open Water Divers and can arrange liveaboards around Komodo National Park.

Komodo Airport, Labuan Bajo is 1 hour and 15 minutes away from Denpasar, Bali by air. Located along the main street of Labuan Bajo, Blue Marlin Dive Komodo is only 10 minutes away (3 kilometers) from the airport. One can hire an ojek (motorbike) or arrange pick-up with the resort.