Nothing gets me excited about visiting Indonesia as much as its mountains of fire. Volcanoes create the most dramatic landscapes, a living testimony to how volatile our planet Earth can be. The country’s rugged arc of islands were formed by a chain of volcanoes along the Pacific Ring of Fire. Presently, the archipelago has more than 120 active volcanoes. On previous trips, I’ve climbed some of the most popular fiery peaks like Bromo, Rinjani and Sibayak. But I’ve always got room for one more. 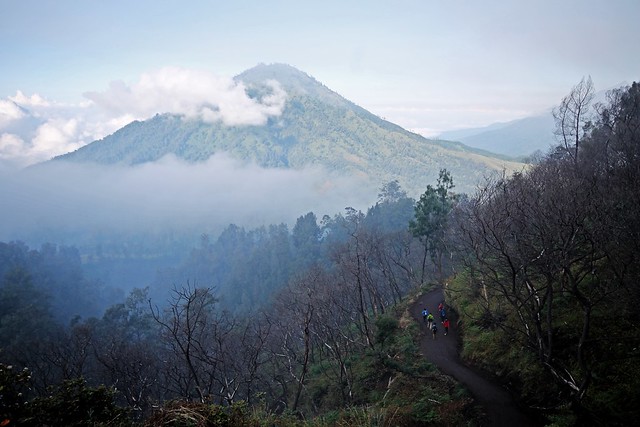 The hiking trail to Ijen Crater passes by Mt. Merapi, the highest point of the Ijen Volcano Complex.

Naturally, I was most excited about the third leg of our Trip of Wonders media tour, which brought us to one of the most visited volcanoes: Kawah Ijen (Ijen Crater), the turquoise-colored centerpiece of a group of stratovolcanoes on East Java. While not as challenging to climb as others, people are still drawn to this particular landscape for a rarely seen natural phenomenon. Taking a whole day’s travel, it was a long haul from Gili Islands, Lombok to Banyuwangi by speedboat and two flights (via Bali and Surabaya).

We set out just past midnight by 4X4 jeep from Ketapang Indah Hotel to the trailhead of Kawah Ijen, 45 km northwest of Banyuwangi city. I was dressed for the cold: three layers of clothing, a beanie and a pair of gloves kept me warm. With only my small head lamp to light the way, I climbed up the paved path up the mountain. It took roughly two hours to reach the crater rim from the trailhead. I was one of the first in our group to arrive at the top.

In the past, most people would only climb up to the crater rim to watch the sunrise. Ijen has long been a hiking destination, but has seen a resurgence in visitors since National Geographic reported the blue fire crater on their website in 2014. Now, hikers also climb in the middle of the night, scrambling down from the crater rim to edge of the lake to witness the mysterious phenomenon. 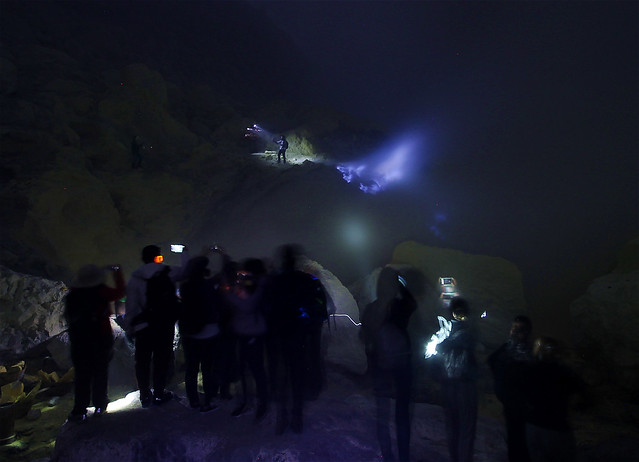 Hikers crowd around the lakeside fumaroles of Ijen Crater. 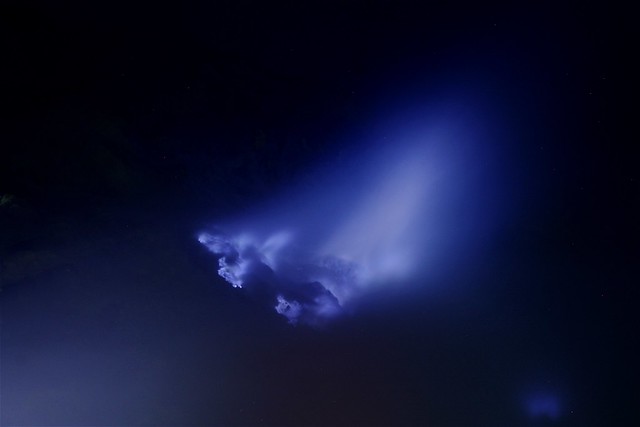 It took another hour to reach the bottom of the crater, where hikers crowded around fumaroles billowing toxic, yellow fumes of sulfur gas. A local guide loaned me an industrial-grade gas mask, which protected me from the dangerous emissions. A procession of torchlights and head lamps traced the pathway of boulders and loose rock. As the wind changed direction, the smoke shifted to reveal the otherworldly glow of neon-blue fire next to the ceramic pipes installed in the volcanic vents to extract molten sulphur. It was a strange and magical sight.

Contrary to some online write-ups, the blue fire isn’t lava. The electric-blue flames are caused by sulfuric gas igniting upon contact with oxygen-laden air. A mesmerizing but dangerous spectacle, these flames can reach 16 feet in height and temperatures of more than 600 C°. Historically, volcanoes emitting blue flames have been reported in antiquity at Mt. Vesuvius and Vulcana Island in Italy. The phenomenon has also been photographed at Dallol Volcano in a remote region of Ethiopia. 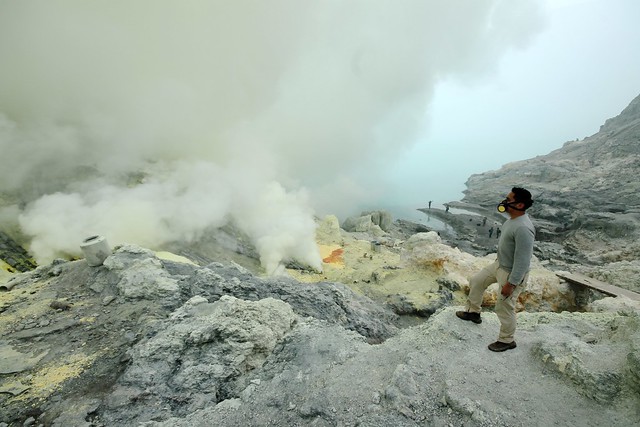 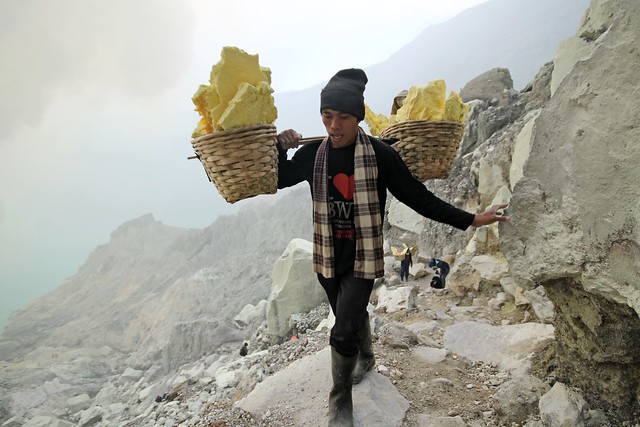 Miners haul up 70 to 90 kg of sulphur on their backs on every trip.

By five in the morning, dawn’s first light made the flames invisible, and illuminated the apocalyptic landscape around us. The fumaroles continued to spew out yellow smoke, which blew across the world’s largest highly acidic lake. Hot sulphur poured out of the pipes, and hardened upon cooling. Miners broke the solidified sulphur and loaded on large wicker baskets, which are painstakingly carried up to the crater rim and down the mountain on their backs. While visitors hike in and out of Ijen for leisure, these miners eke out a living hauling up to 90 kg of sulphur on every trip, earning an average of USD 13 per day. Some miners augment their income by selling souvenir sulphur ornaments. 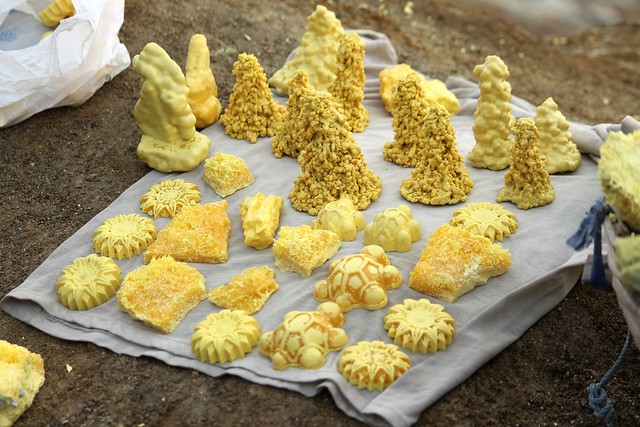 Miners augment their income by selling sulphur ornaments for souvenirs. 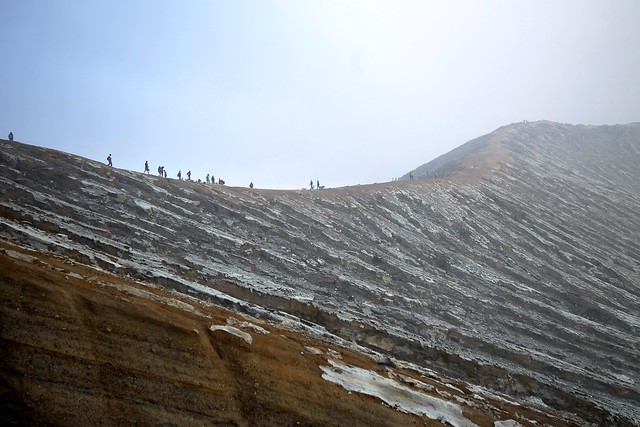 Hikers along the rim of Ijen Crater.

I pitied the men as much as I admired their fortitude working in such a difficult and dangerous environment. The mined sulphur are sent to factories to bleach sugar, vulcanize rubber, and manufacture matches and fertilizer, among other things. Kawah Ijen is one of the last few places on earth where sulphur is still mined the traditional way by hand. Inasmuch as volcanoes bring destruction, we see starkly in Kawah Ijen and its sulphur miners how much we depend on them economically, too.