One Perfect Day at Gili Islands, Lombok – from Sunrise to Sunset 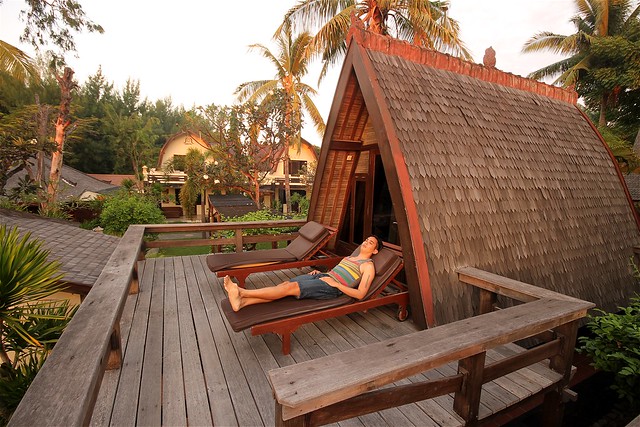 Relaxing at my private beachfront bungalow at Hotel Vila Ombak

Our Trip of Wonders blogger group enjoyed our first taste of island-hopping in Makassar, before striking out for another beach destination rising in popularity – the Gili Islands of Lombok, east of Bali. Most travelers stay at Gili Trawangan (nicknamed “Gili T”), the largest and busiest of the three islands where most of the guesthouses, resorts and restaurants are located. The other two islands are the quieter Gili Meno and Gili Air. Visitors are drawn to the islands’ chalk-white beaches and turquoise waters with accessible spots for snorkeling and scuba diving. There’s also some great nightlife on Gili T. 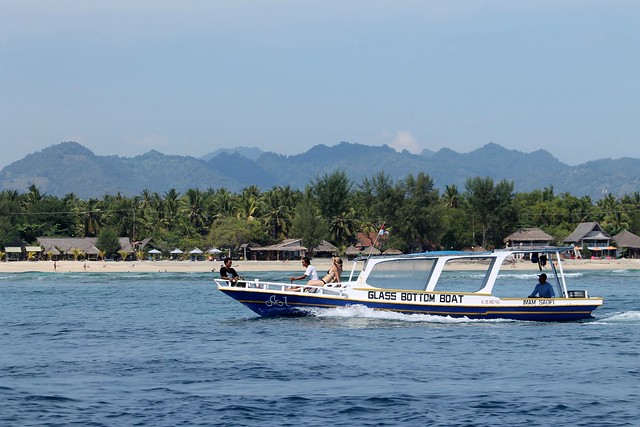 It was my second time at Gili Islands on this trip, but I was no less excited to explore the islands again. I woke up before dawn, stepping out onto the veranda of my beachfront bungalow at Hotel Vila Ombak, then walked to the shoreline fronting the resort just in time to witness the honey-colored sunrise breaking behind the volcanic ridge of Mt. Rinjani on mainland Lombok. The gorgeous morning really made me look forward to the day ahead! 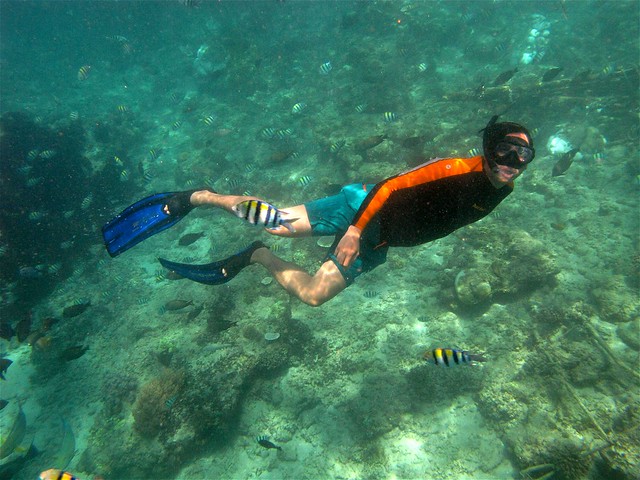 Snorkeling with the reef fishes of Gili Air. 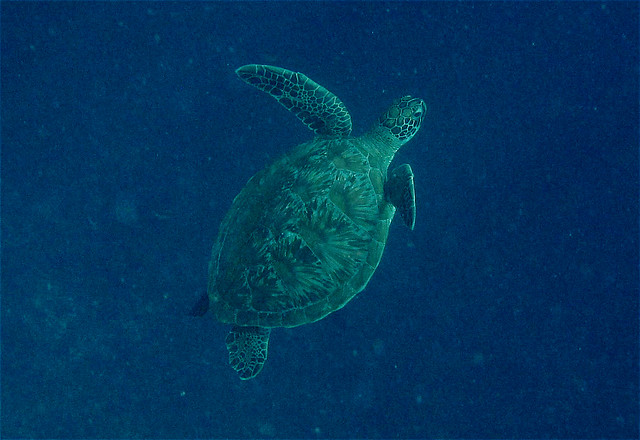 Marine turtles can be frequently spotted off the coast of Gili Meno. 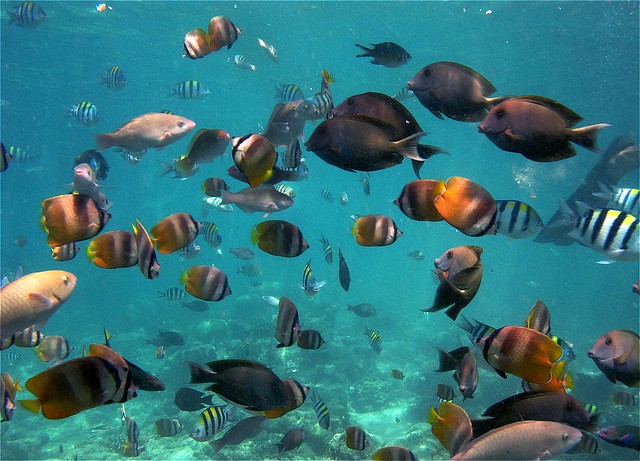 A colorful school at Gili Air.

After breakfast, we quickly set out for a day tour of the other islands on a glass-bottom boat, which first brought us across to Gili Meno where the coral gardens abruptly slope down into open water. Damaged by blast fishing and climate change, the coral reefs here weren’t exactly in excellent shape, but snorkelers still flock here for a chance to spot marine turtles which frequent this coastline. True enough, in a couple of minutes, our boatman-cum-snorkeling guide spotted one! A green sea turtle paddling across the deep blue. It’s hard to keep up with the shy turtles, which seem to be wary of people, as the currents here are considerably strong. When snorkeling at the Gilis, a reliable pair of fins will be your best friend in negotiating the swift currents better. After finding a couple more turtles, we hopped back onto the boat to head out to third island of Gili Air, the closest to the mainland.

Before docking, the boatman gave us one last opportunity to snorkel. The shallower site – which was disappointingly bereft of healthy coral – was nonetheless swarming with reef fish, attracted to snorkelers feeding them with pieces of bread. We were surrounded by a storm of damselfish, parrotfish and wrasse. After an enjoyable but exhausting morning of snorkeling, we enjoyed a generous lunch at one of the restaurants along the main beach. Gili Air had a relaxing atmosphere with less-crowded shores. 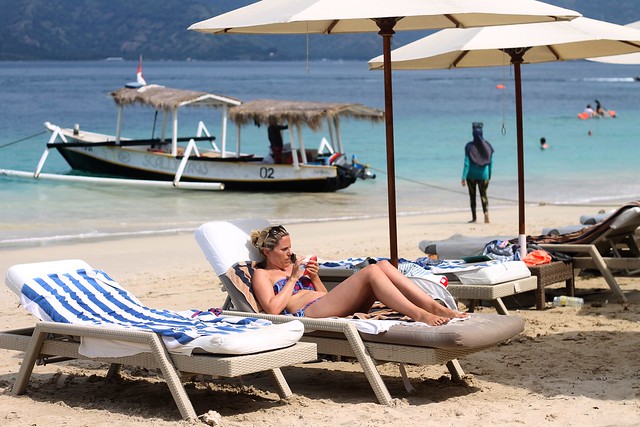 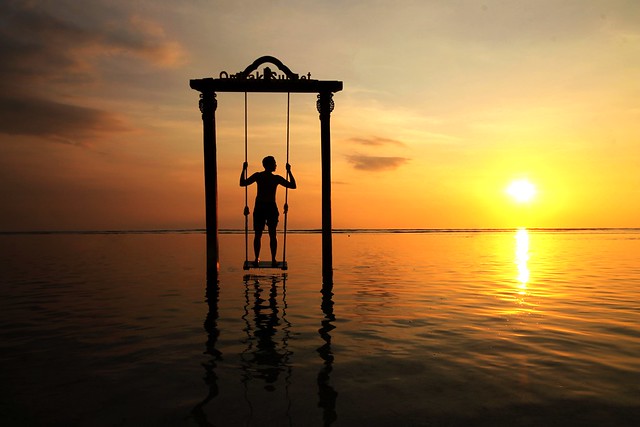 While other decided to relax in their rooms after returning from the boat trip to Gili Trawangan, I had some energy left to explore the island by bike. The island is small enough to circumnavigate on bicycles in a few hours. After a couple of hours’ rest at the resort, I biked all the way to the other side of the island to catch the sunset, together with David and Farah from Malaysia and Vins and Gael from the Philippines. We arrived at the western coast just in time to witness locals bathing the horses in the sea. The animals pull the cidomo or carriages around the island for tourists. It was magical scene. The horses splashed around on the glimmering water, as their caretakers gently scrubbed them clean. As the sun sank further down, we headed down to the famous swings of Hotel Ombak Sunset (the sister resort) set out on the shallow water. The sun became a fiery orb that ended the day as beautifully as it started.