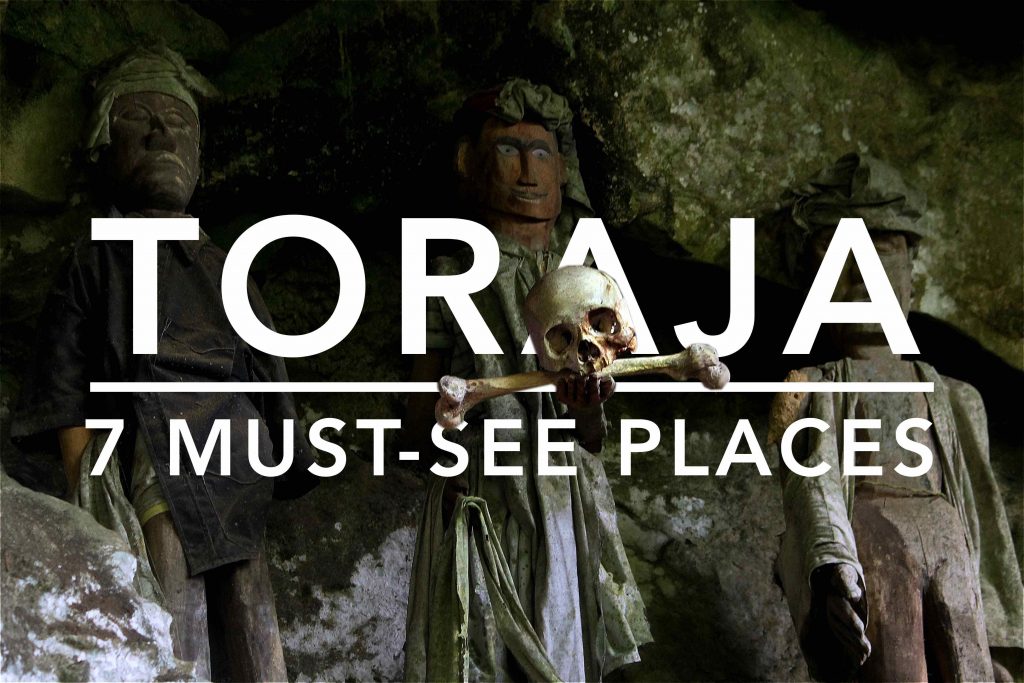 One of the most fascinating cultural destinations in Indonesia is Tana Toraja, literally “Land of the Toraja”, in South Sulawesi. The word Toraja was derived from the Buginese phrase to riaja, which means “people of the highlands”. Nearly half of the 1.1 million Torajans live in the mountain towns of Tana Toraja, 300 km north of Makassar, the biggest city and gateway to Sulawesi island. Despite the distance, travelers are still drawn here, owing to the uniqueness of Torajan culture and heritage. With death and the afterlife being important aspects of their culture, they are best known for their extravagant funeral rites and burial practices. Their horn-shaped traditional houses called tongkonan are also wondrous sights to behold. While flights now link Makassar to Toraja, our media tour, organized by Indonesia’s Ministry of Tourism, opted for the overland route, chartering a bus that shuttled us to the mountain town of Rantepao in less than nine hours. It was long journey but was enjoyable as we had some interesting stops along the way. From Makassar, we first dropped by Rammang-Rammang Karst, 40 km away from the city, to see the marvelous landscape, before bussing onwards. Several hours later, we also had food stops at Pare-Pare, overlooking Makassar Strait, and Bamba Puang, overlooking the vagina-shaped slopes of Gunung Nona or Erotic Mountain. Yes, you heard it, vagina. 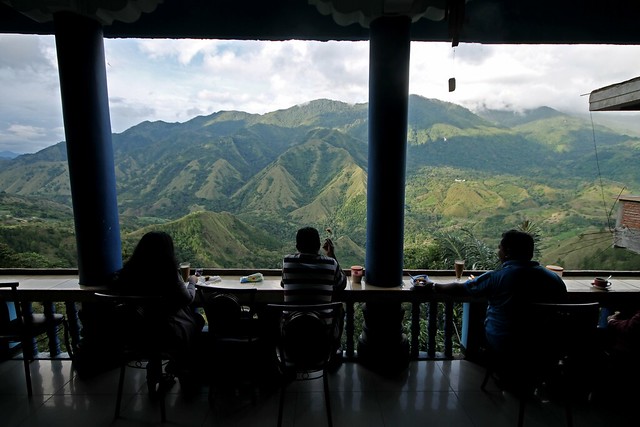 After a good night’s rest in Rantepao, we visited all the best sights of Toraja in a single day, as we had the luxury of chartered bus. In order to save time, one can easily rent a car or motorcycle to visit all the tourist attractions below in one full day. It’s possible to drive on your own, but, in the interest of safety and efficiency, I would suggest hiring an English-speaking driver, who would know the way better and also serve as your private tour guide. Here are seven places in Tana Toraja you shouldn’t miss! 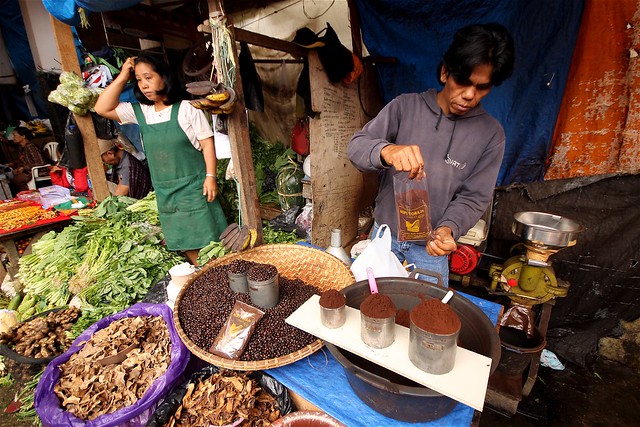 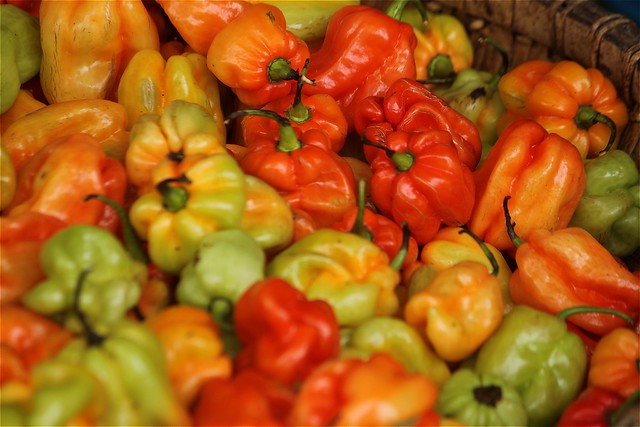 Don’t underestimate the heat of lada katokkon, one of the fieriest chili peppers.

Morning markets are always a great way to kickstart a tour and familiarize yourself with the local culture, like our experience in Luang Prabang. By 7 am, Pasar Pagi Rantepao (Rantepao Morning Market) was bustling with activity, packed with vendors hawking baskets of fruits, vegetables, and fish. While the market exuded an atmosphere akin to most markets found throughout Southeast Asia, there were unique finds like tamarillo, a red-orange fruit locally known as tamarella or terong belanda (“Dutch eggplant), which is often juiced in hotels and restaurants. There were also extremely hot chili peppers called lada katokkon, which we tried as sambal sauce later in day over lunch. Of course, Toraja is one of the places in Indonesia known for its coffee. Its bittersweet smell lured our group to heaps of roasted robusta beans, which were being sold whole and, upon request, ground on the spot. At IDR 20,000 (PHP 76) per liter-sized can, good coffee comes cheap here! (Another great place to buy authentic premium Torajan coffee is Kaa Coffee Roastery, which sources robusta and arabica beans from different farms at IDR 40,000 to 55,000 per 100 grams.) 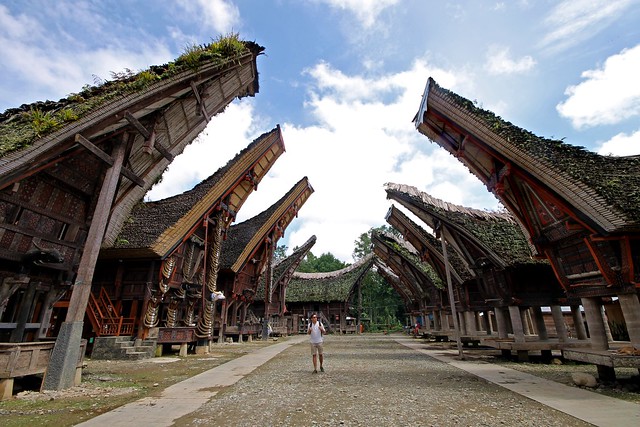 Palawa’ is one of the few remaining villages with excellently preserved tongkonan houses. 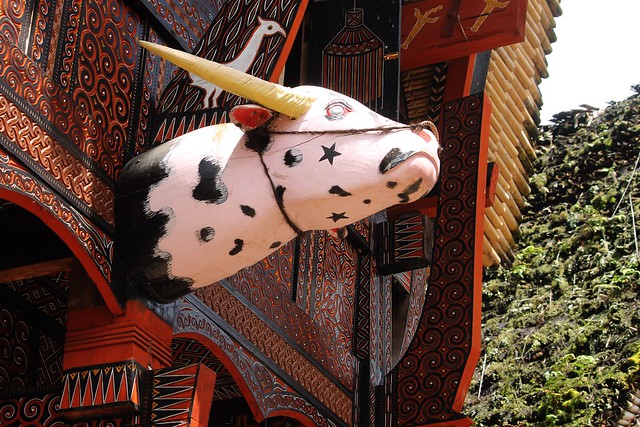 Palawa’s tongkonans are built from ironwood embellished in bas relief and carvings.

It’s hard to miss the distinctive architecture of Torajan nobility called tongkonan with its high-pitched saddleback roofs – a remnant of the people’s maritime roots. They can be found throughout Tana Toraja, and often inspire modern structures like government buildings, buildings and monuments. Our second stop for the morning was the traditional village of  Palawa’, which stands out from other settlements for its 11 excellently preserved houses and granaries called alang neatly standing side by side. This is one of the most photographed destinations in Toraja, often featured in postcards and magazines. Most tongkonans are built with iron roofing but those at Palawa’ still have their original bamboo roofing, albeit covered by clumps of weeds. Looking closer at the houses, one can admire the details of the abstract bas relief carvings painted in red, yellow and black. Behind the granaries are souvenir shops where you can find, besides the usual trinkets, traditional textiles being woven, and antique pieces dismantled from old houses. I was able to buy four pieces of bas relief carvings, included a pa’tedong or water buffalo motif, for only a few hundred thousand rupiah. 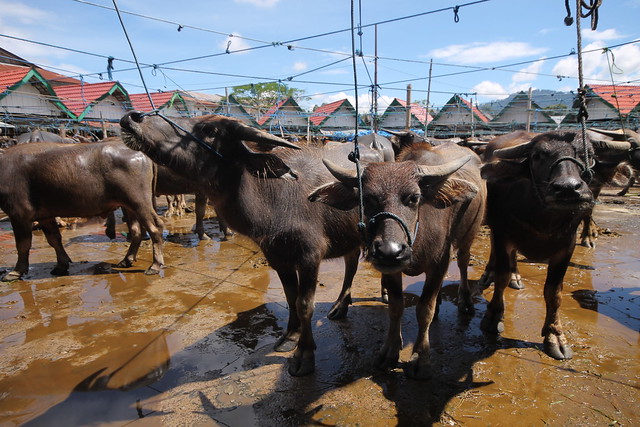 Tedong (water buffalo) are symbols of wealth in Torajan culture. 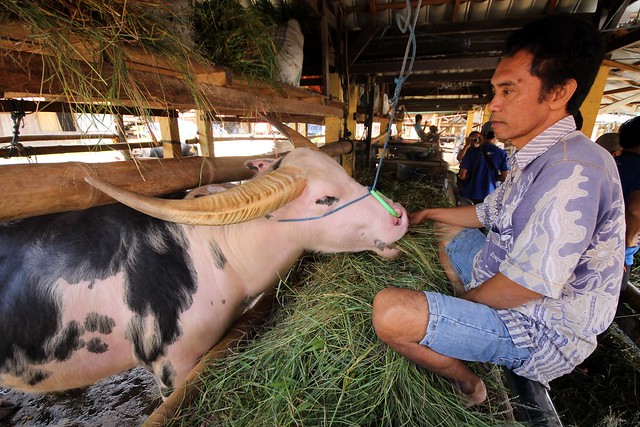 Water buffaloes play a significant role in the society, not only as a beast of burden but also as symbol and measure of wealth. As our guide puts it, “Tying a water buffalo in front of your house is like showing off your luxury car.” They are also ritually sacrificed during opulent funeral ceremonies. The death of a prominent noblemen would require the sacrifice of a hundred buffaloes.  These animals even have their own market where they are showcased and traded called Bolu Water Buffalo Market. Hundreds of buffaloes are sold here everyday, reaching its peak during funeral season. Their prices are dictated by the animal’s size, color and pattern. A small black water buffalo would cost about five million rupiah. Among the prized buffalos is the tedong bonga or spotted buffalo which can fetch tens of millions, while albino ones with unique pattens can reach hundreds of millions. During our visit, the most expensive buffalo for sale was an 800-kilogram albino thirteen-year-old costing 700 million rupiah – that’s USD 52,700 or PHP 2.6 million! 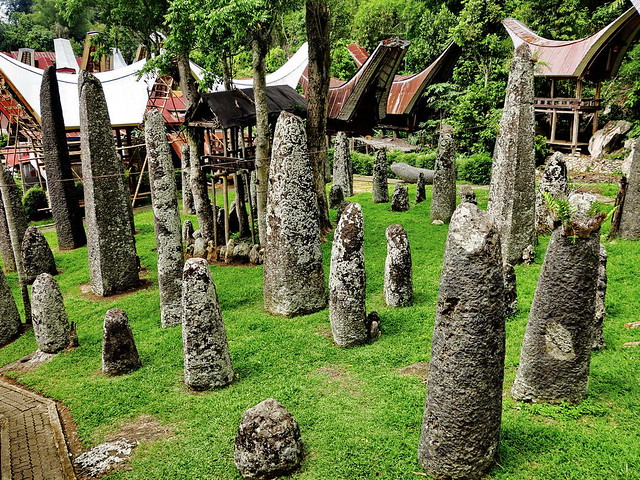 Menhirs are large upright stones, often erected by various cultures around the world. In Bori Kalimbuang, there are over a hundred menhirs or megaliths of different sizes, each ceremonially put in place when a community leader passes away. This is a custom still practiced today, making Tana Toraja the only living megalithic culture in the world.  This would have been another fascinating stop in the itinerary, but unfortunately for our group a landslide caused by frequent rains has made the access road to the village virtually impassable for large vehicles. 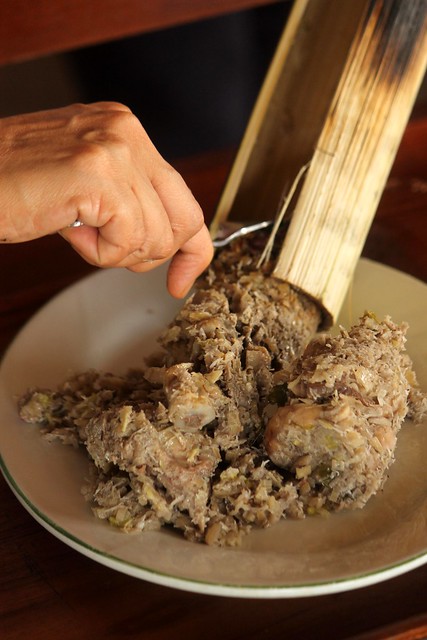 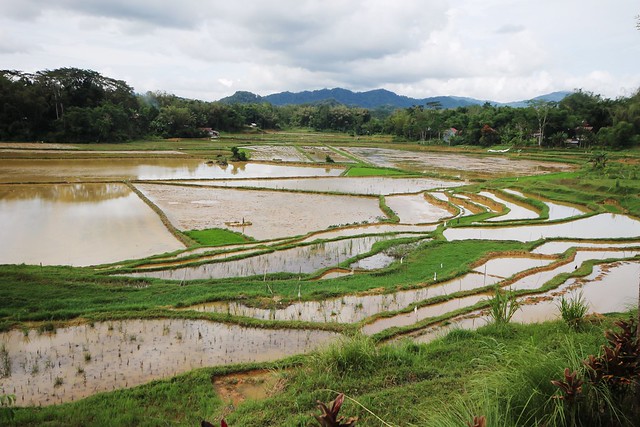 Peaceful views of the rice fields from Sallebayu Restaurant.

Torajan culture has its unique culinary offerings which you shouldn’t miss out on your visit. For lunch, we went to Sallebayu Restaurant, a quaint open-air joint that specializes in Torajan cuisine. The rustic restaurant had a wonderful ambiance as the dining area overlooked rice terraces. We feasted on grilled carp, paku (fern) salad, red rice and pa’piong, native chicken and banana stem cooked in bamboo. The dishes were accompanied with one of the hottest sambals made from local peppers called lada katokkon and washed down with tamarella juice. Everything was delicious. Or as they say in Bahasa Indonesia, enak! 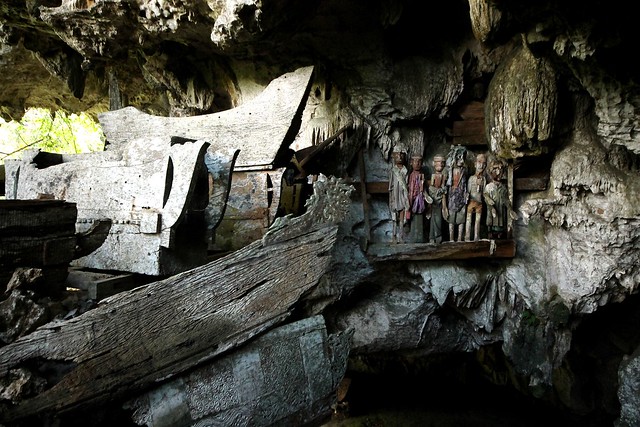 Tampang Allo is a 500-year-old burial site for local rulers. 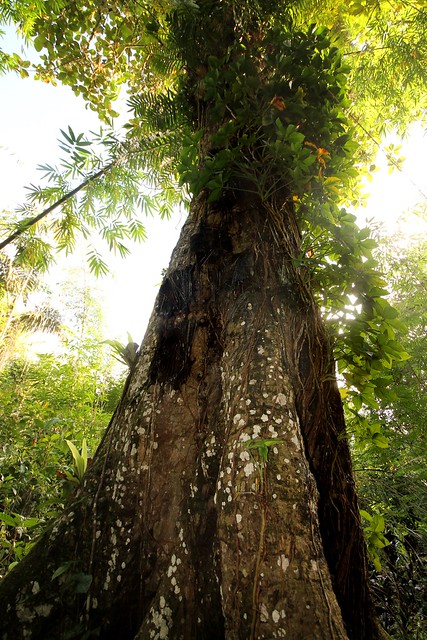 Deceased infants are interred in “baby graves” inside living trees.

In the afternoon, we first visited Tampang Allo, a natural cave used as a burial site for local rulers since the 16th century, located in Kaero village. Inside the cave, skulls and bones are piled along the walls and on boulders, having fallen from the decaying wooden coffins carved in animal-like shapes. Guarding from the rock shelves are three-foot tall tau-tau, wooden effigies representing the deceased. The cave sure looks eerie, but surprisingly I wasn’t scared. A few in our group found the site unsettling, while it was a serene experience for me. A short walk away from the cave into the forest are the “baby graves”, where infants are interred inside living trees. This is a traditional practice disappearing in Tana Toraja, as most now practice Christian burials. 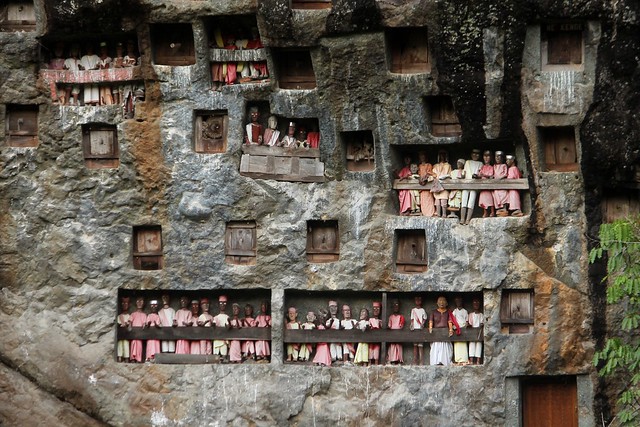 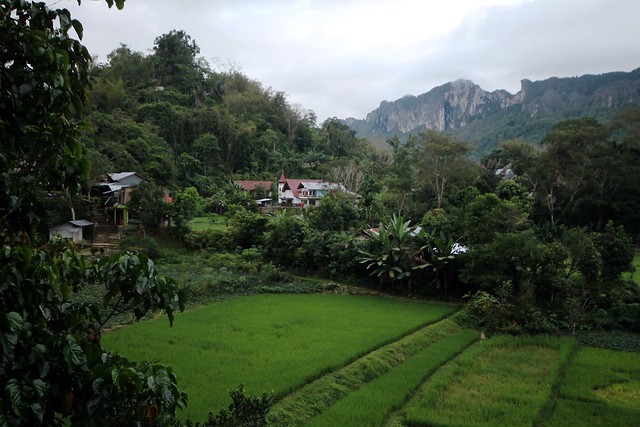 View of Lemo village from the burial site.

Aside from Palawa’, one of the most iconic tourist spots of Tana Toraja is Lemo village, our last destination for the day. Here, the dead are interred in rock walls and giant boulders. This burial site was established in the 16th century. The most prominent area is a 20-meter tall cliff overlooking rice fields, containing 75 niches and shelves of tau-tau standing in rows, carved out by hand. Behind this rock wall are more niches and walking below are the workshops of tau-tau carvers, who sell also them in different sizes as souvenirs. Before it got dark, we had to return to the bus and return to our hotel. 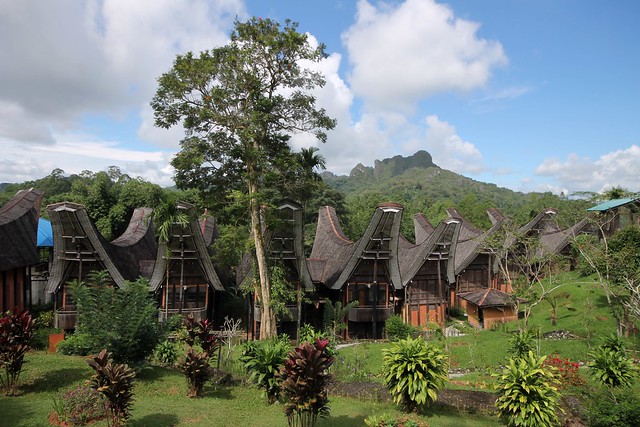 Rantepao – the main gateway to Tana Toraja – is eight to ten hours away by bus (IDR 70,000 to 150,000) from Makassar, the capital of South Sulawesi, which is linked by direct flights from Kuala Lumpur, Singapore, Jakarta, Denpasar (Bali) and other major Indonesian cities. Transnusa and Susi Air also serves one-hour flights to Pongtiku Airport in Tana Toraja from Makassar’s Sultan Hasanuddin International Airport.

We stayed at Toraja Heritage Hotel, a beautiful, sprawling mountain resort with tongkonan-inspired accommodations, a restaurant and outdoor swimming pool. Room rates start at IDR 950,000 (PHP 3,611, inc. tax and service charge) for a double or twin room, inclusive of breakfast. For other places to stay in Tana Toraja, find discounted rooms here.