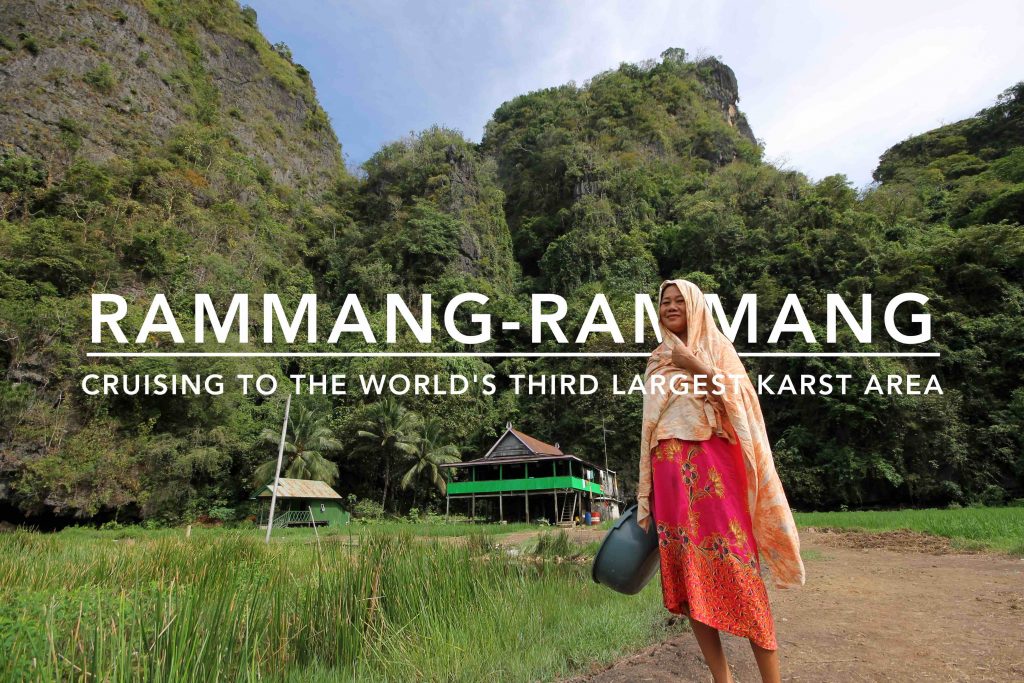 The octopus-shaped island of Sulawesi is one of the lesser-known corners of Indonesia, a vast country of more than 15,000 islands, so I’m always excited to visit.   Last year, a multi-destination blogger tour organized by the Indonesia’s Ministry of Tourism had us exploring the sights of Makassar, the capital city of South Sulawesi, as our first leg. It was my visit time to set foot on Sulawesi, and we had an incredible time discovering its Dutch colonial heritage, scenic waterfront, and pristine offshore islands.  I had another opportunity to visit this year through an invitation from the same tourism body, this time to explore Tana Toraja, the cultural heartland of the Toraja people farther inland. Sulawesi may be located just south of Mindanao, but since there are no direct flights, getting there can be an ordeal. It was a long first day, flying to Makassar from Manila, via Singapore and Jakarta.  And while Toraja is now linked by flights to Makassar, we took the overland route to get there, after a night’s rest at our amazing accommodation, Aston Makassar Hotel & Convention Center. (If you’re looking for a place to stay in Makassar, find discounted rooms here.) 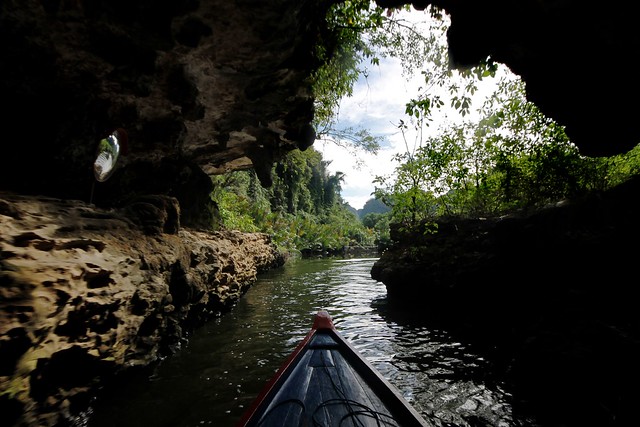 It takes a 20-minute boat ride down Pute River to reach Rammang-Rammang’s interior.

Before embarking on a nine-hour journey by chartered bus to Toraja, we stopped by the Rammang-Rammang Karst in Maros, 40 km north of Makassar City. The landscape derives its name from rammang, the Makassarese word for “cloud” or “mist”, referring to the fog that frequently blankets the scenery early in the morning. The so-called “stone forests” of Rammang-Rammang cover a vast area of more than 45,000 hectares, making it the world’s third largest karst area after Tsingly in Madagascar and Shilin in China. 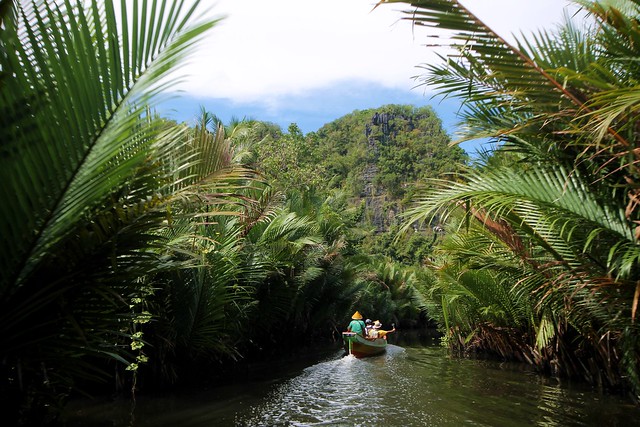 The Pute River is densely lined with nipa palm, an important source of materials for villagers. 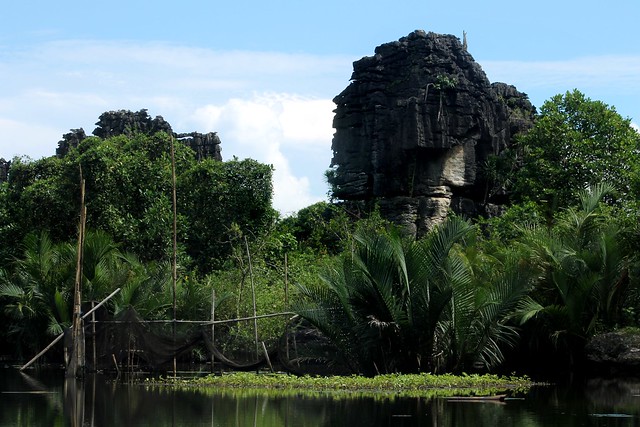 One can see some of the “stone forests” along the way. 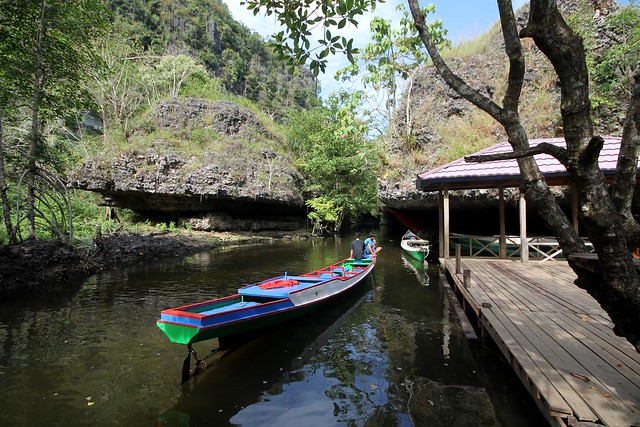 Arriving at the wooden dock of Kampung Berua.

Some of Rammang-Rammang’s limestone towers can be admired from the roadside, but to see the best sceneries in its interior, we had to board a colorful motorboat along the narrow and winding Pute River at a small dock not far away from the main highway. The river was lined with dense groves of nipa palms, whose fruit, we were told, locals make into liquor just like in the Philippines! The limestone hills grew closer, as we cruised deeper down the river.  Now and then, we would pass by stilted houses right along the riverbank, and slip beneath makeshift bridges made of bamboo, which were built so low we had to duck as our vessel purred past. My favorite part of the boat ride was passing sections of the river that funneled through narrow gorges and tunnels, like a theme park ride. 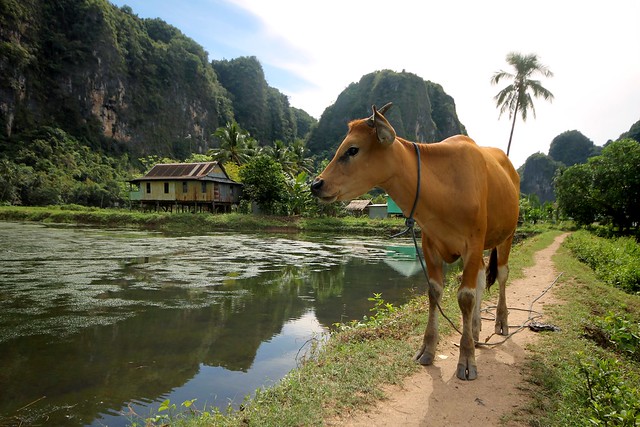 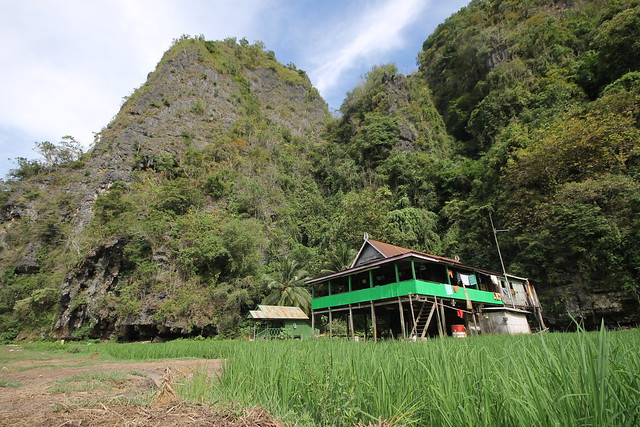 A traditional Bugis-Makassar house at the foot of the karst hills.

After traveling upriver for 20 minutes, we docked at Kampung Berua or “new village”: a rice field accompanied by a few traditional houses and mosque, fenced in by imposing limestone peaks, which reflected beautifully in the fish ponds and water-filled paddies bereft of rice. Reminiscent of  the dramatic countryside of northern Vietnam,  the village was the very picture of rural serenity. The bright morning sun brought out the colors of the surroundings. I walked down the boardwalk from the dock and rambled around the rice field, drinking in views of the majestic karst hills rising over the bright-green expanse, dotted by a few cattle and villagers nonchalantly going about their daily work.  Ducks queued into the rice paddies, and dragonflies perched on blades of grass. It’s a shame that we only had a few hours to visit Ramang-Rammang, as the village, while already very scenic, only serves a jumping off point for adventurous treks within the protected area to explore caverns and more geological formations like the stone forest. Before long, we had to return to the jetty and board the bus for the whole day’s journey to Rantepao, our home base in Tana Toraja.