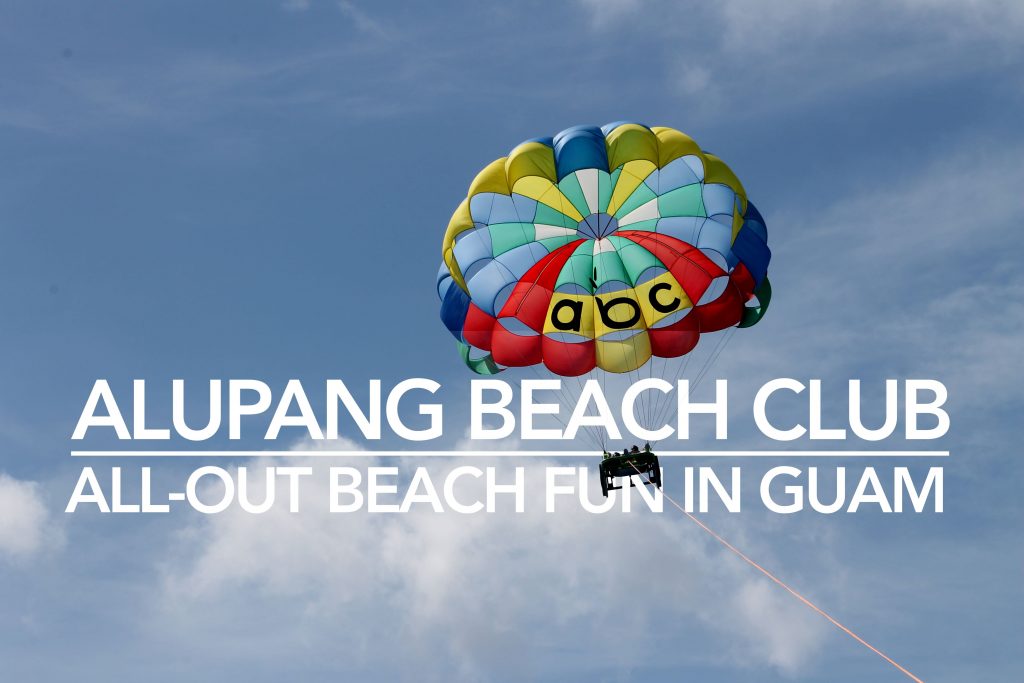 After spending my first two days in Guam just relaxing at Pacific Star Resort & Spa, a great full-service beach hotel along Tumon Bay, I was ready to pump up the adrenaline with outdoor activities organized by Alupang Beach Club (ABC Guam), a beach resort along Hagatna Bay, 6 km away from the tourist area of Tumon Bay.

Their free shuttle bus fetched me at the hotel, and brought me to the beach club in just 15 minutes. Upon arriving, I was quickly assigned my time slots for the activities for the entire day. I was impressed with how organized they were, even with so many customers – most of them tourists from Korea, Japan and China. The multilingual staff was also very friendly and accommodating. 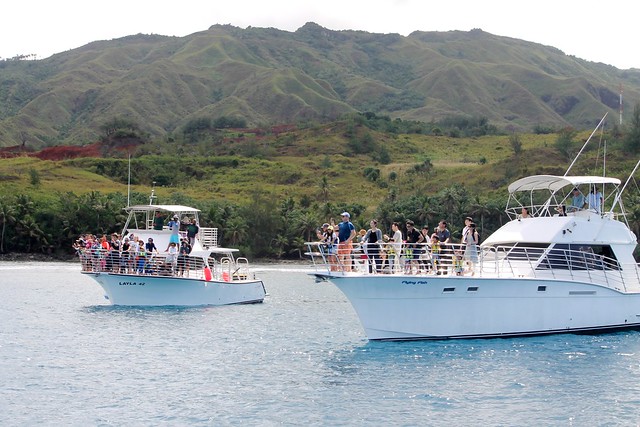 Sightseeing boats observe dolphins off the west coast of Guam. 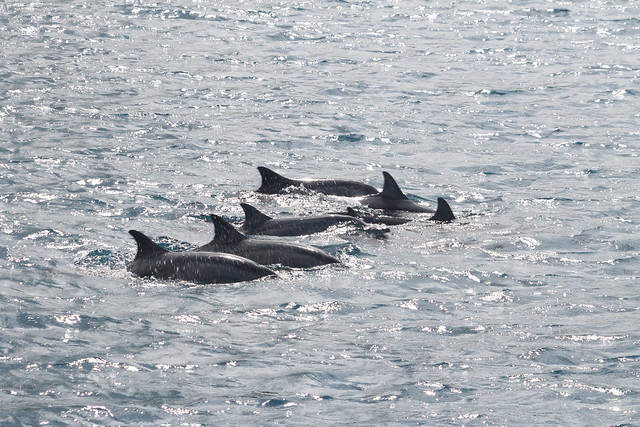 A pod of spinner dolphins are spotted near the mainland coast.

My first activity was dolphin watching. After changing and stowing away my stuff in the locker provided, I boarded the shuttle bus which brought us to Agat Marina on the western coast of the island in 30 minutes. Here, we boarded a catamaran yacht, which brought us out to look for dolphins. The vessel traveled southwards towards an offshore rocky islet called Anae Island. This side of Guam was rugged and undeveloped; the coastline was reminiscent of Batanes, an isolated cluster of islands in the Philippines known for its scenic seascapes. A few other boats were already in the area, observing a pod of spinner dolphins near the mainland’s coastline. We observed the dolphins circle the area, their fins slicing across the surface of the water, for about half an hour before moving closer to the island to go snorkeling. Those who didn’t want to get into the water had the option to go bottom fishing on deck.

Our group returned to ABC for a lunch buffet of fried chicken, kimchi and Filipino pancit noodles, while some staff members entertained us with coconut demonstrations, showing how coconut meat is grated from its shell the traditional way and how coconut fronds can be woven into headbands – practices that can be found in the Philippines as well. 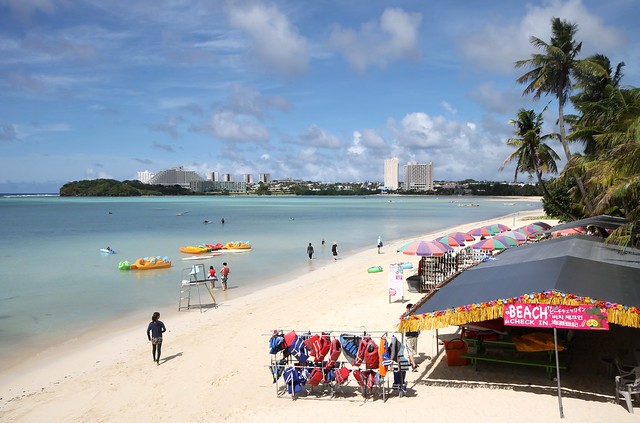 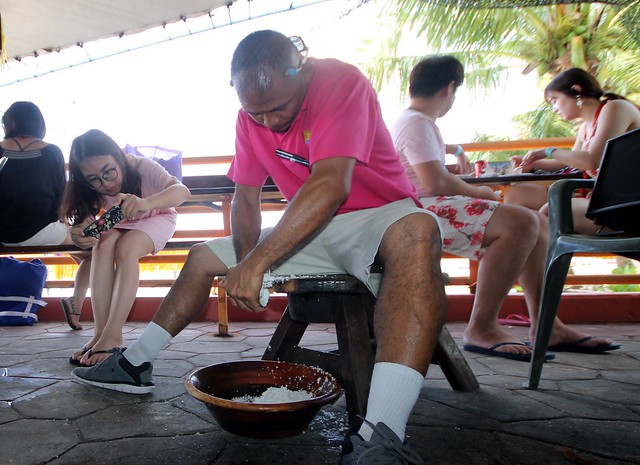 I was most excited for the next activity after lunch. It was my first time to go parasailing. ABC Guam is the only tour operator offering chair-type Skyrider parasailing in Micronesia. Departing from Hagatna harbor, a speedboat brought out our group out into the bay. Our group took turns in pairs getting on the Skyrider, which was easy to get on since it was chair-type parasailing without the need to strap on harnesses. The seat was comfy as a living room couch, but was still a bit unnerving since it had no seat belts to secure you in place. As the speedboat revved its engine, the wind pulled up the parachute, lifting the chair high up in the air behind the boat. As the chair rose several stories up, the boat shrank away and I could see the entire bay. It was a breathtaking ride, and definitely the highlight of my day with ABC Guam. 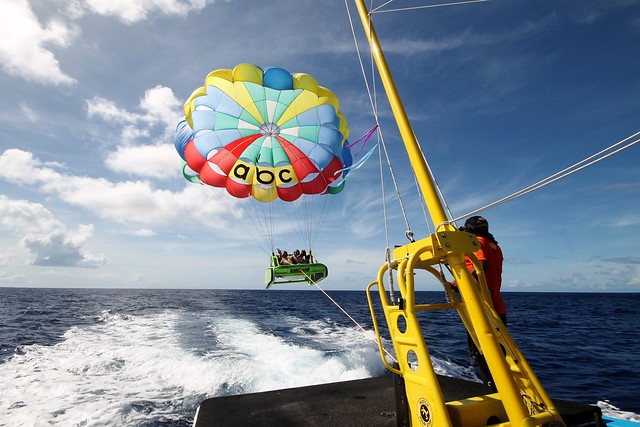 Returning to ABC, I gave other water sports offered for a spin, like the jet ski and banana boat. The beach club also has non-motorized equipment like kayaks, stand-up paddle boats, pedal boats and beach floats. ABC definitely offers everything you need for an all-out beach adventure in Guam!

Tours and activities may be availed separately, but combination packages offer great value for money, most especially their bang-for-buck full package which includes the dolphin watching and snorkeling/fishing tour, parasailing, jet ski and other water sports for only USD 160 (PHP 8,324) per adult and USD 50 (PHP 2,601) per child, aged 6 to 13, inclusive of hotel transfers, lunch buffet, cultural demonstrations, and gear (snorkel, mask and aqua shoes) and locker rental.

My first #parasailing experience with @abcguam at @visitguamph! 🐦 Go all out with their best-value full package, includes dolphin watching, snorkeling, all water sports, buffet lunch, gear rental, and hotel transfers for only USD 160 per adult and USD 50 per child, aged 6 to 13. Shot with #Supremo4K by @supremoworld #abcguam #alupangbeachclub #visitguam #wheninguam #guamweekly #guamazing #guam #micronesia #supremoworld

Only 15 minutes’ drive from Tumon, ABC Guam offers free transfers between major hotels in Tumon  and the beach club between 8:00 AM to 4:00 PM. Do note that ABC Guam is closed on Saturdays.