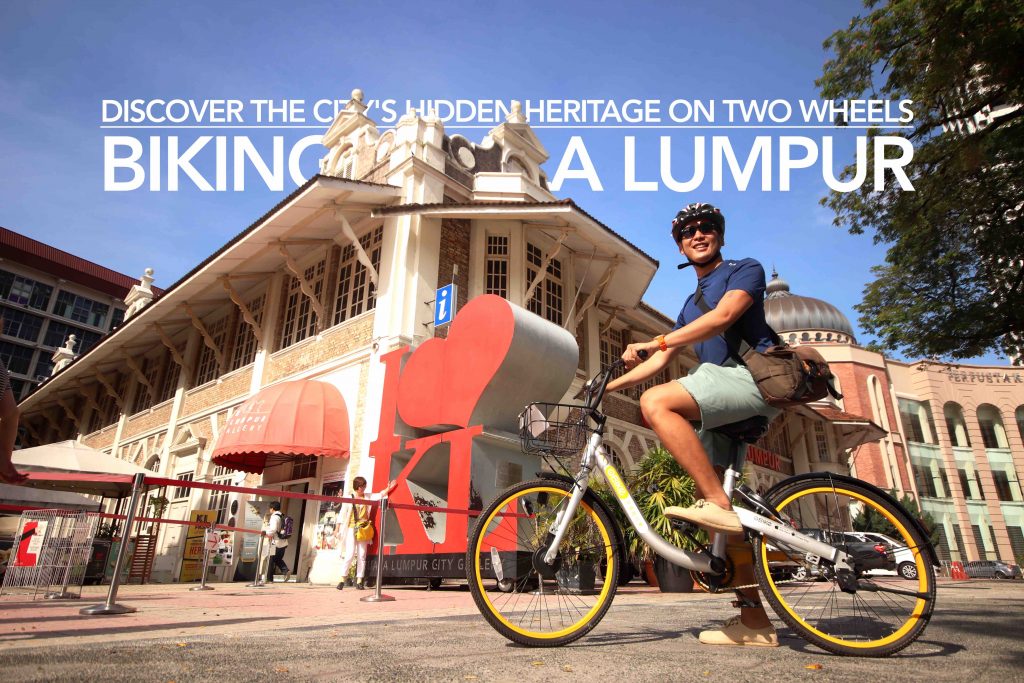 Just when you think you’ve seen all that Kuala Lumpur has to offer, local tour operator Bike with Elena offers an eye-opening bicycle tour of the Malaysian capital’s hidden heritage – some of them vanishing as urban development quickly transforms the cityscape.

The following day after checking in at the all-new Hilton Garden Inn along Chow Kit Road, our media group bussed to the KL City Gallery at Merdeka Square to meet up with tour guide Elena Mei Yun and pick up our wheels from oBike, an app-enabled bike-sharing platform. Cutting through main thoroughfares and weaving through narrow alleyways, Elena showed us fresh perspective of the city, introducing little-known or overlooked heritage attractions along the way. 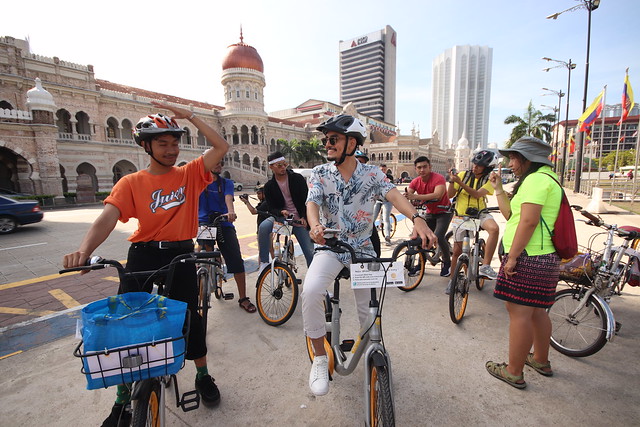 Our bike tour kicked off at Merdeka Square, an open space fronting the iconic Sultan Abdul Samad Building built in 1894 to 1897. It was here that the Malayan flag hoisted for the first time at midnight on August 31, 1957, hence it’s name which means Independence Square. Before the historic event, this public space was used as a cricket green for the Selangor Club. 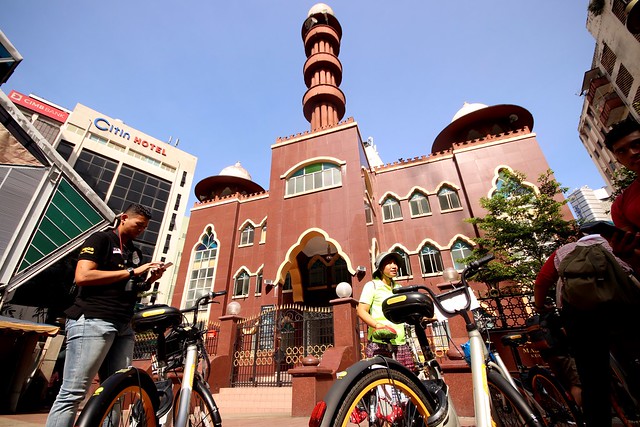 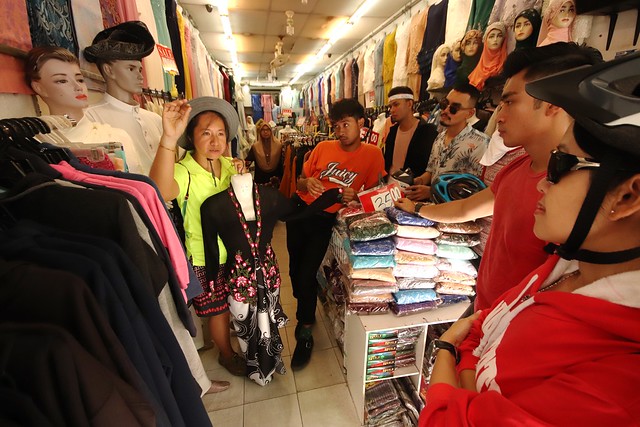 Originally built out of bricks and timber in 1863, Masjid India was the only mosque catering to Indian Muslim community in the city centre. To accommodate more worshippers, the old structure was replaced with a three-story mosque in 1964, and later renovated in 1999 and 2002. The surrounding area is a popular destination for shopping and eating out with its numerous pre-war shophouses and traditional food options. After dropping by outside the mosque, Elena took us to a clothing store selling traditional Malay clothing, where she explained the origins of the baju kebaya. 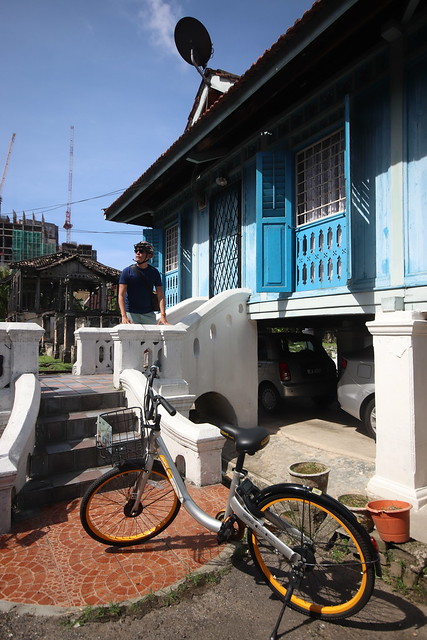 Gazetted by the British in 1899, Kampung Baru is a slice of Malay village life in the heart of Kuala Lumpur. Located on covered real estate with views of the iconic Petronas Twin Towers, the neighborhood is dwindling in size as many traditional homes fall in disrepair, or have been demolished to make way for modern developments like shopping malls and condominiums.

One of the best preserved home is Master Mat’s House, which blends Malay and Palladian architectural styles, raised on stone pillars with a concrete balustrade staircase. It was owned by Ahmad Mohamed – more popularly known as “Master Mat” – a respected former headmaster of an English school. Near the house was a small backyard garden where Elena pointed out a curry bush, whose leaves are an important ingredient in Malay cooking. 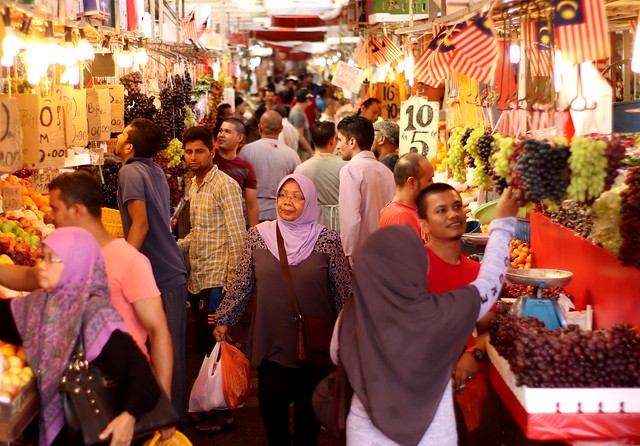 Infamously known as the city’s red-light district, the sub-district of Chow Kit is also home to Kuala Lumpur’s largest wet market. Elena walked us through the labyrinthine stalls of the market selling a variety of halal meats, seafood, spices and vegetables. After explaining different kinds of spices, Elena had us taste petai, a native bean with a pungent smell and bitter taste. I tasted the strange vegetable which I first encountered on previous backpacking trips to Indonesia. I still wasn’t amused by its taste (perhaps I needed some sambal with it), and washed it down with durian cendol, a shaved ice dessert, to also beat the midday heat. 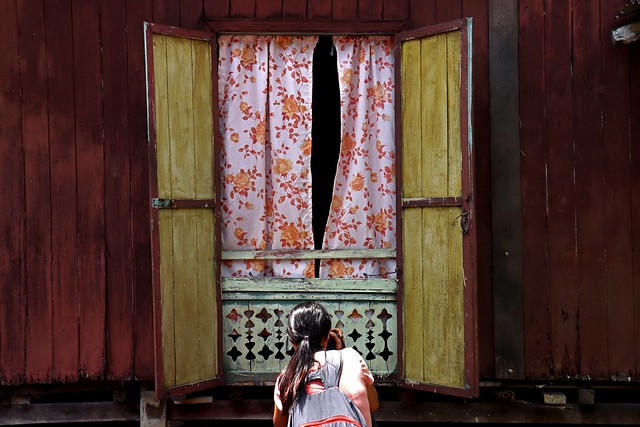 Finally, before retracing our path back to Merdeka Square, we dropped by a humble century-old Malay house, owned by Puan Nafsiah. Located outside the heritage zone, this traditional wooden dwelling is threatened by city developers eyeing the prime real estate it stands on. If nothing will be done to protect it, this abode might also vanish before city residents realize it’s worth as a heritage building.

For every booking of Hidden Secrets of Kuala Lumpur, Bike with Elena pledges MYR 20 contribution per adult bike tour participant to this heritage home.

This blog post was made possible through Kuala Lumpur, Lah!, a media tour held last March 12 to 15, 2018, organized by Gaya Travel Magazine.